Apple and Tesla turn spotlight back on stock splits

Two of the main companies behind Wall Street’s great coronavirus rally of 2020 just put the issue of stock splits back on the corporate agenda — and may have added fresh fuel to the stock market’s recent advance.

After equities trading ends this week, Apple will hand its shareholders four shares for every one they already own, while Tesla will complete a five-for-one split.

Their moves have brought attention to an idea that has largely fallen out of corporate fashion. The number of share splits among companies in the S&P 500 topped 100 a year in the bull market of the late 1990s, but has dropped into the single digits since 2016.

The sight of two prominent companies returning to the idea — and the explosive growth in their shares in the days since — could change that. A small handful of big tech stocks already account for much of the market’s gains, said Stephen Dover, head of equities at Franklin Templeton. If others follow with splits of their own, it could add to “a frothy market”, he said.

Apple’s shares have climbed 32 per cent since it announced surprisingly strong quarterly earnings last month, along with its plans for the split. Tesla has jumped 57 per cent since news of its stock move on August 11, extending a powerful rally in the absence of any new information on the state of its business.

It is impossible to tell whether the splits have contributed to the share price spikes. But the action by two stock market favourites has led many other companies to look into the issue and ask whether they should follow suit, said Howard Silverblatt, senior analyst at S&P Dow Jones Indices.

READ ALSO  Is Trump Using JCPOA To Break The UN Before It Breaks Him?

In theory, a stock split should make no difference to the attractiveness of a company’s shares. Other things being equal, the nominal price of the stock should fall to reflect the increased number of shares in issue. But the psychological effects are less predictable.

There were stronger reasons to act in the heyday of stock splits. Besides keeping the price low, making it easier for retail investors to buy a small number of shares, splits also had the effect of reducing stock trading commissions for smaller investors, said Mr Silverblatt.

Those attractions have waned as commission-free trading platforms and fractional shares made it easy for small investors to put as much cash as they want behind their favourite stocks.

But there may still be psychological advantages to making it easier for individuals to own whole shares in the companies they admire, several analysts said. Both Apple and Tesla want to appeal to millennial consumers and could benefit from attracting them as investors, said Mr Dover.

It “could result in a temporary lift” as more retail investors are drawn in, said Max Gokhman, head of asset allocation at Pacific Life Fund Advisors. Active stock traders looking to profit from the momentum behind stocks such as Tesla may then accentuate the movement, he said, though the effects are likely to dissipate after a short-term bump.

Academic research has long pointed to superior stock market returns from companies that split their shares. Two studies from the mid-1970s to 2003, for instance, highlighted an excess return of 8 per cent in the first year after a split, extending to 12-16 per cent over three years.

Whether there was a cause and effect at work is open to question. “It’s quite true that some stocks after they split have gone up — but that has nothing to do with the splits themselves,” said Mr Dover.

Rather, he said, it reflected the continued success of the companies, which was already shown in the high share prices that led to the splits in the first place. 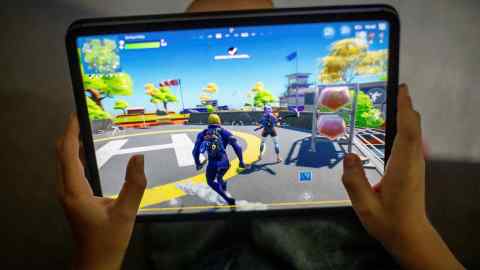 The Apple and Tesla moves, meanwhile, have drawn particular attention to two other tech companies whose shares have reached very high nominal levels: Alphabet, whose shares rose above $1,600 for the first time this week, and Amazon, which topped $3,400.

Both have split their stocks before — though in ways that proved controversial, making it harder to judge whether they will return to the idea now.

Amazon announced three splits in quick succession during the dotcom bubble of the late-1990s, increasing the number of its shares 12-fold. Its stock price fell below $6 in the bust that followed, adding to perceptions that the company was in trouble as bankruptcy rumours swirled.

Google, meanwhile, split its stock only once, in 2014, giving shareholders a new, non-voting share for every share they already owned. The split cemented the long-term control of the company’s founders — a controversial action that Facebook tried to repeat with a new class of non-voting shares of its own, before dropping the idea after protests from shareholders.

Given their disproportionate impact on the overall stock market, the decisions of companies like these about whether to return to stock splits could play an important role in overall market sentiment, said Mr Dover.