Appian’s (APPN) popularity in the market may be in the process of unraveling. The software development platform company, which advertises its capacity to help non-technical business users automate business processes in a “low-code” manner, has just reported Q1 results. Despite a strong beat to Q1 expectations (most of which was due to non-recurring deals, which we’ll discuss in detail later in this article), Appian’s uncertain stance on the impacts of the coronavirus and its decision to eliminate its full-year outlook have cast some weakness on the stock.

Prior to Q1, Appian was vastly outperforming the broader market like many of the remote-work stocks, despite no clear tailwind to sales as we had in companies like Twilio (TWLO), Bandwidth (BAND), and Zoom (ZM). And even after the ~7% drop this quarter, Appian is still up nearly 30% year-to-date, outperforming the S&P 500 by a non-trivial forty points.

In my view, it’s unclear why Appian continues to outperform and trade at a double-digit valuation multiple. There are a number of bearish headwinds against the stock outside of the immediate impact of the coronavirus, including:

Steer clear here, especially with how expensive Appian’s current valuation is given its year-to-date outperformance.

At present share prices just under $50, Appian trades at a market cap of $3.35 billion. After netting out the $149.2 million of cash on Appian’s balance sheet, its resulting enterprise value is $3.20 billion.

Prior to Appian pulling its full-year forecast, it had guided to revenues of $296-$298 million for the year, representing 14% y/y growth. Its forecast for Q2, which it did provide, calls for revenue growth to be negative in Q2. Now, despite weak conditions across many tech companies, very few SaaS companies (especially in the high growth space like Appian) have gone so far as to suggest revenues would decline.

Wall Street estimates per Yahoo Finance, meanwhile, have a wide range of revenue expectations for the current year, ranging from $255.6 million (-2% y/y) to $298.0 million (+14% y/y, the high end of Appian’s original outlook), reflecting the lack of clarity around this company’s growth trajectory. Consensus is calling for $285.6 million, or +10% y/y. Against this revenue view, Appian trades at a steep 11.2x EV/FY20 revenues. Meanwhile, many other SaaS companies that are expected to grow in the low teens and even low 20s have sunk to mid single-digit multiples:

Appian is worth far from a double-digit multiple, especially with the uncertainty surrounding a potential revenue decline. Steer clear here. 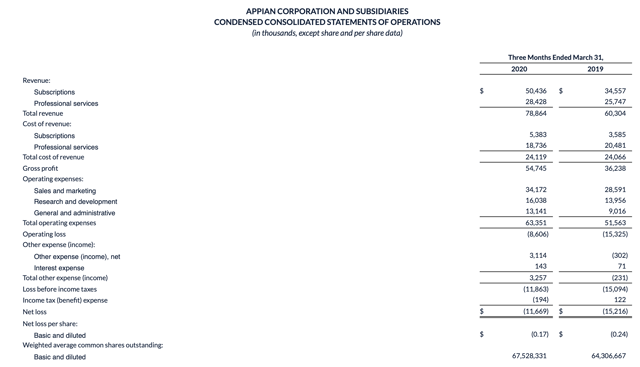 At face value, Appian’s revenue of $78.9 million, or +31% y/y, appeared to hit it out of the park – blasting past Wall Street’s expectations of $70.3 million, or +17% y/y. But several deal timing occurrences in Q1 helped to artificially boost this quarter’s revenue.

Per CEO Matt Calkin’s own description of this circumstance on the Q1 earnings call:

First, we recognized approximately $4 million of on-prem revenue associated with deals that closed in Q1 2020 that we anticipated would not close until Q2 2020 when we provided our initial Q1 guidance. Additionally, we closed a two-year on-prem contract during the quarter, where the customer did not want the contract to auto renew on an annual basis. As a result, we recognized $2.8 million in revenue upfront versus recognizing approximately $1 million each year upon auto renewal.”

As such, Appian recorded about $5.8 million of non-recurring revenue this quarter, $4 million of which would have rolled over into Q2. If we normalize the timing of these deals, Q1 revenue would have been $5.8 million lower and grown at +21% y/y, while Q2 guidance would be $4 million higher at $64.0-$65.0 million – but this still represents a -4% y/y revenue decline in Q2 versus 2Q19 revenue of $66.9 million.

Unlike many other software companies, Appian made no comments on the monthly linearity of its sales performance (most SaaS companies have reported weak March sales, as expected, but also that business more or less resumed as normal beginning in mid-April). Calkins did note, however, that “we’re inevitably going to face some disruption in some predictable ways and some unpredictable. It’s likely that some sales cycles will lengthen and also likely that services revenue will be lower than we previously expected.”

This makes sense because Appian’s app-development platforms represent discretionary IT spending that takes less precedence versus making offices remote-work ready. With most companies cutting capex and IT budgets this year to conserve cash, Appian’s new deal cycles are likely to suffer.

Expansion rates within Appian’s existing customer base, meanwhile, remained at a net upsell, but sank eleven points year-over-year to 115% versus a net retention rate of 126% in the first quarter of last year: 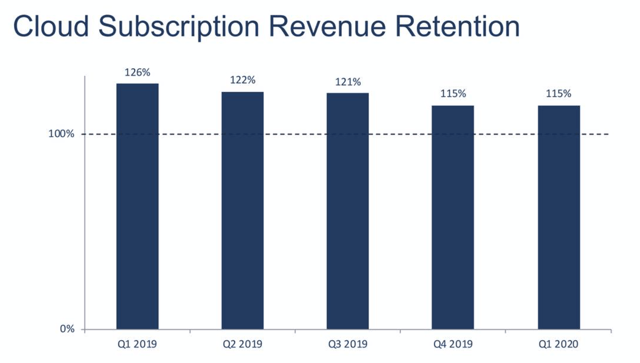 We note as well that Appian’s services revenue remained at a high 36% of overall revenues, dragging down overall gross margins to 69% on a GAAP basis (versus most other software companies in the mid-70s).

The good news is that Appian notched some wins on the profitability front this quarter. Adjusted EBITDA, Appian’s primarily profit measure, saw losses halve from -$7.3 million in the year-ago quarter (a -12.1% margin) to just -$3.6 million this quarter – an approximately eight-point improvement to -4.6% margins. However, a large portion of this margin upside was likely due to the fact that Appian pulled in an unnatural ~$6 million revenue into the quarter, as the company still notched substantial increases in sales/marketing and general and administrative expenses. Unlike many other struggling technology companies, Appian has not yet unveiled any plans to reduce operating costs or headcount this year.

With only ~$150 million of cash left on its balance sheet, Appian could run tight on liquidity. Q1 free cash flow was relatively modest at just -$4 million (but again, this might have been helped by the quarter’s revenue pull-ins). Appian has yet to become cash-flow profitable, and last year, its FCF burn totaled -$41.3 million (though the majority of that burn is due to a headquarters build-out). None of this suggests that Appian will need to raise capital in a hurry, but its cushion is significantly lower than other companies that are trading at double-digit revenue multiples that investors have deemed “safe”.

Many red flags are emerging for Appian, especially as it expects to enter a rare revenue decline in Q2 with little indication of when and how the business will normalize. Appian’s premium valuation multiple is invalidated by its souring growth rates, its high percentage of services revenue pulling down overall gross margins, and the heavy competition in its space. A stock with such weak fundamentals trading at ~11x forward revenues has a lot of air to be let out of its balloon.