A surge in Uber’s food delivery business was unable to counteract a 75 per drop in global ride-sharing, dragging the company’s overall revenues down 29 per cent as it continues to count the cost of the coronavirus crisis.

For the April-June quarter, Uber’s gross bookings — the total value of trips, deliveries and other Uber services — fell 35 per cent from the same period last year, to $10.2bn.

The number of active users of Uber’s services fell by 44 per cent, to 55m.

But locked down Uber customers pushed revenue for the company’s food delivery business, Uber Eats, up by 103 per cent, year-on-year, to $1.2bn.

The impact on its rideshare business was in line with warnings given by the company last month and, despite the drop, the business was still profitable in the quarter, discounting for interest, tax, depreciation and amortisation costs.

Overall, revenues were ahead of Wall Street expectations, although the shares lost ground in after-hours trading, falling about 4 per cent to roughly erase their gain from earlier in the day.

Uber maintained its goal for the company overall to post an ebitda positive quarter at some point in 2021.

“We are fortunate to have both a global footprint and such a natural hedge across our two core segments,” said Dara Khosrowshahi, chief executive, in a statement.

“As some people stay closer to home, more people are ordering from Uber Eats than ever before.” 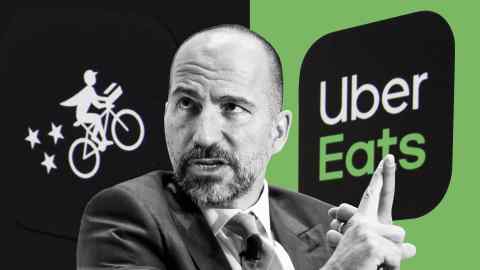 Uber is expanding that business: it agreed last month to acquire rival delivery service Postmates in an all-stock deal worth $2.65bn.

Measures related specifically to Covid-19, such as payments for some affected drivers, totalled $48m in the quarter, Uber said.

The company is awaiting the ruling of a California judge on whether or not to issue an injunction intended to force the company — and its rival, Lyft — to provide some employment benefits to workers. A hearing is being held on Thursday.