Apollo Global Management: For When Blood Runs The Street (NYSE:APO)

Apollo Global Management (APO) was one of the big winners in the wake of the Global Financial Crisis. Since then, the company has gone public and delivered for its shareholders. When the markets are in disarray, Apollo Global Management is at its best. Especially when everyone is looking for credit. The current crisis is Apollo’s natural habitat, and they are on the prowl. With the stock trading at about 10% of its highs, it’s a clear buy.

Before looking deeper into the business, let’s see how Morningstar sums up Apollo:

Apollo Global Management Inc is an alternative investment manager. It serves various sectors such as chemicals, manufacturing and industrial, natural resources, consumer and retail, consumer services, business services, financial services, leisure, and media and telecom and technology. The company operates in three business segments that are Private Equity, Credit, and Real Assets. It generates maximum revenue from the Credit segment in the form of fees. The credit segment primarily invests in non-control corporate and structured debt instruments including performing, stressed and distressed instruments across the capital structure. It also includes Corporate Credit; Structured Credit; Direct Origination and Advisory and Other.

As stated above, Apollo generates most of its fees from credit and in this space, Apollo is top tier. So, when the credit markets went into a tailspin at the end of February, early March, this brought plenty of opportunities. Personally, I’m not an expert at distressed securities or debt instruments, but I wanted to profit from this havoc. So, a short list of excellent asset managers came to mind: GSO of Blackstone (BX), Oaktree with Howard Marks (now majority owned by Brookfield Asset Management (BAM) and Apollo Global Management, founded by Leon Black. Prior to the crisis, Bloomberg did a piece on Leon Black, and I think it does a great job at describing the money-making skills the man and his company possess.

For Apollo, and for every other investment manager, assets under management (AUM) is what counts. The business is making money with other people’s money (OPM). Apollo has been highly successful at growing its AUM:

Since AUM is OPM, the composition of it is very important. If client assets are being held in open-ended structures such as ETFs or mutual funds, it’s easy for investors to pull their investments. The nature of alternative investment is that funds are locked in longer, and most of the investors are in it for the long term, think pension funds, endowments and family offices. So, when a fund is raised, the AUM from it will be with the firm for many years. For a manager, its fundraising ability says something about future earnings. During these volatile times, Apollo managed to seek commitments and launch new funds for credit and infrastructure.

Even better than long-term capital is permanent capital. This can constitute closed-end funds such as REITs and BDCs, but can also be what Warren Buffett calls float from an insurance company. To be less dependent on the whims of investors, Apollo has been focusing on obtaining permanent capital and has been very successful in doing so: 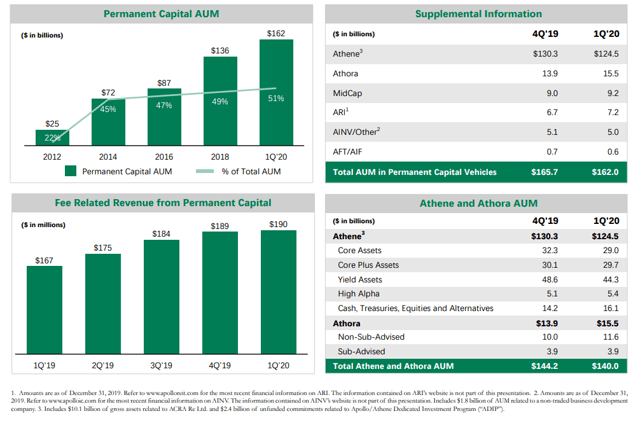 As of the end of Q1 2020, permanent capital amounts to 51% of total AUM for Apollo. Athora, a reinsurance company, and MidCap Financial, a midmarket lender, are private. The others are public and can be an additional way to invest alongside Apollo. Athene (ATH) is an insurance company in which Apollo holds 34%. The other two worth mentioning are Apollo Commercial Real Estate Finance (ARI), a REIT, and Apollo Investment (AINV), a BDC.

Before looking into the financials, let’s see how an investment in APO did since its IPO, do note that the company only changed to a regular c-corp in September of last year:

During this time, the company also paid out a decent amount in dividends: 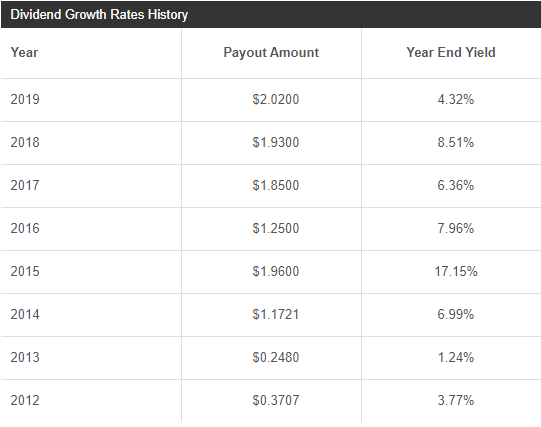 Normally, income statements, balance sheets, and cash flow statements do a pretty good job in describing how a company is performing. Not so much so for alternative investment managers, however. Especially when the firm in question just recently converted into a c-corp from a publicly traded partnership. A quick look at the balance sheet before going back to the AUM does give some insight: 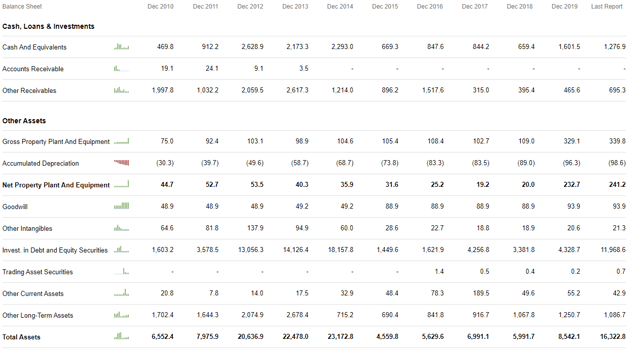 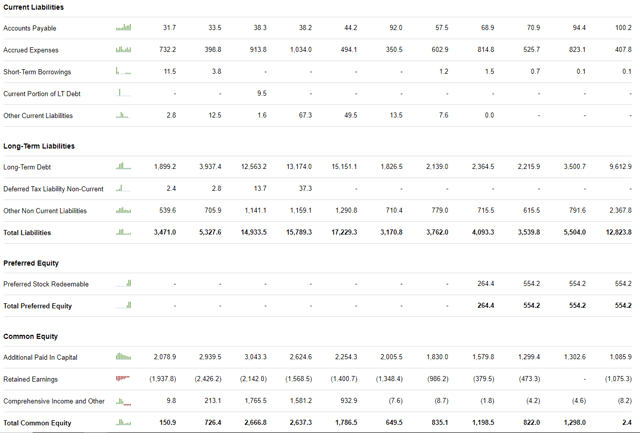 Looking at the assets, they consist mainly of cash and other liquids, investment in debt and equity securities and ‘other long-term assets’. The last are also mostly investments, but can be categorized as level 3 assets. So, in essence, the asset side is just a portfolio. The liability side makes clear that it’s a leveraged one at that. This shouldn’t be a surprise, since it’s Apollo’s bread-and-butter. The debt used has been throughout the years several times larger than the total equity, but this shouldn’t be a problem. First, the payouts to (former) employees of Apollo have clawback provisions, as mentioned in the latest earnings report. This can recapitalize the balance sheets quite easily. The second reason why this isn’t a problem is because of the permanent capital vehicles. These can also be used for buy-ins, if needed.

Looking at the earnings for the last quarter, they were down quite a bit compared to last year. The reason is pretty clear. While the normal fees were higher than last year, the performance fees caused pain for the overall earnings. Given the market turmoil this was to be expected. But more important than the earnings this last quarter is to see how AUM developed. 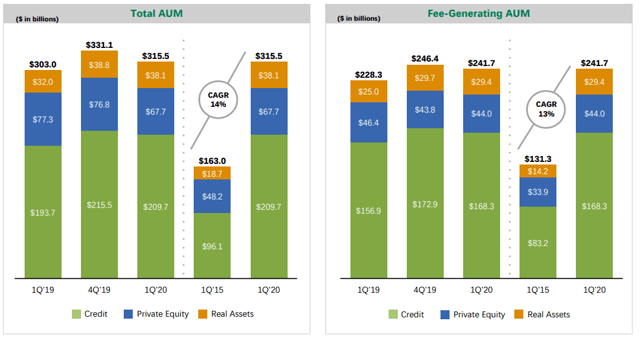 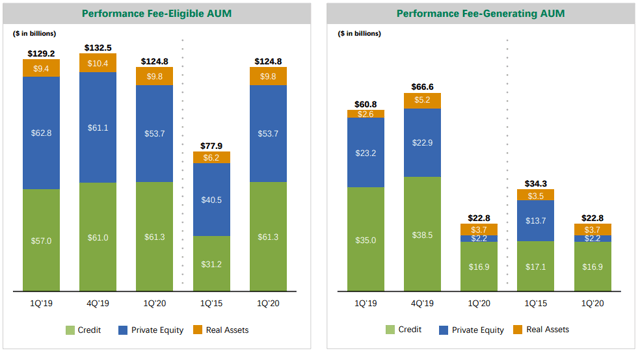 Overall, the AUM dropped slightly, but the drop in performance fee-generating AUM is significant. However, do remember that the markets bottomed out just a week before the end of Q1 and have rebounded significantly, so far. If the markets progress as they have since the start of the quarter, expect earnings to bounce back. Especially if they exceed hurdle rates for the performance fee-generating AUM.

The case for Apollo

‘Be fearful when others are greedy and greedy when others are fearful.’ This mantra from Warren Buffett is surely applicable for Apollo. Prior to COVID, Apollo was stocking up on dry powder: 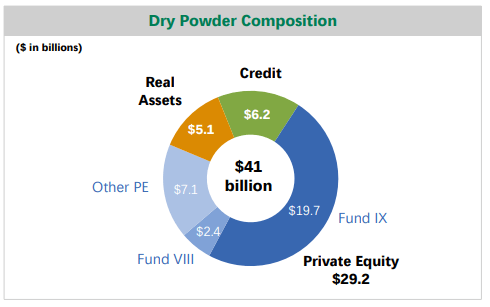 However, when markets got scared, Apollo got to work. It found its shares underappreciated and so upped on buyback. We all know that buybacks give the most value when shares are down, yet many companies suspended them. They bought back their own portfolio companies’ debt at a discount and started pursuing hundreds of deals. They provided debt to United Airlines (UAL), invested in Albertsons (ACI)(who will likely list later this year) and bought into Expedia (EXPE), for example.

And like I said earlier, they also raised extra funds to do some more. So simply put, when there is trouble, there is opportunity, and Apollo is ready to profit from it. These investments might not all work out or do so in the next quarter or so. But in a longer time frame, an investment in Apollo will most likely result in profiting from the current pandemic.

READ ALSO  The wealthy are investing like market bubble is here, or at least near

In my opinion, there are three main risks when it comes down to investing in Apollo. The first one is if the AUM stays stagnant or drops. This will erode the business and in turn hurt an investment in Apollo. Since most investors in Apollo’s funds are pension funds, endowments and family offices, they mostly need a certain return. So, if interest rates were to rise, they could start moving their allocation to other asset classes. In effect, an inverse effect of what happened the last few decades, caused by dropping rates. This first risk is highly linked to the second. Mainly if Apollo makes bad investments and/or if rising rates start hurting return. So far, Apollo has an excellent track record, but looking in the rear-view mirror doesn’t predict a bright future. Again, a rise in rates would. For example, make LBOs more difficult to do and with less leverage, returns would shrink.

The final risk I want to single out is the fact that PE firms are not that well liked by a large number of politicians. Or the general public for that matter. This could result in future increases in taxation or not being eligible for bailouts. So far, lobbyists have been able to shield the sector from such events, but it might very well be that in the future this will happen.

Apollo Global Management is one of the savviest investment companies out there. It has kept growing since the GFC. With Leon Black at the helm, you’re investing with a true shark. When blood ran the streets this spring, Apollo pounced on several targets. They have been aggressive and are raising funds to do some more. Even so, it’s not without risks. But at the current price, it’s a setup to profit from the current situation. Apollo Global Management is a buy.

Disclosure: I am/we are long APO, BX, BAM. I wrote this article myself, and it expresses my own opinions. I am not receiving compensation for it (other than from Seeking Alpha). I have no business relationship with any company whose stock is mentioned in this article.