Antero Resources (NYSE:AR) has long had some very unconventional ways to make money in this business. Wall Street has long valued continuing operations as the main source for valuing the stock. A bunch of “one time” or “non-repeating” items never made the radar of Mr. Market. Mr. Market has always assumed that “one time” items do not repeat and therefore should not be valued much if at all in the stock price. However, this management persists in making money the way Frank Sinatra sang about it (“My Way”). That is good news for this stock and also for holders of the captive midstream, Antero Midstream (NYSE:AM).

Mr. Market may not value that unconventional income much. But that income has done wonders for the finances and the safety of this out-of-favor investment.

Mr. Market has long worried about the ability of Antero Resources to refinance maturing debt due in 2021 and 2022. This worry has persisted despite the fact that those dates are an “eternity” away from the current situation. By now most readers should realize that the oil and gas business can change materially “on a dime” without a lot of warning.

In a normal situation, debt due should be resolved about two years ahead of time. That means, that either refinancing or selling assets to repay the debt is now running on a tight schedule if times were normal. But the coronavirus challenges are far from normal as well as very unpredictable. Therefore some scheduling tightness (for refinancing) should be expected by Mr. Market and just about any potential investor. 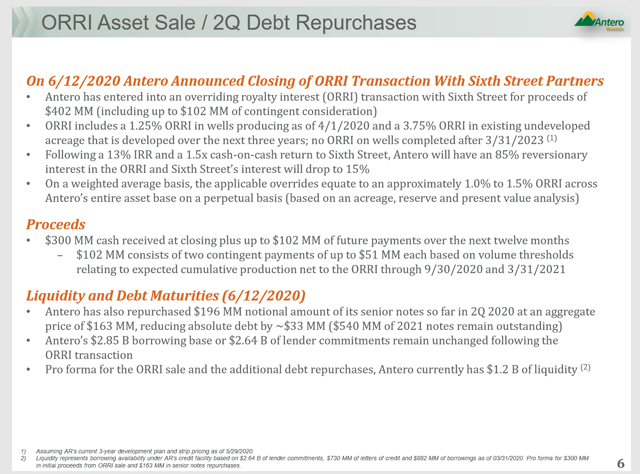 The company reported a cash influx of $300 million. When combined with the earlier sale of some Antero Midstream shares, this company is now at least halfway to raising the amount of cash that management set as a goal originally.

If investors feared that the banks would stop the bond repurchases, then this latest announcement should set those fears aside. The discount to face value of bonds purchased by the company were “only” 17% in the second quarter. A financially sound company like Antero Resources can make money “hand over fist” as long as Mr. Market remains stubborn.

The immediate $300 million received paid down the revolver, so the process could continue comfortably. Management has even purchased some of the debt further out during the fiscal year for a bigger discount to face value. Normally the ratings agencies are less than thrilled when these types of profits happen. But there is nothing to financially indicate that Antero Resources has any type of financial distress other than the opinion of Mr. Market.

The liquidity picture through the end of fiscal year 2021 has improved nicely as shown below. The company has also reduced the amount of 2022 bonds outstanding. The current remaining balance of bonds easily fits on the remaining bank credit line. 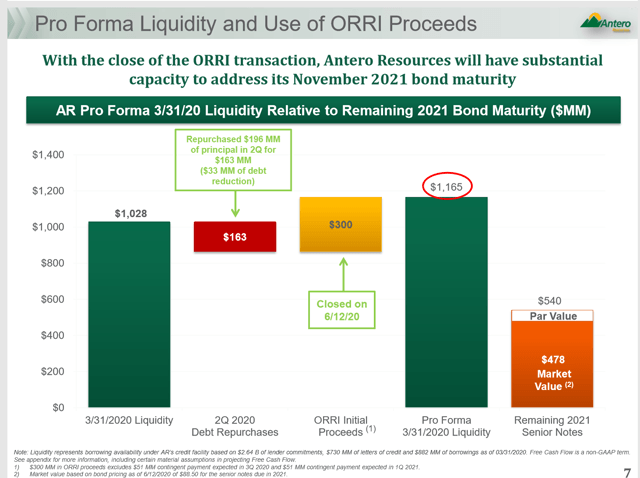 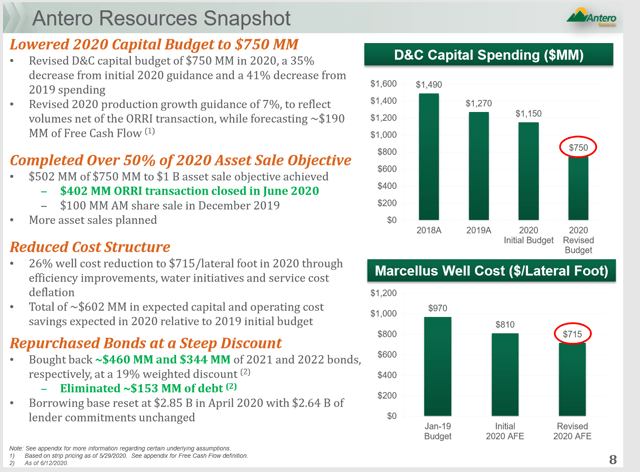 Every time this company purchases bonds at a discount, not only does it save the interest that would have been paid, but also the money incurs interest at a far lower rate on the revolving bank line. Of course, there is also savings on the principal through the purchase of the bonds at a discount to face value. This program appears to be easily earning 20% (or more) on the money used.

Interestingly, fears still persist that management cannot refinance the debt due despite the fact that the debt due in the next fiscal year is now very manageable for the company. In fact nearly all the debt due over the next two years can now fit on the bank line with room to spare under current market conditions. That could change once the market comes to its senses. In the meantime, this company is paying its debt before it becomes due while making money from the process.

The liability of the new overriding royalty interest is in effect half paid for from the savings gained from repurchasing the bonds at a discount. The company does pay for the royalty with tax deductible dollars. Therefore the cost increase caused by the overriding royalty is being mitigated not only through operational improvements but also debt interest savings, the tax deductions available, and debt principal discounts.

The Marcellus is generally a low-cost basin when it comes to looking at taxes. For example, Pennsylvania (next door to a lot of the company production) has no severance tax. There are other fees of course as well as an income tax. But the general tax structure in neighboring West Virginia (the heart of the Antero operations) needs to remain competitive with a state like Pennsylvania. That is going to keep the amount paid to the state for various reasons relatively low.

Texas, on the other hand, funds much of its budget through oil and gas revenues. Texas also has a fairly high value product in that much of the production in the state hinges on the price of oil. That favorable “no income tax” for voters has to be compensated for somewhere else. Basically the oil industry fills in the gap to enable no income tax.

When it comes to dry gas production or even rich gas production, the Marcellus appears to be located in a very tax-friendly area.

That situation gives Antero Resources room to pay for an overriding royalty that a company located elsewhere may not have. Right now the tax structure appears to be favorable enough to allow an overriding royalty without a significant competitive disadvantage. But that is definitely my opinion as taxes, corporate income taxes, and fees are the subject of a lot of debate both within and outside the industry. That situation could change in the future very quickly though. Therefore the company was very wise to limit the bulk of the payments to about three years.

Operating levels throughout the industry have literally “fallen through the floor”. 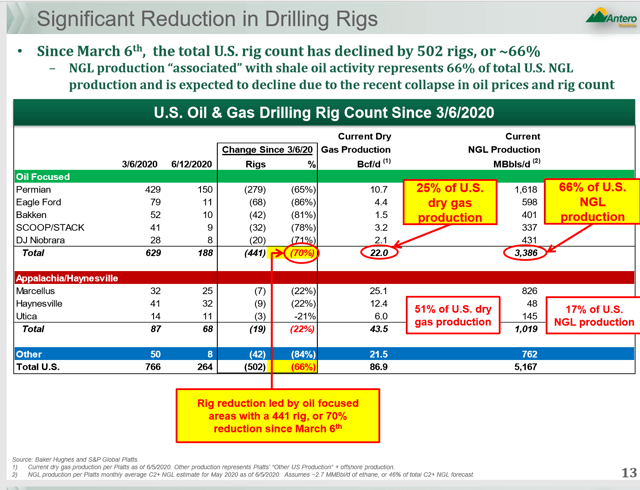 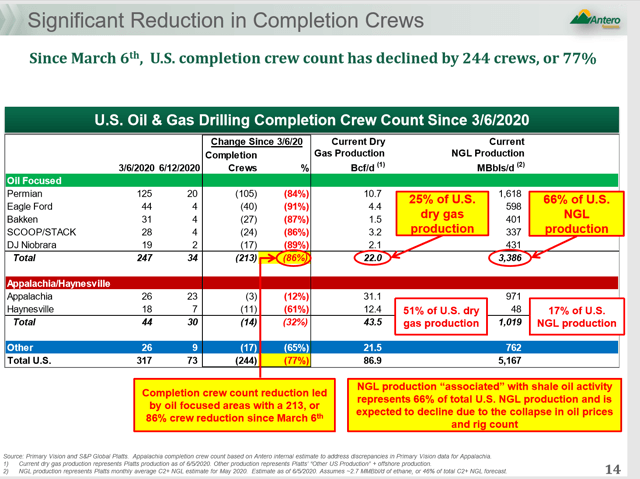 The numbers shown above are far lower than even the most optimistic projection of a year ago. It is a quick demonstration as to how fast industry conditions change. For the time being, the lack of activity is favorable for natural gas pricing in the future. Demand is now in the process of recovering. There is some storage of product that needs to be dealt with. But until some balance sheets get repaired, this company may be in the “catbird seat”.

Activity levels can quickly change in the unconventional business. Therefore anything longer than six months is often subject to material changes. Sometimes even six months is a stretch. But right now this company appears to have about as favorable a future as a company can have in this industry.

Finances are not a problem. The company has hedges worth about $1 billion plus another $700 million (give or take) of Antero Midstream stock. That is a lot of near cash assets to have before considering the bank lines. Furthermore this company has a history of selling both hedges and Antero Midstream stock for cash in the past. Many companies do not touch their hedges until it is settlement time.

This company has made billions from its hedges. Banks will notice a consistently profitable hedging program even if Mr. Market does not. Banks will also notice the periodic premature hedge liquidations that occur here. Similarly the opportunistic hedging program has added billions to revenue since the company went public. But it is also an additional investment risk factor.

Despite a lot of market doubts, management is now halfway towards its goal to raise roughly $1 billion to deal with the maturing debt. More importantly, nearly half of the debt coming due over the next two years has now been purchased at a discount. For as long as I have followed this company, management has been fairly creative at making profits. That appears likely to continue in the future.

The company has also squeezed $3 million out of well costs while saving some administrative costs as well.

Even though a fair amount of value was created through the creation and growth of the midstream company as well as the hedging program, both still count as non-recurring profits at the end of the business day. Neither really factors in the value of the stock price as Mr. Market wants operating profits.

Operations have been hampered by a very long decline of natural gas prices. This is what Mr. Market cares about. But those other profits have boosted finances while several competitors are struggling. That decline may have finally ended. Next we will find out how high natural gas prices go and how long that ascension takes before the next cyclical downturn.

In the meantime, Antero Resources remains one extremely undervalued company.

I analyze oil and gas companies like Antero Resources and related companies in my service, Oil & Gas Value Research, where I look for undervalued names in the oil and gas space. I break down everything you need to know about these companies – the balance sheet, competitive position and development prospects. This article is an example of what I do. But for Oil & Gas Value Research members, they get it first and they get analysis on some companies that is not published on the free site. Interested? Sign up here for a free two-week trial.

Disclosure: I am/we are long AR, AM. I wrote this article myself, and it expresses my own opinions. I am not receiving compensation for it (other than from Seeking Alpha). I have no business relationship with any company whose stock is mentioned in this article.

Additional disclosure: Disclaimer: I am not an investment advisor, and this article is not meant to be a recommendation of the purchase or sale of stock. Investors are advised to review all company documents, and press releases to see if the company fits their own investment qualifications.