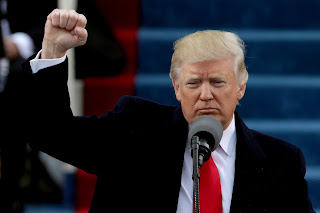 President Trump has again attacked the Federal Reserve, labeling it the “most difficult problem” the U.S. faces.

“Strong jobs report, low inflation, and other countries around the world doing anything possible to take advantage of the United States, knowing that our Federal Reserve doesn’t have a clue!” Trump tweeted late Friday night. “They raised rates too soon, too often, & tightened, while others did just the opposite.”

“As well as we are  doing from the day after the great Election, when the Market shot right up, it could have been even better – massive additional wealth would have been created, & used very well,” he continued. “Our most difficult problem is not our competitors, it is the Federal Reserve!”

He continued his attacks on the Fed on Sunday.

If the Fed “knew what it was doing” it would cut rates, Trump told reporters before he boarded Air Force One in Morristown, New Jersey, to return to Washington after a weekend at his nearby golf club.

There is some speculation that he might, after confirmation by the Senate, name one of his two nominees to the Fed board, Judy Shelton or Christopher Waller, as Fed chair, pushing aside current chair Jay Powell.

Either may be in line for the Fed’s top job once Powell’s term as chairman expires or even before, according to a person familiar with the matter.

Waller is an all-out money printing dove and, as I have pointed out, Shelton is very erratic in her positions but seems at this time to be in favor of very strong money printing.

Trump has told aides that he believes he has the power to relive Powell of his chairmanship and name a replacement from sitting governors.