Annexon (ANNX) has filed to raise $100 million in an IPO of its common stock, according to an S-1 registration statement.

The company is a clinical stage biopharma developing antibodies for treating autoimmune and neurodegenerative diseases.

ANNX is targeting a number of sub-$1 billion markets with a single candidate, ANX005.

When we learn more about the IPO’s pricing assumptions, I’ll provide a final opinion.

South San Francisco, California-based Annexon was founded to advance a pipeline of antibody treatments for diseases such as Guillain-Barre Syndrome [GBS] and Huntington’s Disease.

Management is headed by president and Chief Executive Officer Douglas Love, Esq., who has been with the firm since 2014 and was previously Head of Operations and Strategic Alliances at Elan Pharmaceuticals where he led the multiple sclerosis franchise.

Below is a brief overview video of Guillain-Barre Syndrome:

The firm’s lead candidate, ANX005, is a monoclonal antibody being tested against GBS and Warm Autoimmune Hemolytic Anemia as well as Huntington’s Disease and Amyotrophic Lateral Sclerosis.

Below is the current status of the company’s drug development pipeline:

According to a 2018 market research report by Transparency Market Research, the global market for GBS treatment was valued at $454 million 2016 and is expected to reach $709 million by 2025.

Key elements driving this expected growth are a growing incidence of the disease, rising rate of diagnosis in developing countries and the increasing usage of off-label treatment options.

Major competitive vendors that provide or are developing treatments include:

Annexon’s recent financial results are typical of an IPO stage biopharma in that they show no revenue and substantial R&D and G&A expenses associated with advancing its pipeline through trials.

Below are the company’s financial results for the past two and ¼ years (Audited PCAOB for full years): 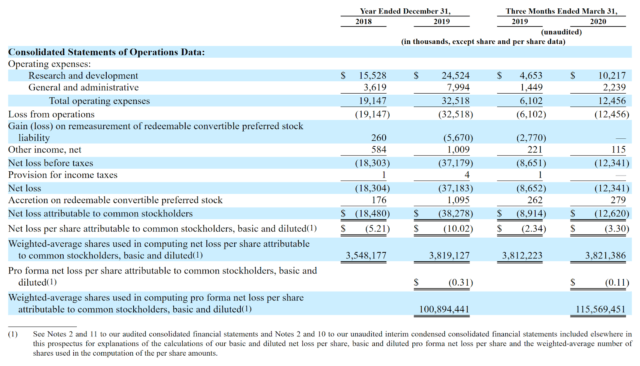 Annexon intends to raise $100 million in gross proceeds from an IPO of its common stock, although the final amount may be different.

No existing shareholders have indicated an interest to purchase shares at the IPO price, although this element may become a feature of the IPO if disclosed in a future filing.

Management says it will use the net proceeds from the IPO as follows:

to advance ANX005 for the treatment of Guillain-Barré Syndrome, or GBS, and warm autoimmune hemolytic anemia, or wAIHA;

to advance ANX005 for the treatment of Huntington’s disease, or HD, and amyotrophic lateral sclerosis, or ALS;

to advance ANX007 for the treatment of geographic atrophy, or GA;

to advance our earlier-stage programs, including ANX009, and our next generation product candidates, including ANX105 and small molecule modulators of the classical pathway;

to fund our other research and development activities; and

the remainder for working capital and other general corporate purposes.

Management’s presentation of the company roadshow is not available.

Listed bookrunners of the IPO are J.P. Morgan, BofA Securities and Cowen.

Annexon is seeking a now typical IPO placeholder of $100 million to advance its various programs through or into trials.

The firm’s lead program, for the treatment of Guillain-Barre syndrome, is in Phase 2 safety trials with the next data readout not expected until early 2023 in a best-case scenario.

The market opportunities for the various conditions the firm is seeking to treat are variously on the small side, under $1 billion in several categories.

Management has disclosed no research or commercial collaborations, although the firm counts major pharma firm Novartis among its investor syndicate, a positive signal.

None of the firm’s major targeted markets appears to be large; rather it is seeking to repurpose a single treatment for various related conditions.

I’ll provide a final opinion when we learn more about the IPO from management.

Members of IPO Edge get the latest IPO research, news, and industry analysis. Get started with a free trial!