I looks as if I might disagree with Paul Krugman for barely more than once. I admit I am following Brad DeLong (and also that I surfed there from Kevin Drum).

The discussion is over what hurt blue collar US workers, automation, China or two recessions.

Yang says it is automation. Krugman disagrees in a tweet thread noting that productivity growth has been slow (I do absolutely agree with Krugman that Twitter is horrible and that blogs are better).

I will fair use with abandon

OK, it seems mean to pick on Andrew Yang, who won’t even be a factor in the nomination. But he positions himself as the tech guy who knows how the world really works, and there are others like him. So maybe worth pointing out that they’re all wrong 1/

Yang’s thing is that automation is destroying all the jobs, so we need universal basic income. There is a case for UBI (and a case against, in favor of more targeted aid), but either way the premise is wrong. Productivity has been slowing down, not speeding up 2/ 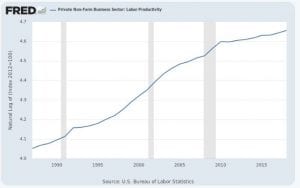 Here we have Yang focused on manufacturing and Krugman on the whole economy. Total labor productivity has a lot to do with where people are working and poorly measured production of health care (and education) matters a lot. However, the post great recession slowdowns are similar 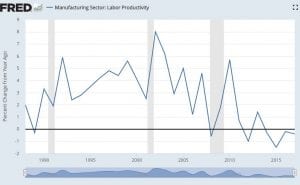 The troubles of the very troubling past decade are not due to rampant revolutionary robots.

Krugman argues against Yang (and 1990s Krugman) that trade was very important. But there is an odd shift in time frames. The productivity slowdown noted in tweet 2 is post 2008, the next tweet discusses 2000-2005

And while Yang asserts that automation destroyed lots of manufacturing in the midwest, you don’t have to be a protectionist to realize that the acceleration of job loss after 2000 was mainly about the surging trade deficit 3/ 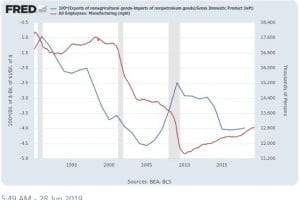 By the way, Brad also has the very smart (as usual) point that blue collar jobs include transportation, construction, and mining (and really wholesale trade) and import competition specifically affects manufacturing (just click the link).

Largely Krugman is assuming his twitter followers understand the effects of the business cycle with high demand causing high employment and large trade deficits and recessions causing reduced employment and trade deficits. He looks at the graph and takes out the dot.com boom, the mini recession, the housing boom and the great recession. Brad and Drum take him to task for this, saying the main problem is aggregate demand. I don’t think Krugman really disagrees with that at all. He just assumes that anyone who looks at his second figure sees dramatic decline in manufacturing employment and increasing trade deficits 2000-2018 somewhat obscured by the business cycle.

But Krugman does have trouble with his little graph. First, since 2007, the non oil non agricultural merchandise trade deficit hasn’t surged. It went from 4% if GDP to 4% of GDP. “after 2000” must mean “fairly soon after 2000 but, by now, a long time ago”. Second, the productivity slowdown (noted in tweet 2) is totally after the deficit surge ended — from 2007 to now. In the years soon after 2000, there were two anomalies (much discussed by one Paul Krugman) a recovery with actually declining employment (job loss recovery after the jobless recovery and before the job lust recovery and I fear to think of the alphabetically following Job Lys tears recovery). The second was the extremely high growth of productivity in a fairly slack economy. Those years fit Yang’s story, about automation.

Then there are the great recession and the sluggish recovery. The US has seen stable non oil non agg. merchandise trade deficits, slow productivity growth (also in manufacturing) and an overall decline of manufacturing employment (of about 12%). That sure looks like a period of slack demand and extraordinarily slow growth for a US decade. Since 2007 US GDP detached from the exponential trend it had followed for a century (actually rather more than the shortfall 1929-1941, but I think even more 2007-2017 than 1929-1939). That is, as Kevin and Brad note (and as Krugman has noted again and again) clearly a matter of horrible macro policy (much less horrible than over here).

I’d say overall, the trade and manufacturing employment evidence is pretty weak. The China shock had dramatic effects on some factory towns, but it doesn’t show up very clearly in national data. Something very strange was happening 2000-2005. I didn’t understand it then and I don’t understand it now. Then from 2007 through 2016 (maybe) there was very slack demand largely due to low housing investment and low government investment. It doesn’t seem to have had all that much to do with robots, Chinese people, or even Chinese robots.