Angry Bear » Destroying Social Security to Save It

Connecticut Representative John Larson Proposes Plan To Destroy Social Security In Order To Save It, by Dale Coberly 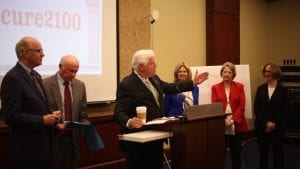 It sounds good, but of course he wants it to sound good. In the past we have had to be worried mostly about plans from the “Right,” the crazy people who want to Save Social Security in order to destroy it. Their plans sounded good, too.

To make it easier on myself, I am going to just list Larson’s points and offer a few words about them in the hope you will think twice.

There is a benefit bump for current and new beneficiaries — Provides an increase of 2%.

Me: A 2% increase in benefits would mean nothing to beneficiaries. Unlike the reduced inflation indexing the bad guys were proposing, this increase will not accumulate over time.

What Social Security faces is a potential 20% cut in benefits if the payroll tax is not increased to keep up with increases in life expectancy. The increase needed would be about 2% of payroll. 2% of payroll becomes 20% of benefits because the 2% you pay is matched by 2% your employer pays for. That extra 4% over 40 years of working becomes 8% over 20 years of life expectancy, and that 8% becomes roughly 20% due to the effective interest that arises automatically from pay as you go financing.

Me: Probably a good idea. But the “normal” inflation adjustment, if paid for by that 2% increase in the payroll tax, will provide increased benefits that may be adequate. The question is how are we going to pay for a higher COLA? My suggestion is that a tiny bit larger increase in the payroll tax would not be felt, and would avoid the politically suicidal “make the rich pay” part of Larson’s plan unnecessary.

Larson: Protect low income workers. A new minimum benefit will be set at 25% above the poverty line.

Me: Again, probably a good idea. But not if it changes the “worker paid” feature which is so important to Social Security’s political future.

If the workers want to pay more for a higher benefit dedicated to those who paid for the insurance against ending among the poorest, then that’s fine. It’s not so fine if the increase is paid for by “the rich,” because the rich will not pay for it. And it’s not so fine if it becomes subject to increased hiding of income to free-ride on others paying the tax. Not to mention the costs of managing the means testing that this implies.

Me: Social Security is supposed to be insurance against ending up poor. Currently no one pays taxes on their Social Security income unless they have other income over $25.000 per year. Combined with their SS income this would suggest an income in retirement of about $45,000. This is not poverty.

There are other ways to jiggle around the SS ‘break points” or taxing of benefits. The tax on part of SS income for those with enough other income to stay out of poverty turns out to be the simplest and fairest. Might be important to remember that SS is not only “what you paid in,” but is about double what you paid in because of the effective interest of pay as you go.

You pay taxes on gains from every other investment. So there is nothing immoral or counterproductive about taxing part of SS benefits for those who otherwise have sufficient income. This tax is returned to the Social Security trust fund and is part of what helps pay those increased benefits for the poor.

Have millionaires pay the same rate as everyone else.

Me: This is the bit that destroys Social Security. Currently millionaires pay the same rate as everyone else: 12.4% of the first $130 thousand per year. This is enough for them to pay for what they get from Social Security… an effective real interest of around 1 or 2 percent, plus the insurance value in case their millions of dollars disappear before they retire, or when they become disabled or die leaving dependents.

They only get that 1 or 2% compared to your 2 or 3% and the poorest up to 10% or more because the money they would get if everyone got paid the same interest is what enables SS to pay the bigger “interest” needed to pay for basic needs of the poorest.

“Making” them pay 12% on ALL of their income would be a huge tax increase they would get nothing out of. They would fight it forever.

It would be like having a cop watch the check-out line at the grocery and demanding every customer show their tax returns and “making” anyone with “too much” income pay for the groceries of the next ten people in line.

This sounds fair to some people who think that the “rich” stole their money from the “poor.”
Maybe some did, but this is not the way to fix that problem. If you want to tax the rich more, fine. If you want more welfare, fine. But don’t do it to Social Security, which works, and has worked for eighty years exactly because it is NOT welfare. NOT “soak the rich.”

Larson: 50 cent per week to keep the system solvent. Gradually phase in an increase in the tax by an average of 50 cents per week.

Me: Sounds familiar. Question is why stop at 50 cents when a dollar will keep the system solvent forever without the political dangers of “make the rich pay”?

Do we think an extra 50 cents per week out of an income of 50k per year is going to be felt? Note that for the poorest people making 20K per year, the “dollar per week” turns out to be 20 cents per week (The increase needed to keep SS solvent forever is one tenth of one percent of income per year.)

This is mindless greed. Greed so stupid it defeats itself.