An Analysis Of Dropbox And Box For The Work-From-Home Era (NYSE:BOX)

The recent virus outbreak has led to an increase in home working arrangements for companies globally and this has boosted demand for collaboration tools. This article discusses the implications for Box, Inc. (NYSE:BOX) and Dropbox, Inc. (NASDAQ:DBX), and discusses their investment attributes.

Box revenues are growing but growth is slowing 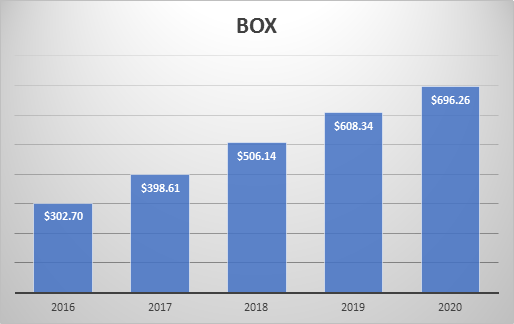 Box revenues have continued to rise over the last five years to $696 million. The company currently books a loss on those revenues of -$0.98 per share. 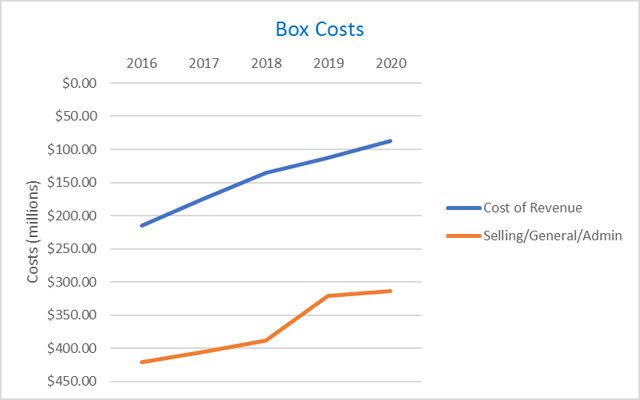 The problem for BOX is a slowing growth rate in annual sales, which is fighting with these other costs. Although revenues are increasing for the company, the growth rate of those revenues is steadily declining. 31% in 2017, to 20% in 2019 and 14.4% in 2020. This has created an average growth rate of 23%, but the overall trend is still in decline.

The average growth rate in cost of revenue is 25%, whilst in Selling/General/Admin it is 7.8%.

If we extrapolate the current revenues at 15%, we get the following EBIT results:

R&D costs have grown to $199 million in the fiscal year, so if the company wants to continue with current trends, then it needs to charge up its sales or the company will still struggle to make a profit in 2024.

If BOX can get annual sales growth up to 20% then it could maybe see profit around 2022/3 at current R&D spend levels, but we also have to factor in interest and taxes.

R&D could improve the current offering

So, Box will need to see a boost in sales and one opportunity could be through its increasing R&D efforts.

A recent press release from the company introduced new experiences to the platform with Collections, Annotations and enhanced integration with the Zoom video platform.

Collections is aimed at organizing files and folders and Annotations is a means to provide mark-ups and texts to content; so both of these are not ground-breaking updates and are more window-dressing.

One area where the company may see enhanced growth is through File Request and its integration into the Zoom platform. The company describes File Request as a, “safe and secure way to receive files and metadata from collaborators outside an organization or without a Box account.” This is a standard for the sector but it will bring new awareness to the existence of the platform.

The company has shared data on its experience with the recent work from home arrangements, which the company boldly describes as, “The Future of Work.” This is a hopeful claim because the work-from-home agenda was forced on companies and many will revert back to their original habits, but at least the technology does now exist for companies to implement more flexible working and outside collaboration if they wish.

By integrating into the Zoom platform, this will allow the company to piggyback on Zoom’s recent user growth with collaboration tools and at least ensure a bounce in sales for coming quarters. 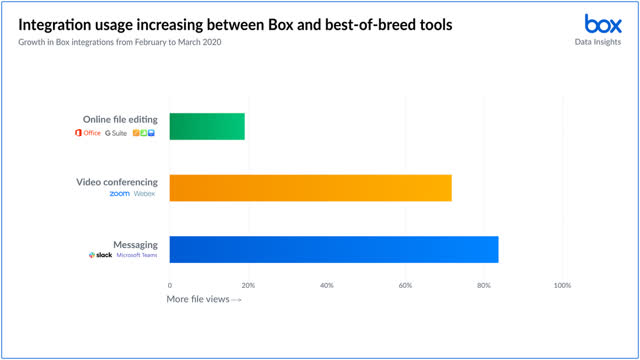 The company is also pushing strong integration with Slack (NYSE:WORK) and Microsoft Teams (NASDAQ:MSFT), with the latter also having video conferencing abilities.

Quarterly earnings give hope there are still near-term headwinds

Recent fourth-quarter earnings showed a 12% Y-o-Y growth and this gives some hope that the company can get back towards the 20% revenue growth level when the lockdown boost translates to the income statement.

Another headwind for the company is in debt levels, where long-term debt to equity is currently 5.5x and this will be an obstacle when the company finally gets to profitability. As the company expands, it is seeing increases in property, plant & equipment costs.

Despite this, BOX is currently selling at 3.6x sales, so at a 15% growth in earnings, then enterprise value could still double by 2025. This could improve further by achieving a more generous P/S ratio.

Dropbox still holds market share and could be a takeover target

Another company in this space is Dropbox which boasts more than 600 million registered users across 180 countries. Dropbox currently trades at a similar valuation to Box with a forward P/E of 24x, but with a higher price-to-sales of almost 5x. Dropbox had positive free cash flow in the recent quarter of $25 million.

The company also has the benefit of a much lower long-term debt of 0.18x. Q-o-Q sales in Dropbox were also higher at 18%. In this sense, Dropbox seems to be the under-appreciated stock in this sector.

The company is seeing revenues grow at an average of 29% per year, which is higher than its rival, but there is still a decline from 30% to 19% last year. At current growth rates, the EBIT in Dropbox shows healthy growth potential to around 4x its current level.

Dropbox turned its operating margins around in 2019, which are now close to positive, and this gives the company an edge in the near term, with Box still at -20%.

With the move towards home working and collaborative working tools, we saw Facebook (NASDAQ:FB) and Google (NASDAQ:GOOG) (NASDAQ:GOOGL) step up their moves in the video room space to tackle Zoom and it’s possible that Dropbox could find itself a takeover target.

A company such as Salesforce (CRM), which has a $154bn market cap, compared to the $8bn of Dropbox, could see the business as a viable addition to its current Salesforce Files collaboration suite. Salesforce trades at 9x sales, so it would be an opportunity to take advantage of a healthy valuation when markets may still see volatility. The cause of another stock drop in the near term would likely be another virus spike and the collaboration tools space would be a beneficiary once again.

Dropbox is now a profitable, and growing business, whilst it has 600 million users that Salesforce could tap into for its existing products. At current growth levels, Dropbox could see an Enterprise Value almost 3x where it is just now.

At current prices, there is still room for both of these companies to grow and the move to home working, although temporary, will have some lasting benefit to sales in this arena. The final word will come down to the quarterly revenues because Dropbox currently has an edge in earnings growth and is better positioned financially to take advantage. For Box, the popularity of Zoom could be the game-changer it needs in sales but I would want to see it deliver this beyond the lockdowns.

At present, I would be long Dropbox as I see it having the best potential for near-term returns. The company has a growing business, with a smaller debt load than its rival and the current market cap could make it a takeover target. The recent lockdowns have brought the attention of the big technology companies to the sector and many will be devising strategies on how to tap into a new way of working that could become more common. Another return of the virus in the fall/winter could propel both companies closer to my EBIT estimations, but at present, Dropbox has the cash flow edge to capitalize.

I am now providing a larger selection of ideas exclusively to Seeking Alpha readers through my own Marketplace service. Global Markets Playbook is suitable for both active and long-term investors. Get involved now with a 14-day free trial.