It has been the most difficult year in AMC Entertainment (AMC) history.

This once-in-a-hundred-year event has forced the closure of AMC’s theatres for the period between March and May 2020. It only tentatively opened some of its European theatres in June and expects to start opening two-thirds of its U.S. cinemas by the end of August.

Given its fixed cost base and overleveraged balance sheet – it is nothing short of stunning that it managed to survive with no revenue coming in the door.

It has certainly been a roller-coaster ride for shareholders as was the case for the short interest.

As you can see from above, year to date, the stock price fluctuated from $2.00 to $7.50. The short interest has fluctuated between 15% and 30% of outstanding shares.

How did AMC survive so far?

Since no revenue was coming in the door. AMC was forced into a liquidity preservation mode. Firstly, it furloughed all non-essential employees and renegotiated the deferment or abatement of most of its theatre rental expenses. Of course, a large part of its expense base comprises of interest expense that needs to be repaid (at some point) to avoid a default.

All in all, during Q2 2020, AMC has burnt through USD292 million of cash and exited the quarter with liquidity of ~USD500 million. This balance includes the proceeds of USD500 million first-lien-notes issued during April 2020.

On the 31st of July, AMC has completed an absolutely key debt restructure exercise. The outcome was extremely beneficial for AMC. It raised USD300 million of incremental cash (less transaction costs), extended the maturity of certain securities, deferred some interest expense (USD120 million to USD180 million cash outflows savings) and reduced net debt by USD555 million. The ultimate outcome is that AMC now has the financial means to survive well into 2021.

This is buying AMC’s CEO, Mr. Adam Aron, much-needed breathing time and space to focus on the recovery from the COVID-19 pandemic.

In my previous article on AMC titled, “Short AMC Entertainment To Hedge A Second Wave Of COVID-19” – I recommended shorting the stock to hedge what appeared to be an emerging and worsening COVID-19 infection rate in some U.S. states. At the time, the share price traded well above $6.

I have now changed my mind and turned bullish. I believe the calculus has changed and AMC now is attractively positioned for a buyout.

The key reasons are:

It is a multi-year agreement providing AMC with theatrical exclusivity for at least 17 days (compared with two and half months previously) and at least three weekends. Under this agreement, AMC gets to benefit with a “handsome share” of the Paid-Video-On-Demand (PVOD) revenue subsequently generated by Universal. Universal must charge a minimum of $20 for each PVOD. Whilst the exact terms of the agreement are confidential, according to Mr. Aron, this agreement was not a knee-jerk reaction:

“How much can movie going and movie viewing increase with PVOD? As AMC will meaningfully share in that new revenue stream, this potential dramatic expansion of revenues should protect AMC against the cannibalisation that admittedly will occur as some people shift from theatrical viewing to home viewing instead. This is something that we have very carefully researched, very thoughtfully modelled and something that our company has been thinking about for almost five years.“

The agreement is designed to provide Universal with flexibility to monetise their content in an optimal manner. Make no mistake about it, Universal is in the driving seat and it will decide how to optimise the theatrical exclusivity window. Mr. Aron expanded on it in the earnings call:

It is clearly all about optimising the monetisation of content. AMC is being quite smart about it – it makes sure it gets a fair chunk of the economics and potential upside.

The below chart summarises the 2019 estimated spend by original content creators: 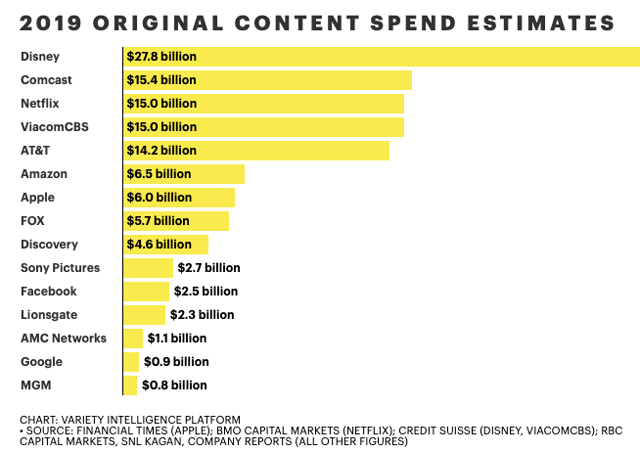 Netflix, as an example, is expected to spend over USD17 billion on content in 2020 rising to USD26 billion in 2028. Clearly, original content is a key competitive advantage and differentiator in winning the streaming war. Netflix benefited from a first-mover advantage and capitalised on it by spending billions on some big-budget productions. Now that the streaming war competition is heating up with the likes of Disney+, Apple and Amazon offerings and as the streaming industry matures – the monetisation of content is becoming so important to the profitability of the big players.

The AMC-Universal agreement is a case in point but it is still a halfway house.

Only a full vertical integration of an omnichannel strategy can fully optimise the monetisation of content.

The economics currently suggest that the best way of optimising (certain movie content) is through theatrical experience in the first few weekends followed by online streaming format (PVOD and/or part of streaming service offerings). But the exact timing of the theatrical exclusivity period varies depending on circumstances (type of movie, geography, demographics, costs, etc.) and will probably also change over time as consumer tastes evolve. Content providers would love to optimise it on a case-by-case basis.

The obstacle has been the much longer and fixed theatrical exclusivity window that currently sits at ~2.5 months. Whilst it has been shortened in recent past, it is there to secure the economics for the exhibitors. For the content providers, they currently have to choose whether to monetise the film in the cinemas or not. Most have opted the former with Netflix being the exception given its subscription-driven business model.

It is also very clear that movie-going experience is not dying, rather it is evolving. Believe it or not, many of us do not want to stay at home on the couch and prefer to watch certain movies on the big screen whilst paying for expensive popcorn and a soda. It is also clear that monetisation of big-budget movies through a Netflix-like subscription (unlimited content for a monthly subscription) is sub-optimal. Otherwise the other studios would have already gone down that path and Universal wouldn’t sign-up to the multi-year AMC agreement.

AMC’s CEO reflected on this in the context of Disney’s decision to release Mulan straight to Disney+ as PVOD:

“But I think our biggest reaction overall to the Mulan announcement is how much it reaffirms our wise and smart decision last week to take the risk and sign on to PVOD. Because right now, Disney’s choice under the current world order or these two choices, they can take it to the home or they can take it to theatres. They can’t do both. Under the PVOD model, they could have taken it to theatres and taken it to the home, essentially at the same time, admittedly, with this at least 17-day lag, where a huge percentage of Mulan’s revenues theatrically would have been booked.

As we go down the road with studios like Disney. I’m hoping that we take them out of the Hobson’s choice of having to choose between Disney Plus or theatrical. I’d like to give them the opportunity to do an and, not an or. “

Note that to watch Mulan on PVOD you need to pay for a Disney+ subscription as well as fork out $30 for the pleasure.

The secular trend is clear.

Movie content will be consumed in an omnichannel fashion through subscription services, PVOD and the theatrical experience. Currently, the channels are sub-optimally bifurcated between different owners with different interests.

In my view, there is a compelling economic rationale for one of the dominant streaming players to buy AMC. It allows for optimal monetisation of content. Just imagine the takings Netflix would have generated for “The Irishman” title by showing in a short theatre exclusivity period followed by releasing it in its normal unlimited content service. Netflix could then reinvest the proceeds in creating even more content and generating that virtuous cycle of increasing returns.

Similarly, Disney could find the sweet spot between monetising the large screen events whilst accelerating the growth of Disney+ subscribers. It could also sell Disney merchandise in AMC theatres (similar margins to popcorn, one would have thought!). The value proposition and synergies created from bundling and cross-subsidisation should not be underestimated.

AMC is trading at a very cheap valuation that is well below replacement value. It is the largest chain in the U.S. and arguably delivers a superior product to competitors given the recent billions of dollars invested in its cinemas. Any would-be-acquirer would also certainly benefit from restructuring its debt load. There is a huge first-mover advantage and there also lays the catalyst.

AMC is both a distressed and a scarce asset. This is quite a unique scenario that presents quite binary outcomes for investors.

I now believe that there is reasonably high probability of a buyout in the next 12 months (I estimate this at almost 50 percent). However, if there isn’t one – I cannot rationalise how it will sustain given the large debt on its balance sheet.

I have turned bullish now whilst very cognisant of the binary outcomes.

A word of caution, though, for readers – this is a high risk/reward play (so not for the faint-hearted). As such, I size this position accordingly.

Disclosure: I am/we are long AMC, AAPL, AMZN. I wrote this article myself, and it expresses my own opinions. I am not receiving compensation for it (other than from Seeking Alpha). I have no business relationship with any company whose stock is mentioned in this article.