Almost One Year And 60% Later, Telefonica Is Still Not A Buy (NYSE:TEF)

There were some bright spots in Telefonica’s (TEF) latest quarter, which saw largely in-line revenue and EBITDA on an underlying basis. Evidently, the increased cost/capex discipline is paying off. However, Telefonica’s financials remain under pressure from a confluence of headwinds – FX, COVID-19, and increased regional pressures (evidenced by the massive Argentina write-down). This adds to the well-known concerns around the balance sheet, as I highlighted in my last article on Telefonica, which I expect will result in a deeper cut to the dividend.

Reported EBITDA (or OIBDA as reported by Telefonica) at €2,672 million was a disappointment, however, this was mainly driven by a massive one-off impairment in Argentina of €785 million. Adjusting for the one-offs disclosed by the company (totaling -€833 million), group-level EBITDA on a “clean” basis would have been ahead of consensus expectations on the back of resilience in Germany (+0.7% Y/Y organic), along with narrowing declines at Brazil (-2.9% Y/Y), and Spain (-4.8% Y/Y).

Despite the better-than-expected results, weak operating trends remain a concern amid a challenging environment across the entire company’s footprint – Telefonica’s organic EBITDA performance in FQ3 remains the weakest among Europe’s incumbent operators. The resumption of live sports and lower roaming headwinds should help in the near-term, but any improvement will likely be gradual at best.

Optimistic Near to Mid-Term Outlook

Looking ahead, the outlook is for organic operating free cash flow (EBITDA-CapEx) to be “slightly negative to flat,” which compares to the -2.3% Y/Y growth in H1 ’20. Dividends are guided to be €0.40/share, although the company has introduced a voluntary scrip option. As for the medium term, 2022 guidance for organic revenue growth to turn positive seems optimistic. Thus far, management has not furnished any top-line numbers but does expect a c. 2%pt improvement in (EBITDA-Capex)/revenues.

In addition, Telefonica (and Telefonica Deutschland) will be pushing forward with its German fiber JV with Allianz. The ownership terms are as follows -Telefonica will take a 40% stake through its infrastructure unit, Telefonica Deutschland a 10% stake, and Allianz 50%. The JV will target over 2 million homes passed in rural and semi-rural areas, creating a fiber network of over 50,000 km.

In conjunction, the total capital outlay will reach €5 billion, with Telefonica equity up to €0.5 billion, Allianz up to €1 billion, and the remainder funded by a subordinated loan structure, along with non-recourse external financing.

Despite the better-than-expected EBITDA and FCF, Telefonica’s net debt remains elevated at €36.7 billion. In the face of a looming recession, FX headwinds, and the ongoing strategic shift, the leverage (c. 3.8x net debt/EBITDA including hybrids and other commitments) is an issue, even more so once we factor in Telefonica’s massive dividend commitment. Add in the already concerning Y/Y EBITDA contraction, and I think the path is clear for a dividend cut.

Thus far, Telefonica has not outright cut the dividend, but it has introduced a voluntary scrip option for its fiscal 2020 dividend.

As the shares are down significantly since the reference date, however, I see the dilution as already equating to a cut. While a dividend cut is not the solution to its leverage issues, it is an encouraging signal of intent. In the near term, my base case is for the DPS to be cut in half to 20c/share (down from 40c/share in fiscal 2020), with the payout relative to FCFE (ex-restructuring costs, hybrids, and spectrum) already set to rise to c.80% in fiscal 2020. 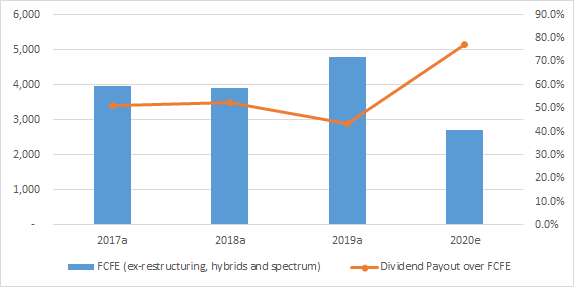 Almost One Year and 60% Later, Telefonica is Still Not a Buy

Following Telefonica’s strategic review last year, I expressed my concerns about the company’s prospects. Since then, shares have declined c.60% and now trade at €2.84/share. However, I remain cautious. Although there were some positives in the FQ3 numbers, COVID-19 and FX headwinds remain, while the massive Argentina write-down underlines regional pressures.

Above all, my primary concern remains the same as last year – Telefonica lacks a clear deleveraging path, and until balance sheet concerns are addressed, I am concerned about the sustainability of the dividend. In the meantime, I would keep an eye out for developments with regard to the 2022 strategic plan, along with potential asset disposals.