Doctors in Siberia are refusing to let Russian opposition leader Alexei Navalny be moved to a hospital in Germany despite learning he was poisoned in Siberia with a “deadly toxin”, his aides said on Friday.

The doctors treating Mr Navalny later said they had found no traces of toxic substances in his system, despite telling his wife the contrary an hour earlier.

“The diagnosis of poisoning will remain at the back of our minds. But we don’t believe the patient was poisoned,” said Anatoly Kalinichenko, deputy chief doctor of the hospital in Omsk where Mr Navalny is being treated, according to state newswire Tass.

Mr Kalinichenko said doctors had established a “practically complete” diagnosis but would not announce it publicly. “We have complications, we have the conditions that he has — they completely fit into the structure of the diagnosis we established,” he said.

The statement was a dramatic volte-face from comments doctors and police made about Mr Navalny’s condition to his family and aides earlier on Friday.

Ivan Zhdanov, head of Mr Navalny’s Anti-Corruption Foundation, said a police officer had told him Mr Navalny was poisoned with a substance “that poses a threat not only to him but to those around him”.

He said the officer had told them that the toxin required those treating Mr Navalny to wear protective equipment but did not give any further details.

Mr Navalny’s allies accused doctors of stalling on the Kremlin’s orders until the suspected poison in his system can no longer be detected.

Yulia Navalnaya, Mr Navalny’s wife, said doctors at the hospital in Omsk where the activist remains in a coma had initially agreed to his medical evacuation to Germany before abruptly changing their mind.

“We think they are doing it so that the chemical substance in Alexei’s body disappears and there isn’t a trace left — that’s why they won’t hand him over. He’s not in a good condition and we obviously can’t trust this hospital,” she said.

Mr Navalny, a critic of the Kremlin and President Vladimir Putin’s most prominent opponent, had been in western Siberia meeting opposition candidates for local elections next month and filming video for one of his viral anti-corruption investigations on YouTube.

He fell ill on a flight from Tomsk to Moscow on Thursday, then collapsed in the plane’s bathroom and could be heard groaning in pain as paramedics boarded the aircraft in a video posted by a fellow passenger. Aides suspect he was poisoned by toxin mixed into his tea at the airport.

The apparent poisoning would be the sixth such attack on Russian opposition activists in the past five years. Police refused to investigate all of the incidents, while doctors were unable to determine what was allegedly used to poison the activists.

Alexander Murakhovsky, head doctor at the hospital in Omsk, told reporters that Mr Navalny’s condition had “somewhat improved” but it was “premature” to transport him “until his condition stabilises”. Doctors are evaluating five potential diagnoses and “fighting for the life of our patient”, he told reporters.

The Kremlin said on Thursday it wished Mr Navalny a “speedy recovery” and offered to help evacuate him to a specialist toxicology clinic in Europe.

But Kira Yarmysh, Ms Navalny’s spokeswoman, said doctors were refusing to release him even though “the plane has everything necessary to transport him and the hospital in Omsk doesn’t have anything like that kind of equipment”.

Ms Yarmysh added: “Banning Navalny’s transportation is an attempt on his life being committed right now by the doctors and the lying authorities that approved this . . . Every hour of delay puts his life at risk.”

Mr Navalny’s searing exposés of official corruption on YouTube have earned him a wide following and a string of powerful enemies among Russia’s officials and oligarchs.

He recently announced he would liquidate the Anti-Corruption Foundation and relaunch it under a new name after a lawsuit from Evgeny Prigozhin, the alleged troll farm magnate and warlord known as “Putin’s chef”. 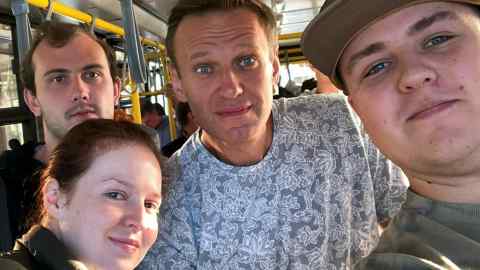 As the price of his activism, Mr Navalny has been jailed 13 times for protesting against Mr Putin, sentenced to a lengthy prison sentence that judges abruptly commuted the next day after it sparked a rally outside the Kremlin, and harassed around the clock by trolls allegedly working for Mr Prigozhin.

In 2014, his younger brother Oleg was jailed for three years in a case Mr Navalny described as “hostage-taking” in retaliation for his activism.

Last year Mr Navalny claimed he was poisoned with an unknown substance that provoked a severe allergic reaction while serving one of his many short jail sentences for protesting against Mr Putin. In 2017, a pro-Kremlin activist attacked Mr Navalny with a chemical that left him partially blind in one eye.

The EU and UK expressed concern over Mr Navalny’s health on Thursday, while French president Emmanuel Macron said France and Germany would offer “all necessary assistance to Navalny, in terms of healthcare, asylum and protection”.

US national security adviser Robert O’Brien said in an interview on Fox News that the apparent poisoning was “extraordinarily concerning” and could potentially affect US relations with Russia.