Alexei Navalny says Putin was behind his poisoning

Alexei Navalny has accused President Vladimir Putin of being behind the poisoning that put him in a coma, but insisted he would return to Russia to continue his political campaign against the Putin regime.

In his first interview since recovering from the poisoning, Mr Navalny told Der Spiegel magazine that he “won’t give Putin the satisfaction of not going back to Russia”, adding: “My task is to remain the guy who has no fear. And I have no fear!”

Mr Navalny, Russia’s best-known opposition activist, has been the focus of international attention since Germany revealed he had been poisoned with the nerve agent novichok while in Siberia. Berlin has demanded an explanation from the Kremlin, which has denied any involvement.

Mr Navalny fell ill on a flight from Tomsk to Moscow in August and days later was flown to Berlin for specialist medical treatment. He was in a coma for weeks but recovered and has since been receiving treatment in Berlin.

In the interview, Mr Navalny said the use of a new strain of novichok, which is “only accessible to a small circle of people”, showed Mr Putin must have been responsible. “I have no other versions [to explain] what happened,” he said.

He said the direct order to deploy the nerve agent could have come only from the heads of the FSB, Russia’s domestic intelligence agency, the SVR, its foreign spy service, and the GRU, Russian military intelligence.

Mr Navalny’s accusations prompted a vehement response from a Russian political elite that has normally tried to ignore him. Dmitry Peskov, Mr Putin’s spokesman, said the claims were “absolutely groundless and unacceptable”.

“Some of these statements in the mentioned publication [Der Spiegel] we consider offensive,” Mr Peskov said, according to Interfax.

He also claimed that Mr Navalny was co-operating with the CIA. “Specialists from the US Central Intelligence Agency are working with him these days,” Mr Peskov said. “This is not the first time he’s been given various instructions.”

According to the Spiegel report, the after-effects of Mr Navalny’s poisoning were visible during the interview when he had to use both hands to pour a glass of water. But whereas a few weeks ago he could barely walk, he took the stairs to reach the Spiegel offices, eschewing the lift. 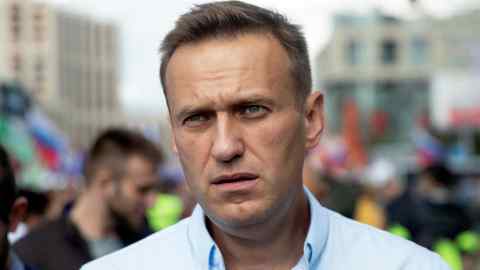 Mr Navalny said those who poisoned him had clearly planned for him to die on the plane and end up in a morgue in Moscow or the Siberian city of Omsk, where the airline crew carried out an emergency stopover after he fell ill.

“Then no one would have found any novichok, there are no mass spectrometers in a morgue,” he said. “It would have just been a suspicious death.”

Mr Navalny said he believed he was exposed to novichok in the hotel in Tomsk, where he had been on a campaign trip, and he had absorbed it through his skin. He said he assumed it had been left on a surface in the hotel room, which he had subsequently touched.

Describing how he fell ill on the plane, Mr Navalny said: “The most important impression was: you feel no pain but you know you’re dying.”

During his stay in Berlin’s Charité hospital, he was visited by Angela Merkel, the German chancellor. He said he had thanked her for interceding for him, “and she said: ‘I did my duty’”.

The activist said that in view of recent events in Belarus, where recent elections triggered mass protests against President Alexander Lukashenko, and the long-running demonstrations in the Russian eastern city of Khabarovsk over the arrest of a popular governor, the Kremlin felt it had to “resort to extreme measures”.

“The system is fighting for its survival, and we’ve just felt the consequences,” said Mr Navalny.