Alan Greenspan Walks Into a Bar 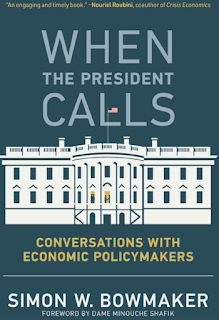 Imagine sitting at a bar and former Federal Reserve Board chairman Alan Greenspan walks in and sits next to you.

After he orders his drink, the two of you start to talk. He is in a talkative mood and you ask him about how he got involved in economics, what it is like to work at the epicenter of power in Washington D.C. and how, from an insider’s perspective, he operated while he was chairman of the Council of Economic Advisers and later as chairman of the Federal Reserve Board. He spills it all. The conversation lasts for two hours.

Now imagine, you have the resources to hire a top-notch economist to re-create this type of conversation with nearly every key US economic policymaker in the last 50 years and have him report back to you in writing about those conversations.

This, in effect, is what the new book, When the President Calls: Conversations with Economic Policymakers, is all about.

The author of the book, NYU Stern economics professor Simon W. Bowmaker, spent the last seven years talking with thirty-five economic policymakers about their work in the White House. And this book reproduces those interviews.

It features economic policymakers who advised US presidents in the last 9 administrations.

The interviews provide detailed insight into the personalities of the policymakers and also the thinking at the White House when various top policy decisions were made.

For example, Alice Rivlin was in turn Director of the White House Office of Management and Budget, and founding Director of the Congressional Budget Office and Vice Chair of the Federal Reserve.

One story she relates concerns how she managed to get the directorship of then-new Congressional Budget Office:

The language in the law about what it should do is fairly short, they hadn’t really created a process for selecting a director except that the law said that he or she should be appointed by the Speaker of the House and the president pro tempore of the Senate jointly, or on the advice of the budget committees. The two budget committee’s came up with the dumb idea of having separate search processes, so I was interviewed on both sides. The Senate voted for me, while the House voted for a very qualified guy named Sam Hughes, which meant they had two candidates.

Some months went by during which each side wanted their candidate but they didn’t know what to do about the problem. It was solved by accident because the chairman of the Ways and Means Committee, who was a very well-known congressman from Arkansas named Wilbur Mills, got into trouble. I don’t think that many people knew that he was an alcoholic, but he was, and he had a spectacular incident with an exotic dancer named Fanne Fox, in which Fanne leaped out of his car into the Tidal Basin. The Tidal Basin is not very deep, so they pulled her out. But that was the end of Wilbur Mills career because it was a well-publicized event. And that meant that he resigned as chairman of the Ways and Means Committee.

Al Ulman, who was Chairman of the House Budget Committee, then stepped up to Ways and Means. He had been a strong proponent of Sam Hughes and very opposed to me. He was said to have said, “Over my dead body is woman going to run this organization.” People said things like that in those days. But with Al Ulman out of the way, the new chairman, Brooke Adams, was not committed to the previous candidate. He told Ed Muskie chairman of the Senate Budget Committee, “If you want a woman that’s okay with me.” And that’s how I got the job…I owe it to Fanne Fox [laughs].

While Janet Yellen was terrible as chair of the Federal Reserve, her interview revealed that she was probably responsible for limiting some government interventions while heading the CEA:

What really makes a difference at the Council of Economic Advisers is shooting down bad ideas. You do that all day long. Now, you may say, “How do you that up? Can you point to that is your accomplishment?” Maybe you want to call that a negative accomplishment [laughs] but I feel that is very important role of the council. For example, during my time, I remember when there was a momentum behind an increase in the minimum wage and thinking it was just terrible idea because it wasn’t going to do anything for the people that you wanted to help.

Similarly, we shot down any potential protectionist measures…It would have been extremely stupid for us from a diplomatic standpoint to have undertaken protection actions while going around the world telling them, “We know you got all these problems, but don’t you dare do anything protectionist as well.”

Arthur Laffer comes off as a prick in his interview where he seemed to use the interview in part to settle some old scores. One I didn’t mind was his take on the Keynesian economist Paul Samuelson:

Samuelson was as mean as the snakiest snake that ever went.

So the book is a damn fun read. But the factual history of policy decisions is also laid out without Bowmaker inserting his policy opinions. It is just the facts as seen through the eyes of the policymakers themselves. The interviews shed new light on the thinking behind the Reagan tax cuts, the economic factors that cost George H. W. Bush a second term, the differences in work styles between Bill Clinton and Barack Obama, the Trump administration’s early budget process, and much more.

As far as the history of economic policymaking over the last 50 years, the book is an indispensable source. And for the economic policymaker news junkie, there is no book that comes close to giving you the insight into policy decisions that this book does. It is an important contribution to US economic policy history from the Nixon years to the early Trump years.