President Donald Trump addressed the blowout jobs numbers in a press conference Friday, comparing the U.S. economy to a “rocket ship.” Economists had been expecting the unemployment rate to jump higher in May, possibly to as much as 20 percent, but it ended up falling last month, from 14.7 percent in April to 13.3 percent. 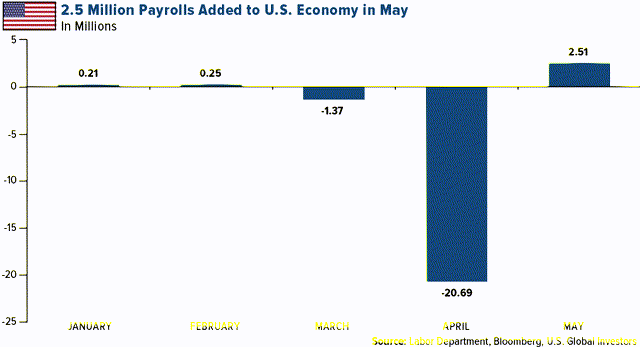 Trump praised the domestic airline industry, saying carriers are recovering nicely with the economy reopening. On Thursday, shares of American Airlines (AAL) stock exploded an unbelievable 41 percent, the most on record for a single day, after the carrier said it would increase July flights 74 percent compared with this month. Meanwhile, more and more planes are returning to the sky, with the number of parked passenger aircraft dropping below 50 percent of all fleets in the U.S., Europe and China, according to Bloomberg.

A one-time airline operator himself, Trump also singled out Warren Buffett (BRK.A) (NYSE:BRK.A), who announced in early May that he sold his positions in the four major carriers due to the spread of the coronavirus.

He’s not wrong. I normally urge investors to follow the money, but it’s a good thing that they chose not to follow Buffett’s lead this time. Since we learned of his departure, investors have flooded into airline equities, pushing them up 53.5 percent in intraday trading Friday.

READ ALSO  Don't Vote For A Psychopath: Tyranny At The Hands Of A Psychopathic Government

A recovery in commercial air travel is well underway. At the end of each business day, the Transportation Security Administration reports on the number of passengers it screened in U.S. airports. As of yesterday, that number was more than 441,000, a more-than 400 percent increase in volume from the low of 87,500 on April 14.

Gold sold off as a result, its price tumbling 2.5 percent. This marked the precious metal’s worst one-day decline since the end of March.

Based on fundamentals, the selloff was rational. Gold’s 60-day standard deviation over the past five years shows that the metal was nearing a sell signal in morning trading. 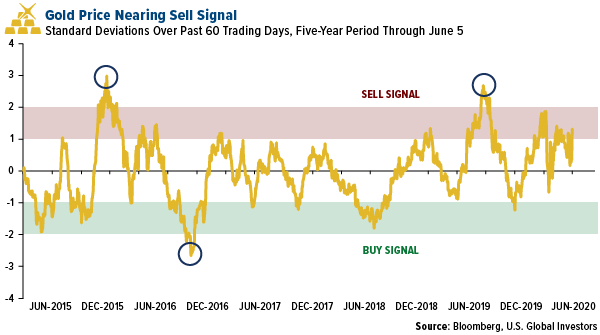 When it comes to selecting gold and precious metal mining stocks, I take a quant approach, focusing on a number of different factors.

I did some data mining on some of my favorite mining stocks and found that, year-to-date, the top 10 producers with a market cap between $200 million and $1 billion had a remarkable average of 33.2 in FCFY. 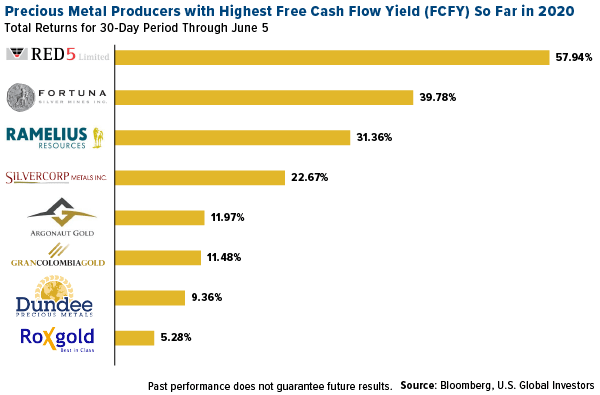 Australia-based Red 5 Limited (ASX:RED) was the best-performing mining stock of the past 30 days, up almost 58 percent. This was followed by Fortuna Silver Mines (FSM), up nearly 40 percent, and Ramelius Resources (OTCPK:RMLRF), up 31 percent for the month.

Disclosure: I am/we are long AAL, RDFLY, RMLRF, SVM, ARNGF, TPRFF, DPMLF, ROGFF. I wrote this article myself, and it expresses my own opinions. I am not receiving compensation for it. I have no business relationship with any company whose stock is mentioned in this article.

Additional disclosure: All opinions expressed and data provided are subject to change without notice. Some of these opinions may not be appropriate to every investor. By clicking the links above, you will be directed to a third-party websites. U.S. Global Investors does not endorse all information supplied by this/these websites and is not responsible for its/their content.

Standard and Poor’s 500 Airlines Index is a capitalization-weighted index. The index was developed with a base level of 10 for the 1941-43 base period. The U.S. Global JETS Index seeks to provide access to the global airline industry. The index uses various fundamental screens to determine the most efficient airline companies in the world, and also provides diversification through exposure to global aircraft manufacturers and airport companies. The index consists of common stocks listed on well-developed exchanges across the globe. Standard deviation is a quantity calculated to indicate the extent of deviation from a group as a whole.