Famed British designer Sir Jonathan “Jony” Ive will work with Airbnb to redesign its systems and create new products, the home rental site announced on Wednesday, as it prepares to go public later this year.

“Jony will also help us continue to develop our internal design team, which he believes to be one of the world’s best,” Mr Chesky added in a blog post. “I know he is particularly excited about a relationship that will evolve to become a deep collaboration with our creative team.”

The move would result in Alex Schleifer, Airbnb’s chief design officer, stepping down after six years at the company, a person familiar with the changes said.

Sir Jonathan, best known for his work on the iPhone, left Apple in June 2019 to pursue projects with his new company, which counts his former employer as a client. He was knighted in 2012.

At Airbnb, Sir Jonathan will lead efforts to revamp the company’s app and website, including the ratings-based system behind the vetting of guests and hosts.

In an email to Mr Chesky, seen by the Financial Times, Sir Jonathan wrote on Wednesday: “I love that we both look at the world with such curiosity and care so deeply about the creative process and new ideas. We have learned that despite the inherent fragility of ideas, they can be developed to become profound and powerful.”

The partnership comes as Airbnb prepares for an initial public offering by the end of this year, having staged a recovery from a huge downturn in business because of the coronavirus pandemic.

At its nadir, bookings on the platform were down by more than 80 per cent. In May, it cut 25 per cent of its workforce and scaled back some of its business lines beyond its core home-sharing product, such as a service catering to high-end travellers.

The company also cancelled its marketing efforts, saving about $1bn, and raised $2bn in debt funding. 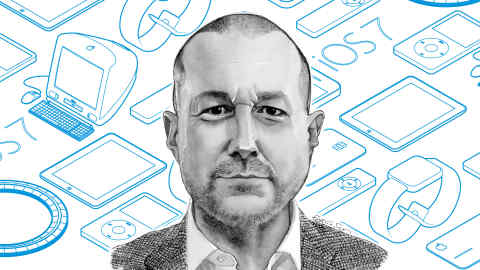 To address pandemic conditions, Airbnb adapted its homepage to promote stays closer to where a user lived, as well as promoting getaways for a month or more — an effort to capitalise on the move to working from home. The company’s Experiences product, previously centred around tour guides and physical activities, instead became online only.

As lockdowns eased, business rebounded. In some markets, according to external data from AirDNA, the number of bookings from June onwards in the US has been higher than in 2019. The average nightly rate, meanwhile, rose by more than 7 per cent as users opted to stay in bigger homes in more rural areas.

Airbnb subsequently revived plans for an IPO that, with expectations of a $30bn value, is set to be one of the biggest this year. It filed the paperwork to do so in August, and was expected to make its debut in or around early December, said a source familiar with the company’s plans.

Airbnb turned down an approach from billionaire hedge fund manager Bill Ackman’s blank-cheque acquisition company — or Spac — to take it public, the FT has previously reported.