Watsco (WSO) is a mid-cap company that operates as a distributor of HVAC supplies in North America. The company is the largest distributor in the space with over 600 locations in North America which gives it some unique advantages. The company should benefit from the continued growth in new homes built and aging equipment. Additionally, it has been increasing its dividend for the last 7 years and paying one for over 46 years.

Primarily speaking, people like to be comfortable and having air conditioning and heat that works could be considered by most as essential. For this reason, despite any recession, it is likely the business won’t suffer much. After a recent quarterly report that showed strong cash flow and decent results considering the environment, the stock rallied hard. I would consider shares a hold here given their elevated valuation levels compared to the stock’s own history.

Watsco recently reported earnings that beat on both the top and bottom lines.

The beat was primarily driven by lower expectations due to the economic shutdown. The company saw sales decline which was to be expected. Its same store or branch locations saw sales decline around 6%. Margins were squeezed about 10 basis points to 9.7% from 9.8%, and operating profit declined 7% as well. The largest segment which is HVAC equipment inclusive of residential products saw the smallest decrease of about 4%. The larger decrease came in the sales of commercial products and other HVAC products such as replacement parts. The company also reduced debt by some 85% and now only has $33 million in borrowings. This leaves it in a strong position moving forward in times of uncertainty. Watsco also reported record operating cash flow for the quarter of $219 million.

The interesting part is that since the company distributes both heating and air conditioning items, it depends greatly upon both a hot summer and a cold winter and the perfect amount of time in each season to require replacement units. Of course, the business is not just dependent upon large ticket replacement items, but this certainly drives a significant portion of the revenue. Generally, the margin on these items is a bit less than on the replacement parts for these units. This is why the company can actually grow earnings at a better pace than revenue.

For the year so far, the company has seen revenue grow a modest 3% and earnings of $3.02 per share. While the company has reported record gross profit, much of it has been thanks in part to acquisitions. It is important for investors to understand that the growth in the business is minimal and is dependent upon new home construction to grow an increased service base. As more homes are built, the life cycle for growth is extended into the future and creates a modest but growing revenue stream for the company. Additionally, heating and air conditioning is something most people in the U.S. will not go without. So during a recession, the company should still be able to maintain a strong revenue stream from maintenance, repairs, and more.

Some of the sales trends when excluding the acquisitions is what gives me concern. The company so far this year has seen a 2% decrease in its HVAC segment which accounts for almost 70% of its revenue. There has also been a 4% decrease in the HVAC products segment which accounts for more than a quarter of revenue as well as an 8% decrease in commercial refrigeration products which accounts for the remainder of revenue. I would expect the commercial refrigeration products to remain weak for the remainder of the year and into 2021. As most of the products are usually driven by restaurant strength and openings. This category has been hit particularly hard by COVID-19.

The company is continuing to make investments in the business to drive technology-enabled offerings. The offerings should ultimately reduce expenses and drive margins higher as well as operating expenses lower. 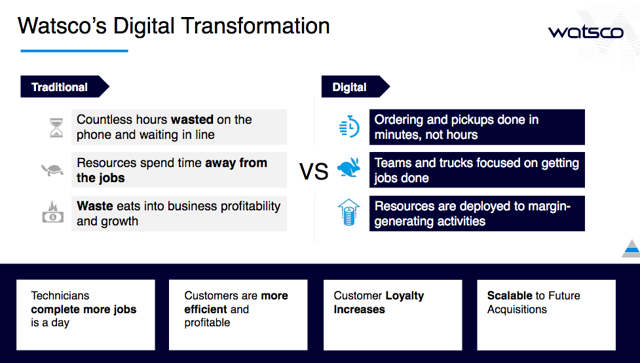 The ability to submit an order on a wireless device, or have a secretary submit the order while the service techs are on the road, allows Watsco’s customers to turn around jobs quicker. In turn, its customers become more profitable and more loyal to Watsco. Additionally, the smaller competitors who can’t afford this type of investment in infrastructure will lose market share to Watsco. As the company continues to expand, it should continue to win new customers for having wider availability of parts and inventory when needed as well.

The company has been growing its footprint through both new branch openings and acquisitions. 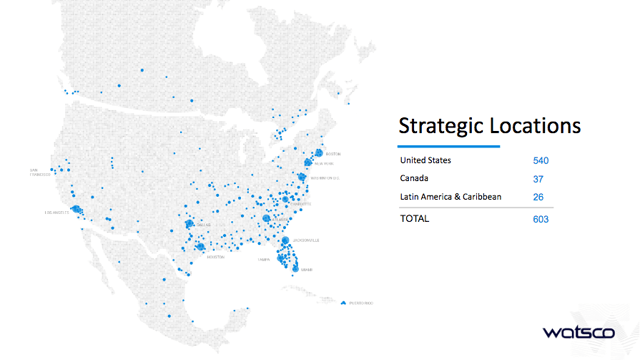 As the company acquires competition, it eliminates the need to compete solely on price and helps promote the brand further. With such a vast market available to take share from, the company can continue to slowly take share. Currently, it has about 12% market share. Reducing competition should help in reducing margin pressure as it is operating in a commodity-like business. This will be crucial in making sure the company can increase profitability in the long run. However, it would be a positive to see the company be able to grow more on an organic basis and not solely rely on acquisitions for growth. I would like to see the company put some more initiatives into place to help it do this.

READ ALSO  Bitcoin Miners In Iran Have A New Buyer: The Central Bank

The company is by far the largest in the space. With any weakness or pressure on competition due to the recent shutdown, Watsco could use the chance to further acquire smaller, family-owned businesses. 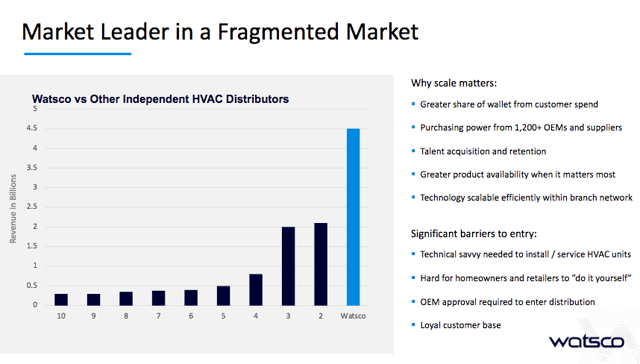 I also believe the company could start to make more transformative acquisitions in the coming years as the balance sheet has little debt and smaller acquisitions just don’t move the needle as much.

The company operates with an impeccable balance sheet as well, which should give investors confidence.

The company had $79 million in cash on hand in the recently reported quarter and $33 million in borrowings. This leaves the company in a net positive cash position of $44 million or so. So while the company operates in a somewhat cyclical environment, it will probably only see a modest decline in business in a downturn. With an untapped $560 million credit facility, the company has the borrowing power it needs should there be a greater drop in demand for its products.

Taking a look at historical average valuation, we can get an idea if the shares trade at a level that offer value. 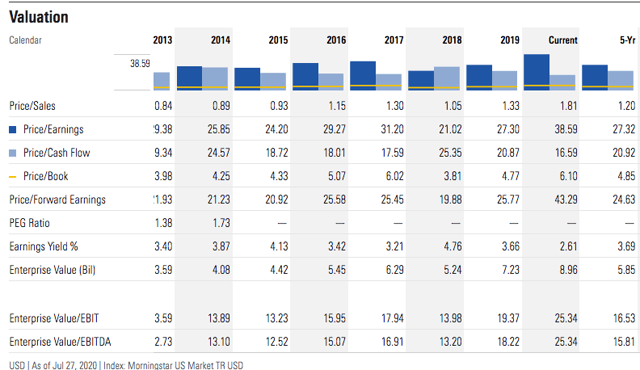 Currently, they trade at a higher P/E, P/B, P/S and forward P/E ratio than its 5-year average. Due to this, I would say if one was a long-term shareholder that shares are a hold. I would not be interested in purchasing the stock until they offered a discount to their historical valuation. I would typically look for a discount of 10% or greater to start a position.

Next, we review the dividend to see if it offers an above-average yield. 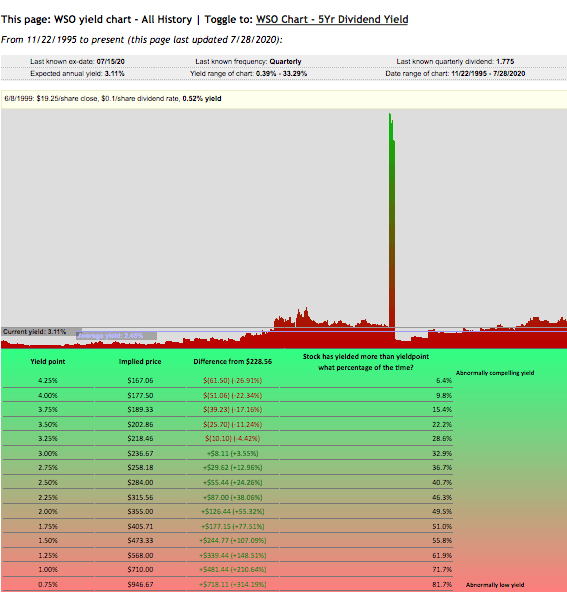 The company currently is offering a yield of 3.1% which is well above the average 2.49% it has offered typically. The yield above 3.1% has only happened about 33% of the time in the last 25 years of history, implying shares could be undervalued. This is partially helped by the fact the company has been increasing its dividend at an attractive pace. For me, this would usually signal a buying opportunity, as typically shares would resume to a more average historical yield.

READ ALSO  Will A Fracking Boom Ever Happen In Mexico?

However, the dividend seems to be getting to a level which will become harder for the company to continue to grow at the same pace. With 35 million shares outstanding the new $7.10 per share dividend will cost the company approximately $250 million per year. This compares to cash flow of somewhere around $300 million per year. We can see that another two years of 10% increases or any decline in cash flows would put the company in a tight spot in terms of coverage. The cash flow while strong is not growing at a pace that can sustain continued double-digit dividend increases. Even then, moderate 5-7% increases would still be attractive so long as the cash flow and earnings can grow alongside.

Watsco operates in an industry that does have much competition, but not by any other public player. It offers investors a way to invest in a space that has consistent demand driven by the need for heating and cooling. While an economic downturn can slow sales down, the company should have a strong recurring cash stream that will provide a stable revenue stream. This would be driven by the need for replacement and repairs that keep the need for a distributor around.

The company should start to benefit strongly as the aging equipment from the early 2000s construction boom require replacement as well. While the shares don’t trade at a discount to their typical trading valuations and currently trade at a premium, they do offer a higher than average yield. As a dividend growth investor, this entices me. However, I will continue watching the performance of the company financially to sustain this dividend despite its strong history of paying one. I would look for shares to trade back around $150 or so to start a new position personally.