After Blowing $4.5 Trillion on Share Buybacks, Airlines, Boeing, Many Other Culprits Want Taxpayer & Fed Bailouts of their Shareholders

Home Financial news After Blowing $4.5 Trillion on Share Buybacks, Airlines, Boeing, Many Other Culprits Want Taxpayer & Fed Bailouts of their Shareholders
2020-03-182020-03-18By finanz.dk

The Trump administration is putting together a rumored $850-billion stimulus package that will include taxpayer funded bailouts of Corporate America, according to leaks cited widely by the media. Trump in the press conference today singled out $50 billion in bailout funds for US airlines alone. A bailout of this type is designed to bail out shareholders and unsecured creditors. That’s all it is. The alternative would be a US chapter 11 bankruptcy procedure which would allow the company to operate, while it is being handed to the creditors, with shareholders getting wiped out.

So get this: The big four US airlines – Delta, United, American, and Southwest – whose stocks are now getting crushed because they may run out of cash in a few months, and who would be the primary recipients of that $50 billion bailout, well, they wasted, blew, and incinerated willfully and recklessly together $43.7 billion in cash on share buybacks since 2012 for the sole purpose of enriching the very shareholders that will no be bailed out by the taxpayer (buyback data via YCHARTS): 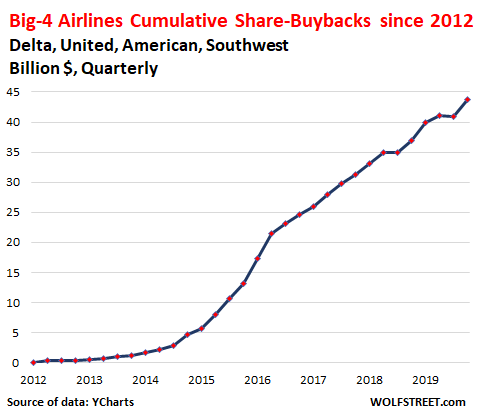 Share buybacks were considered a form of market manipulation and were illegal under SEC rules until 1982, when the SEC issued Rule 10b-18 which provided corporations a “safe harbor” to buy back their own shares under certain conditions. Once corporations figured out that no one cared about those conditions, and that no one was auditing anything, share buybacks exploded. And they’ve have been hyped endlessly by Wall Street.

The S&P 500 companies, including those that are now asking for huge bailouts from taxpayers and from the Fed, have blown, wasted and incinerated together $4.5 trillion with a T in cash to buy back their own shares just since 2012: 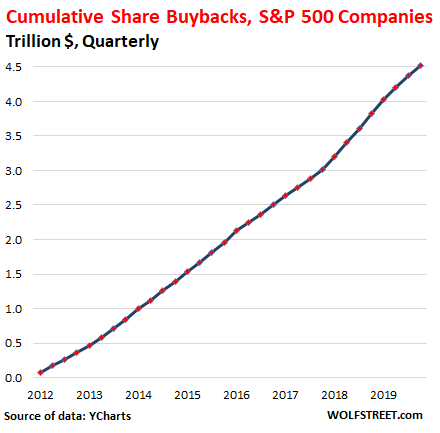 And those $4.5 trillion in cash that was wasted, blown, and incinerated on share buybacks since 2012 for the sole purpose of enriching shareholders are now sorely missing from corporate balance sheets, where these share buybacks were often funded with debt.

And the record amount of corporate debt – “record” by any measure – that has piled up since 2012 has become the Fed’s number one concern as trigger of the next financial crisis. So here we are.

In 2018, even the SEC got briefly nervous about the ravenous share buybacks and what they did to corporate financial and operational health. “On too many occasions, companies doing buybacks have failed to make the long-term investments in innovation or their workforce that our economy so badly needs,” SEC Commissioner Jackson pointed out. And he fretted whether the existing rules “can protect investors, workers, and communities from the torrent of corporate trading dominating today’s markets.”

Obviously, they couldn’t, as we now see.

Enriching shareholders is the number one goal no matter what the risks. These shareholders are also the very corporate executives and board members that make the buyback decisions. And when it hits the fan, there is always the taxpayer or the Fed to bail out those shareholders, the thinking goes. But this type of thinking is heinous.

Boeing is also on the bailout docket. It alone wasted, blew, and incinerated $43 billion in cash since 2012 to manipulate up its own shares until its liquidity crisis forced it to stop the practice last year, and its shares have since collapsed. 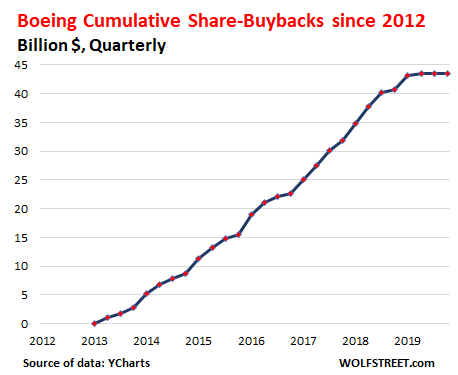 If Boeing’s current liquidity crisis causes the company to run out of funds to pay its creditors, it needs to file for chapter 11 bankruptcy protection. Under the supervision of the Court, the company would be restructured, with creditors getting the company, and with shareholders getting wiped out.

Boeing would continue to operate throughout, and afterwards emerge as a stronger company with less debt, and hopefully an entirely new executive suite and board that are hostile to share buybacks and won’t give in to the heinous clamoring by Wall Street for them.

No one could foresee the arrival of the coronavirus and what it would do to US industry. I get that. But there is always some crisis in the future, and companies need to prepare for them to have the resources to deal with them.

A company that systematically and recklessly hollows out its balance sheet by converting cash and capital into share buybacks, often with borrowed money, to “distribute value to shareholders” or “unlock shareholder value” or whatever Wall Street BS is being hyped, has set itself up for failure at the next crisis. And that’s fine. But shareholders should pay for it since they benefited from those share buybacks – and not taxpayers or workers with dollar-paychecks. Shareholders should know that they won’t be bailed out by the government or the Fed, but zeroed out in bankruptcy court.

The eventual costs of enriching shareholders recklessly in a way that used to be illegal must not be inflicted on taxpayers via a government bailout; or on everyone earning income in dollars via bailout from the Fed.

The solution has already been finely tuned in the US. Delta, United, and American have all already gone through chapter 11 bankruptcies. They work. The airlines continued to operate in a manner where passengers couldn’t tell the difference. Shareholders got wiped out. The airlines were essentially turned over to creditors, which then issued new shares to new shareholders, and the old shares became worthless. The new airlines emerged as stronger companies – until they started blowing it with their share buybacks.

Companies like Boeing, GE, any of the airlines, or any company that blew this now sorely needed cash on share buybacks must put the ultimate cost of those share buybacks on shareholders and unsecured creditors. Any bailouts, whether from the Fed or the government, should only be offered as Debtor in Possession (DIP) loans during a chapter 11 bankruptcy filing where shareholders get wiped out. In other words, companies that buy back their owns shares must be permanently disqualified for bailouts; though they may qualify for a DIP loans in bankruptcy court if shareholders get wiped out. Because those proposed taxpayer and Fed bailouts of these share-buyback queens are just heinous.

The eeriness of the whole situation may leave permanent marks on consumers and business-decision makers. Read… Lockdown in San Francisco, Silicon Valley & the East Bay: We’re to “Shelter in Place.” What it Means Now & Long Term

Previous PostFed to lend against stocks and bonds in bid to stabilise marketsNext PostItaly pumps cash into coronavirus-hit economy as death toll passes 2,000