Ghana and Ivory Coast have hit out at several big chocolate companies and traders including Mars, Hershey and Olam, accusing them of trying to circumvent a premium on cocoa meant to help fight farmer poverty in west Africa.

The accusations by the two countries, which account for more than 60 per cent of global cocoa production, mark an escalation of a tussle between nations that grow the key chocolate ingredient and the confectionery industry.

In a letter seen by the Financial Times, the two countries accused the chocolate producers of trying to avoid a $400-a-tonne “living income differential”, or LID, that is added to the price of cocoa bought from Ghana and Ivory Coast. In addition to Mars, Hershey and Olam — all large industry players — the letter also mentions four smaller cocoa traders.

The Ivorian Conseil de Café Cacao and the Ghana Cocoa Board, the industry regulators, called the alleged strategies a “breach of faith”. In a separate letter to Hershey, the authorities banned the Pennsylvania company from operating chocolate sustainability programmes in the two countries.

The letters’ authenticity was confirmed by two industry sources. The regulators could not be reached for comment.

Mars said it “categorically” denied the accusations. “We were the first major manufacturer to support the LID. In addition . . . this year we have invested more in Côte d’Ivoire and Ghana sustainability programmes,” it added.

Hershey said the “misleading” statement from the two countries was “unfortunate” and they had jeopardised critical programmes that helped farmers. The confectioner said it was participating in the LID for the current crop year and would continue to do so, adding that it looked forward to discussions with Ivory Coast and Ghana to continue “the sustainability programmes that are benefiting cocoa farmers today”.

Gerard Manley, head of cocoa trading at Olam, said Ivory Coast and Ghana were “critical” to the company and the industry. “We appreciate that both countries understand Olam’s significant investment in people and infrastructure, and we reiterate our strong support of farmers and growing farmer income,” he said. 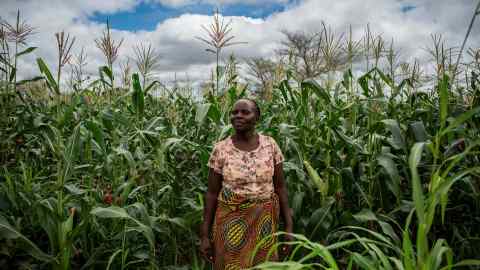 The heightened tensions come after Hershey this month took the rare step of sourcing its cocoa beans from the futures market in New York. Analysts said the purchase through the exchange meant the maker of Reese’s Peanut Butter Cup did not have to pay the LID.

Buyers of cocoa beans, the main chocolate ingredient, normally purchase the commodity from traders that source directly from Ghana and Ivory Coast.

Sustainability has become a key part of how chocolatiers market their products in the west. Both the EU and UK are considering rules that would outlaw importing products and commodities from illegally cleared land, while Germany is considering a due diligence law for supply chains.

The $400-a-tonne LID was announced last year by the Cocobod and CCC as a way to lift the incomes of the largely impoverished, mostly smallholder farmers who produce most of the main ingredient in the world’s $100bn chocolate industry.

Cocoa prices were hit by a fall in chocolate demand because of the pandemic earlier this year but rebounded in New York to pre-Covid levels on the back of Hershey’s recent purchases, trading just above $2,700 a tonne. However, analysts said some buyers might have been trying to avoid committing themselves to purchases when prices are expected to fall on plentiful supplies and uncertain consumption levels.