Africa has long been a cash drain for investor money. So many times, a hopeful investment went south that for a while I simply ignored anything remotely in the area. But then, Africa Oil (OTCPK:AOIFF) partnered with Total (NYSE:TOT) to announce a discovery off the South African coast.

South Africa is one of the better places to do business in the world. The country has long been a bastion of stability on a continent where wars and revolution break out over dinner. The business environment is very supportive, and South Africa has one of the more developed economies in the area. Therefore, unlikely many ventures in Africa, this joint venture has a good chance of reasonable success.

In addition, the company announced a joint venture with Royal Dutch Shell (NYSE:RDS.A) (NYSE:RDS.B) for some acreage off the coast of South Africa. Usually, major companies get involved when they sense a big payoff. Therefore, one partnership with Total and another with Royal Dutch Shell indicate that the future is pretty bright and could be very significant to a smaller company like Africa Oil.

However, any offshore joint venture usually needs years to determine the viability of the acreage. Even with the discovery by Total that was announced, it could easily be 5 years until any companies see any cash flow from that discovery. That makes this issue somewhat speculative. 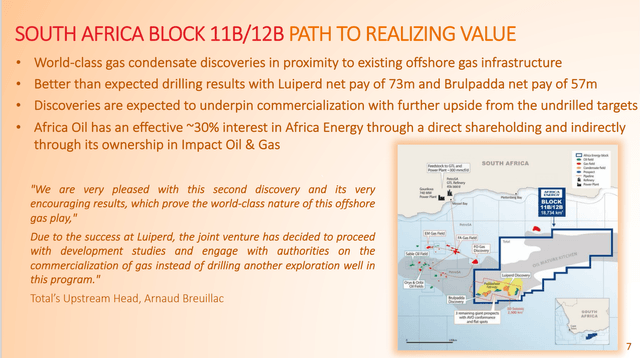 As with nearly any offshore program, there is a lot of acreage left to explore. However, the value of that acreage has yet to be determined. Discussing commercialization is a big step forward. So many times, a discovery will be abandoned for lack of volume to make offshore production commercially viable. Note though that there are other producing areas located nearby. That makes commercial viability a lot easier because infrastructure and service resources are often available to decrease costs.

The company does have cash flow elsewhere in Nigeria. But that part of Africa is not nearly as supportive as South Africa. I would personally rate this as a risky source of cash flow. 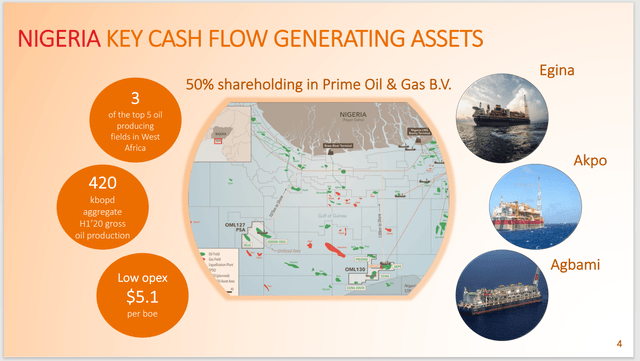 So far, the company has been receiving some dividends to repay debt incurred for the purchase of an interest in the producing assets shown above. Nigeria is a country that does support its oil and gas industry. However, the government control of the country is somewhat questionable. That makes the onshore part of the industry challenging.

The best that can be said about this asset is that, so far, it is performing as expected, and the debt is being quickly repaid. The best possible outcome would be for all debt to be repaid and for the company to build a cash balance just in case trouble rears its ugly head. There are definitely worse places to do business than Nigeria. But there are also better.

Despite the cash flow from product, in many ways, Africa Oil is still a development-stage company. 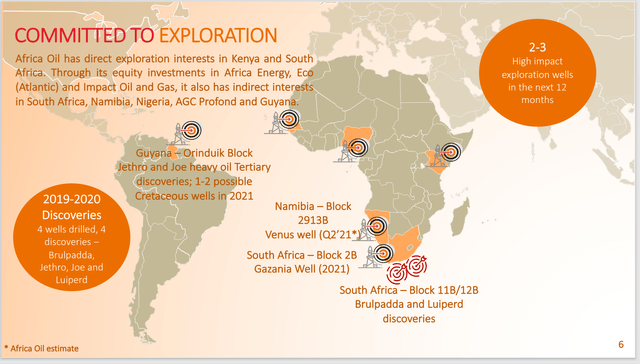 Africa Oil holds a significant amount of Eco Atlantic (OTC:ECAOF) stock. Eco Atlantic is partnered with Tullow (OTCPK:TUWLF) off the coast of Guyana and possibly Suriname to explore for oil. This partnership did announce two discoveries.

To highlight the difference between larger partnerships in the same area, the quality of the finds needs to be examined. Exxon Mobil (NYSE:XOM) and Hess (NYSE:HES) have a long list of Guyana discoveries of light oil. However, the Tullow and Eco Atlantic partnership discovered heavy oil with some presence of sulfur. That discovery has a very different profit potential than does the Exxon Mobil partnership discovery.

Oftentimes, the larger companies have superior resources to find the low cost reserves. A company like Eco Atlantic generally ends up in a partnership with the scraps that the “big boys” did not want. Therefore, unless the drilling results are a surprise, the profitability will not be as low cost as the Exxon Mobil partnership. In fact, the first thing the Eco Atlantic partnership must do is figure out the profitability under various pricing scenarios.

There is still a chance that the Guyana discoveries could be plugged and abandoned, or that the project could be put on hold until there is a better pricing scenario. Heavy oil tends to be a discounted product compared to light oil, and sulfur is an unwanted pollutant in oil that will cost extra to remove.

Eco Atlantic and its partners will still explore for light oil prospects. However, there is every chance that the prospects will not be as good as the Exxon Mobil acreage. 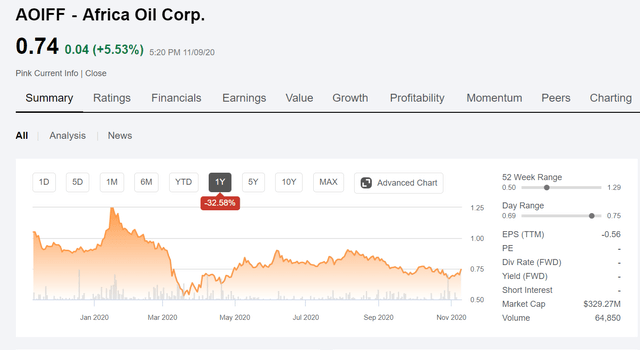 This stock has a decent capitalization compared to many in the industry. Development stage or concept stocks are often valued on future forecasts. That definitely appears to be the case with this company.

Cash flow has begun from the Nigerian production. However, the company has some interests in some rather potentially large prospects. Usually, a company like this will have the subsidiary taken over in the event of a large enough discovery. In less common cases, the whole company could be acquired.

Right now, the production itself is important to the extent there is cash flow available to prevent future dilution due to cash needs. The largest risk by far is that cash flow will be insufficient to support the various offshore projects. Then, the company would have to sell stock and dilute current shareholders materially.

The cash flow from the Nigerian investment appears to be holding up well. What would materially help this company long term is cash flow from the South African projects as South Africa is viewed as one of the best countries to do business in Africa. Such a source of cash flow would be viewed as very reliable by the market. That cash flow could be on the way within five years. But the key will be the cash needed by Africa Oil to benefit from that cash flow as well as the available cash flow during the construction period before first production.

Africa Oil has made some solid progress since my last article. But Africa tends to be a very risky place to do business. Company managements really have to know “the lay of the land” to be successful in Africa. So far, this company has navigated those challenges successfully. But there is probably a couple of more years of progress necessary before the current stock price is justified. Nonetheless, some venturesome investors will want to hold the stock in the hopes of a major “homerun” discovery. Every once in a while, those happen. But more than likely Africa Oil will grow through the “a lot of singles and doubles” route.

I analyze oil and gas companies like Africa Oil and related companies in my service, Oil & Gas Value Research, where I look for undervalued names in the oil and gas space. I break down everything you need to know about these companies – the balance sheet, competitive position and development prospects. This article is an example of what I do. But for Oil & Gas Value Research members, they get it first and they get analysis on some companies that is not published on the free site. Interested? Sign up here for a free two-week trial.

Disclosure: I am/we are long HES XOM. I wrote this article myself, and it expresses my own opinions. I am not receiving compensation for it (other than from Seeking Alpha). I have no business relationship with any company whose stock is mentioned in this article.

Additional disclosure: Disclaimer: I am not an investment advisor, and this article is not meant to be a recommendation of the purchase or sale of stock. Investors are advised to review all company documents and press releases to see if the company fits their own investment qualifications.