The collapse in foreign direct investment to African economies during the pandemic has bolstered the need for intra-African trade, the continent’s top trade official has said, warning that it will take years for investment to return.

“Capital is a coward, so it will take some time before foreign direct investment starts flowing back in full force to the continent,” said Albert Muchanga, the African Union’s commissioner for trade and industry.

The total value of greenfield investments in Africa in the first three months of 2020 fell 58 per cent, year-on-year, according to the UN Conference on Trade and Development. Africa’s natural resource-dependent economies had been particularly exposed, Mr Muchanga said, as the prices of exports, including oil and copper, slumped and investors pulled funds from frontier markets in search of safer investments.

But rather than wait for that foreign capital to return, African economies should drive growth by focusing on domestic production and intra-African trade, he said.

Mr Muchanga is leading the effort to finalise the Africa Continental Free Trade Area (AfCFTA) agreement, which will create a single tariff-free $3tn market, ahead of its implementation on January 1. He said AfCFTA will be essential to enabling Africa to bounce back.

“If Africa is to recover quickly . . . it has to undertake trade in value-added products and the best platform for that export diversification is the AfCFTA,” he said. 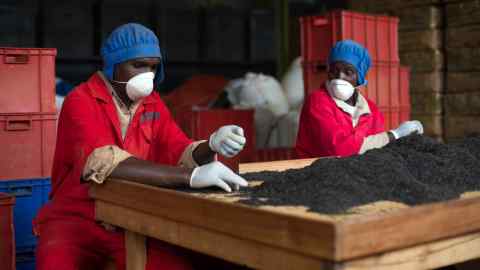 FDI flows are expected to contract by between 25 per cent and 40 per cent this year, according to a June report by Unctad. Services such as aviation and tourism will be hit particularly hard, along with manufacturing industries linked to the global supply chain — “a sign of concern for efforts to promote economic diversification and industrialisation in Africa,” it said.

FDI flows to Africa had already been falling before the pandemic sparked a global shutdown. Inflows fell 10 per cent in 2019 to $45bn. But the trend has accelerated. As of April, the number of cross-border merger and acquisition projects targeting Africa had fallen 72 per cent from last year’s monthly average.

Africa has so far largely escaped the worst of the pandemic — it only recently crossed 1m confirmed infections — but health experts have warned that cases and deaths are accelerating. That is in part because of the lifting of lockdowns in countries across the continent in recent months.

Though many African countries shut down early, when they had only a handful of confirmed cases, those lockdowns were hard to maintain in informal economies where most people need to work every day to support themselves and their families.

“Quite a number of developed countries are able to provide stimulus packages . . . but for African economies whose governments have very narrow fiscal space, it becomes very difficult to have a prolonged lockdown,” Mr Muchanga said. “Because if there is a lockdown, people have to eat — where do they get their money?”