AerCap Holdings (NYSE:AER) is the largest owner of commercial airplanes in the world with a portfolio of 939 units with a net book value of $35.9 billion as of the end of 2019.

With the coronavirus spreading across the globe, the aviation industry is a bad place to be for investors. Fear and travel restrictions have pushed many airlines across the globe to significantly decrease or halt operations in a bid to save funds until the situation normalizes. Salaries have been cut or employees get furlough so that the majority of payments for the foreseeable future remain debts and leases. Amid all of this, the main risk for aircraft leasing companies like AerCap are write-downs as an airplane coming from a defaulted airline can’t be leased at the same rate.

However, I think most people are overestimating the risks of defaults in the airline industry as governments seem willing to provide bailouts. Unlike hotels or restaurants, a flag carrier is a national symbol and is among the first to receive assistance from the government. In Europe, where I live, we’ve already seen bailouts for Alitalia,Norwegian (OTCPK:NWARF), SAS (OTC:SASDF) and Finnair (OTC:FNNNF), and it’s been just a week under lock-down in most countries. The U.K. government is going a step further with a plan to buy shares in airlines affected by the coronavirus pandemic.

AerCap and its liquidity

As of the end of 2019, the company had 939 aircraft, which were on lease to 152 customers in 67 countries. It also managed another 96 aircraft and had 299 new aircraft on order. AerCap had around $40 billion in contracted future lease rents with 97% of the portfolio contracted through 2022.

Looking at the liquidity, the company has at its disposal around $40 billion of potential sources over 2020. The net book value of unencumbered aircraft is over $28 billion, which I consider accurate as the company has managed to sell aircraft over book value for 15 years now.

Another $3.1 billion comes from operating cash flow during the year, but I think the number could be lower due to deferral from customers. The company confirmed that its clients in China have deferred amounts equal to some 3% of its annual lease revenue. These are expected to be repaid by the end of 2020, but I doubt that would be the case for other countries.

Also, earlier in March, Bloomberg reported that AerCap planned to draw down some or all of the $6.6 billion in credit to which it has access.

Still, if we take capex and debt repayment as $7 billion in 2020, the whole sum can be covered almost entirely by the additional $6.6 billion in drawn down debt. Solvency is not the issue here, the potential write-downs are. In a typical year, airline bankruptcies affect around 1% of AerCap’s lease revenues. That percentage is certain to be higher in 2020, but it’s unclreat by how much.

Overview of counterparty risk by region

There are three major markets for aircraft lessors from a geographical point of view – China, Europe and the USA. Ironically, China is the safest place to be right now as the coronavirus has been contained there. Air traffic in the country is improving at a significant pace following the peak of active cases, as can be seen from these two graphs: 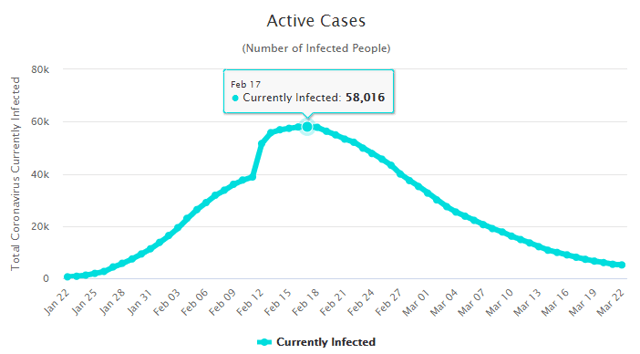 I think that based on current data, it may take longer than a month for Europe and the USA to contain the virus. However, once it’s contained, the recovery in air travel should be as swift as in China’s case as consumer confidence returns.

Looking at AerCap’s geographical exposure, over 57% of its lease revenues came from China, Europe and the USA.

Here also are the top five customers, which accounted for 26.6% of lease revenues in 2019:

Let’s take a look at AerCap’s counterparty risk by region.

With the airlines being state-owned and the virus contained, I don’t see a major risk of write-downs for AerCap unless there is a second wave in the near future. Like a mentioned, 3% of lease revenues were deferred, which is more than a fourth of 2019’s revenues from the country.

With the current rate of recovery in air traffic, things could be back to normal in around a month.

A total of 28% of AerCap’s lease revenues came from Europe in 2019, the most from any continent in the world. Its main customers in Europe are Air France-KLM (AFRAF; OTCPK:AFLYY) and Norwegian, which together account for 7.5% of lease revenues.

As I mentioned, several European airlines have already been bailed out and even some companies from the Lufthansa (OTCQX:DLAKF; OTCQX:DLAKY) group are seeking state aid.I think that most major players will be saved but some regional airlines might not survive.

Norwegian is getting half of the $543 million of the local government’s crisis package, which just comes to show you that flag carriers have a special place in the hearts of governments in Europe.

Looking at Air France-KLM, the company drew down a revolving credit facility for a total amount of $1.2 billion and is rumored to be poised to tap French government-backed loans.

The other bailed out European airlines that I mentioned at the beginning of the article are also AerCap customers, as can be seen here.

Overall, I don’t think the impact from the coronavirus in Europe will be significant for Aercap. There will be a lot of loans, guarantees, even stake purchases from governments and the major airlines seem set to survive this. The only casualty so far is Flybe, which is a regional airline.

On 22 March, the more than $1 trillion coronavirus stimulus bill failed in the U.S. senate. It envisioned $50 billion in secured loans for passenger airlines, which should help them get through 2020.

The problem with the bill was the lack of strings attached to this aid. The six major airlines in the USA are facing a lot of scrutiny for spending on average 96% of free cash flow on share buybacks over the past decade.

It’s very unlikely that the sector will be allowed to collapse, but I think that the final bailout package could include a combination of several strings attached such as a ban on share buybacks and dividends, freeze of executive remuneration, and commitments with regard to wages and layoffs.

The USA accounted for 10.9% of AerCap’s lease revenues in 2019, and the majority of that came from American Airlines (NASDAQ:AAL). The latter should still be well-funded with more than $7 billion of cash, short-term investments and undrawn revolving credit facilities as of the end of 2019.

4) Rest of the world

Among the other clients, the most significant exposure of AerCap is to LATAM Airlines (NYSE:LTM), which has operations across Argentina, Brazil, Chile, Colombia, Peru and Ecuador. A total of 4.5% of AerCap’s lease revenue came from this company in 2019.

LATAM Airlines is planning a 70% system-wide cut in its capacity and it can survive for around four months if all of its airplanes are grounded according to analysts.However, I think that the group should be able to survive for more than that considering it already cut the salaries of its 43,000 employees by half.

I think LATAM Airlines will be able to survive the effects of the coronavirus even without government aid. However, if one is offered, I expect it to come from Brazil as the latter accounts for almost 40% of its revenues by point of sale.

The coronavirus epidemic is presenting the aviation industry with the most significant destruction of demand it has ever faced and many airlines won’t be able to survive without government aid. AerCap is shielded from insolvency thanks to its strong balance sheet but the same can’t be said for the value of its assets.

However, many governments across the world seem willing to save their airlines and several companies have already been bailed out in Europe. I think some small airlines and some regional airlines won’t make it and this will affect AerCap’s balance sheet, but not in a significant way. The fears seem to be overblown and the company looks cheap at 0.23 times book value.

Disclosure: I am/we are long AER. I wrote this article myself, and it expresses my own opinions. I am not receiving compensation for it (other than from Seeking Alpha). I have no business relationship with any company whose stock is mentioned in this article.