AECOM: Not A Whole Lot To Like From A Shareholder Perspective (NYSE:ACM)

AECOM (ACM) has participated in the bounce-back of the market this year as investors price in infrastructure spending around the world. As a global leader in infrastructure consulting, AECOM will grab its piece of government spending and help build critical infrastructure for society… but should investors care? For a company that does not pay a dividend and is constantly issuing shares as of late, there is not a whole lot to like about AECOM (I will enjoy the new Eglinton Crosstown rail system in Toronto, though). This article will take a look at AECOM’s historical profitability and what it means to be a shareholder of the company.

In a highly competitive market bidding for government and private projects, AECOM has only been able to earn a profit in 7 out of the past 10 years. Over the past decade, AECOM has earned an average return on equity (ROE) and return on invested capital (ROIC) of 3.0% and 3.9%, respectively. This level of profitability is significantly below my rule of thumb of 15% ROE and 9% ROIC, suggesting the company is not able to maintain, let alone increase, its intrinsic value over a business cycle. These poor economics become more evident later as we look at the recent share issuances of the company. 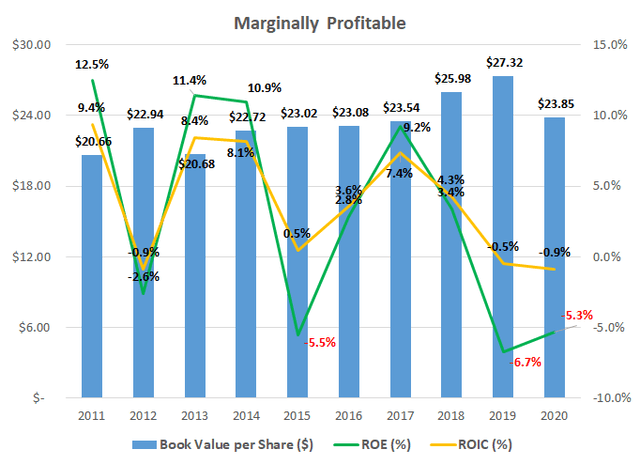 For shareholders, growth always needs to be considered on a per share basis as simply getting bigger is not necessarily desirable for shareholders. Over the past 10 years (and based on 2-year averages to take into account the dip from 2019 to 2020), revenues at AECOM have grown at an average compound rate of 7.5%. However, on a per share basis, growth has been just over half this rate at 3.9%. Much of this growth was not organic but came from the 2015 acquisition of URS Corporation which was done to accelerate AECOM’s strategy of adding key capabilities and expertise in markets including construction, oil & gas, power and government services. 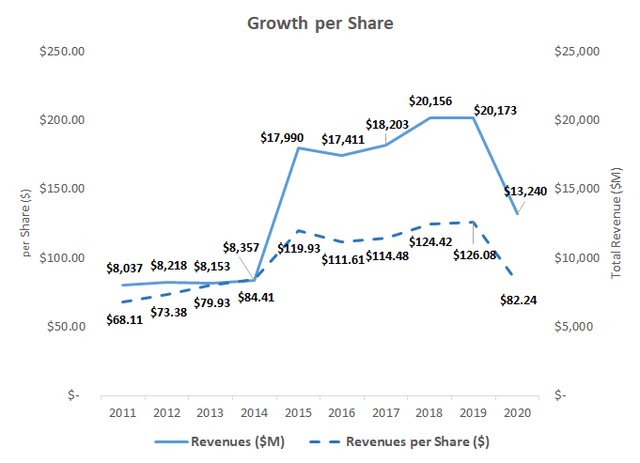 This discrepancy in total and per share growth is due to the fact that AECOM has issued a large amount of shares over the past decade. The majority of this share issuance came in 2015 when AECOM acquired URS Corporation in a cash and stock deal valued at $4 billion, but the trickle of share issuances continued even after that deal. Since 2015, AECOM has issued another 11 million shares for an average annual issuance rate of 1.4%. 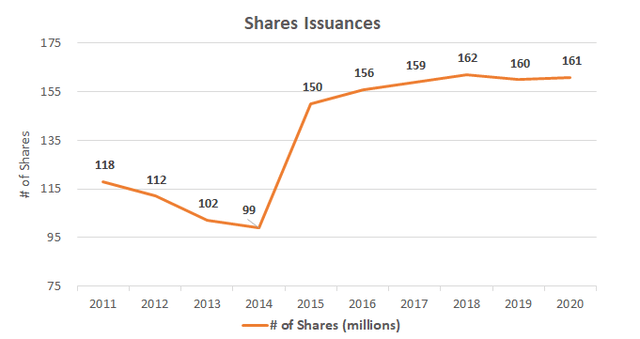 As can be seen in the graph below, capital expenditures and acquisitions used up on average 99% of cash flow from operations over the past decade. But we should exclude the transformative 2015 acquisition (which is literally off the charts) and look at a more normalized figure of 62% of cash flows from operations being spent on capital investments and acquisitions. This level leaves approximately 38% to be returned to investors in the form of dividends and share repurchases. With average cash flow from operations of $678 million over the past five years, this 38% would imply free cash flow to shareholders of $259 million for only a 3.3% free cash flow yield at the current $7,882 million market capitalization. Under this free cash flow analysis, it would take just under 4 years to be able to fulfill the $1 billion share repurchase program.

While AECOM is a great corporation from the perspective of society’s needs, there is not a lot to like from a shareholder perspective. Profitability is subpar with average ROE of 3.0% over the past decade and 3 unprofitable years. A free cash flow analysis indicates potential returns to shareholders could only be around 3.3% and further cements the poor business economics. This is a business to pass on at current valuations, but I look forward to riding their newly built Eglinton Crosstown rail system in my hometown of Toronto.

Additional disclosure: Disclaimer: While the information and data presented in my articles are obtained from company documents and/or sources believed to be reliable, they have not been independently verified. The material is intended only as general information for your convenience, and should not in any way be construed as investment advice. I advise readers to conduct their own independent research to build their own independent opinions and/or consult a qualified investment advisor before making any investment decisions. I explicitly disclaim any liability that may arise from investment decisions you make based on my articles.