Advance Auto Parts Is On The Right Track (NYSE:AAP)

Shares in Advance Auto Parts (NYSE:AAP) have already rebounded from the March sell-off due to the COVID-19 scare. The market is shrugging off any short-term uncertainty and has focused instead on the long-term prospects of AAP, which after struggling to integrate the acquisition of General Parts International, or GPI, is finally starting to show some promise.

Conditions might become favorable for the DIY and DIFM (do-it-for-me) markets. The last economic recession of 08′-09′ boosted sales growth across the sector. That could also be the case if the economy doesn’t rebound in a “V” shape recovery. However, short-term growth might be muted as long as states keep stay-at-home orders, impacting miles driven, which in turn lowers the chance for cars needing repairs. That said, AAP looks fairly valued at this point.

Looking at the numbers

On the surface, the acquisition of GPI in 2014 was a promising move by the company. AAP started as a DIY focused retailer; however, with the acquisition of GPI, it started changing its business model to focus on the consolidation of the fragmented DIFM (or professional) market. The added scale and efficiencies were selling points of the acquisition, as smaller auto part retailers selling to the professional market would have trouble competing with the bigger AAP. Large retailers can have cost advantages by spreading the costs of inventory and advertising over a larger store base compared to a single mom-and-pop shop. That also improves the service of AAP, which can offer more SKUs and inventory availability, an important attribute in a market in which speed of service is essential. The more cars a mechanic can turn over in his shop, the better he is, which in turn fuels more sales growth for AAP.

However, by looking at the numbers, the acquisition of GPI proved to be a challenge for AAP, especially in 2016 and 2017. Integrating GPI operations into AAP meant closing down underperforming stores, finding the right mix of Advance Auto Parts and Carquest retail stores, aligning supply chains, and optimizing IT systems.

READ ALSO  US unemployment falls to 11%, but new shutdowns are underway

Since the acquisition, it has been working in reducing and optimizing inventory levels. Better inventory management would increase efficiencies to the business and be a cash flow driver, and that capital can be used to reinvest back into the business in areas that need some polishing.

The company was also clear in its message to cut unnecessary costs:

Our actions, by design, are not yet positively impacting short-term cost performance across our P&L both in cost of goods and SG&A. Our productivity plan is to permanently reduce cost in our systems with actions we know are sustainable, and do not impact our customers. We’re determined to permanently and properly remove waste in our system that will allow us to further invest in our valued customers while expanding margins over the long-term. – Q4 2016 call

Fast forward to today, and we see a management team that has been keeping up with its promises. If we look at the trend in G&A costs since 2016, we see a downward trend. As a percent of total sales, G&A was 36.3% in 2017. Today it only accounts for 34.6% of sales, improving by 170 basis points, and contributing to the expansion of operating margins.

Looking at the trend analysis of the income statement, we see that weakness in gross margins is actually the result of a decreasing top-line and not of accelerating COGS growth. COGS has remained stable.

Accelerating revenue growth is the key

With a stable cost of goods sold and lower operating expenses due to management initiatives to cut unnecessary costs, revenue growth is key for margin expansion.

We started seeing cracks in revenue growth starting in 2016. That was also a year of significant change for AAP, with an overhaul in the executive team with a new CEO and CFO, and transitions in the board of directors.

Sales in 2016 were impacted by store consolidations and closures as the company implemented adjustments in its store footprint and lower demand due to colder weather:

Our comp performance in the quarter was disappointing. We continue to experience shortfalls on execution, driven by availability and service levels. – Q1 2016 call

Headwinds remained for the next eight quarters but finally started stabilizing in 2018, which saw positive revenue growth contributing to gross margin expansion. Of course, COVID-19 threw a curveball to the majority of businesses, AAP included, which saw once again negative comp as stay-at-home-orders were implemented and the DIFM market was also impacted

There could be benefits after COVID-19

With cost structure implementations already in place before COVID-19, AAP was in a good position to manage its way through recent headwinds. That said, cost reductions were not enough to offset the fast decline in sales, but there were some positives coming out of the Q1 2020 call. Most notably, the company believes the first week of April was the lowest point of the pandemic impact, as some states are relaxing shelter-in-place measures.

Also, as more people were ordered to stay at home, that increased the number of DIY sales with significant growth in e-commerce:

Through the first four weeks of Q2, our comparable store sales are approximately in-line with the prior year, and our DIY omni-channel business is growing double-digits, significantly outperforming professional. – Q1 2020 call

There are other potential tailwinds brewing for AAP. For example, if the downward pressure on oil prices persists, that could translate into lower gas prices, encouraging more trips and increasing miles driven. The way people are going to behave after COVID-19 might also affect miles driven. For those that have the choice between using public transportation and driving, the latter might become the preferred option. Finally, there is the well-known view that in times of recession, consumers would choose to repair their cars instead of opting for a new purchase.

READ ALSO  Ghislaine Maxwell Arrested, May Be Sent To Same Jail Where Epstein 'Killed Himself'

We like the turnaround story at AAP and believe management was on a good path to finally integrate the huge acquisition of GPI. Revenues were starting to come back, having a positive impact on gross and operating margins. However, COVID-19 is putting positive business momentum on a temporary hold.

With shares rebounding significantly, almost eliminating the market sell-off in March, investors might be focusing on the long-term future of the company, which, as stated previously, looks quite favorable. That is also reflected in NTM EBITDA multiples, trading at high levels, indicating high levels of optimism from the market towards AAP: 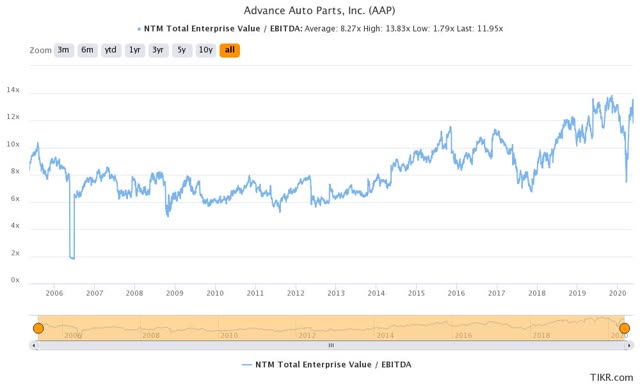 We believe shares in AAP to be fairly valued. The stocks could get a boost if management shows expanding margins and the sustainability of them. That would happen once revenue growth gets back to normal levels, which we estimate it to be in the 2-3% range.