Unlike most cannabis multi-state operators (MSOs), Acreage Holdings (OTCQX:ACRGF) hasn’t rallied towards new highs this year. The company has a pending merger to be acquired by Canopy Growth (CGC) at much higher prices. Joe Biden winning the U.S. Presidential election should be more positive for the MSO obtaining a triggering event to close the merger, making the stock very intriguing here.

The biggest issue with an investment in Acreage since the original deal with Canopy Growth was the company was hamstrung in investing for a potential standalone future. The deal needs the U.S. federal government to pass legislation allowing federal permissibility of cannabis in order for the merger to close since a stock listed on a major U.S. stock exchange can’t own a business that is illegal at the federal level.

Joe Biden has established a cannabis agenda of rescheduling marijuana as a schedule II drug. In addition, the plan includes an aggressive push in legalizing medical cannabis at the federal level and making pot permissible at the state level. His stance was officially updated via this post on Twitter only a week ago.

Regardless, Acreage has improving fundamentals that reduce the risk of owning the stock. Despite most MSOs rallying to multi-year highs, this stock trades at the lows due to the weak fundamentals that required the re-pricing of the deal discussed below.

For Q3, Acreage actually reported that pro-forma revenues jumped to $48.7 million in the quarter. The ongoing EBITDA losses are a primary focus of the company as the MSO quickly shifts toward eliminating those losses, setting Acreage up for survival until a triggering event occurs.

In addition, Acreage only recently launched adult-use sales in Massachusetts on November 10 and opened a second store in Illinois on September 28. The company now owns or manages 29 operational dispensaries in 11 states.

The main issue with the MSO is the lack of scale in any individual state. Florida and Massachusetts have only one open dispensary while Illinois and New Jersey only have two stores. Even the biggest states such as New York and Ohio only have four and five dispensaries, respectively.

Wide coverage of multiple states was probably attractive to Canopy Growth looking for scale, but the spread-out operations don’t help margins and hence profits for Acreage in the meantime.

Back in June, Canopy Growth and Acreage amended the plan of arrangement for the merger. The amendment changes the terms of the agreement to a complicated mix of fixed and floating shares.

Investors need to realize that the original valuation of $5.49 presented in the documents was arrived at when Canopy Growth traded at only $16.71. The stock is now rounded up to $26.87.

The updated value is as follows: 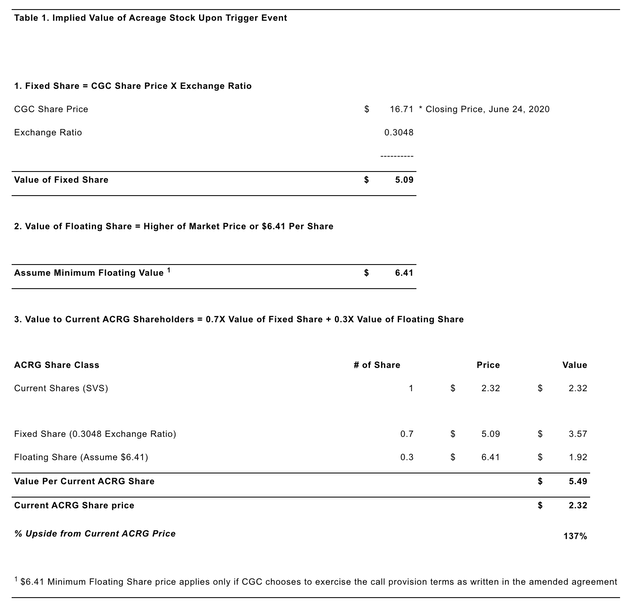 On the closing of the deal, Acreage shares would have upside of 176% from the current price. The market is clearly worried the triggering event won’t occur fast enough to prevent another amendment or leave shareholders out in the cold as a standalone.

The company is heavily indebted so risk does exist in the event cannabis is never approved at the federal level in the U.S. A move that now appears highly unlikely, but anything is possible when it comes to politics.

The key investor takeaway is that Acreage continues to make progress on becoming a viable standalone MSO. As the company reaches this point, the stock becomes a cheap way to play federal approval of cannabis and obtain shares in Canopy Growth far below the current price. As the rest of the MSOs rally, Acreage could easily become the cheapest way to play federal cannabis approval.

If you’d like to learn more about how to best position yourself in undervalued stocks mispriced by the market, consider joining Out Fox The Street.

The service offers a model portfolio, daily updates, trade alerts and real-time chat. Sign up now for a risk-free, 2-week trial to start finding the next stock with the potential to double and triple in the next few years.

READ ALSO  U.S. Shale Could Be The Biggest Winner Of The Latest OPEC Cuts