Acceleron Looks To Next Therapy After Reblozyl Launch (NASDAQ:XLRN)

Acceleron (XLRN) reported a strong second quarter of 2020 on August 6. Revenue was $39.8 million, up sequentially from $4.3 million and up from the year-earlier figure of $27.7 million. Of that, Reblozyl royalty revenue in Q2 was $11.1 million, up sequentially from $1.5 million. Reblozyl (luspatercept) was first approved by the FDA for treatment of anemia related to beta thalassemia in late Q4 2019. The royalties are paid to Acceleron by Bristol-Myers Squibb (BMY).

Reblozyl royalty revenue has transformed Acceleron from a clinical-stage company to a commercial-stage pharmaceutical company. Looking at the stock price, the big bump came in late January 2020. From a base near $50 per share, since January the stock has mainly stayed in the $90-110 range. While it may be some time before a new event propels the stock significantly higher, I believe it is attractive below $110 a share for longer-term investors, based on potential Reblozyl revenue and the development of the rest of the pipeline.

Reblozyl is used to treat anemia associated with certain serious blood disorders. It is a recombinant fusion protein that binds several TGF-beta superfamily ligands, thereby diminishing Smad2/3 signaling. More simply, it helps red blood cells to mature despite disease-driven failures in erythropoiesis. Take beta thalassemia. Reblozyl is not a cure for the disease, which is caused by mutations in the genes needed to develop hemoglobin. However, it does (when it works) make the red blood cells functional, which allows patients to live without, or with less, blood transfusion. It is a rare disease, with perhaps about 1,000 patients in the United States, which contributed to Q1 royalties reaching only $1.5 million.

Reblozyl was developed by Acceleron, then partnered with Celgene, which is now a part of Bristol-Myers Squibb. Aside from milestones and research reimbursements, royalties will be in the low- to mid-20% range. For Q2, it worked out to 20.2%. Bristol-Myers has global rights. The EU approved Reblozyl for beta thalassemia and MDS in June 2020. As usual, the rest of the world will see slower introductions.

In April, the FDA approved Reblozyl for MDS (myelodysplastic syndromes), a group of cancers that prevent maturation of blood cells and can be fatal or lead to acute myeloid leukemia. Again, it is for anemias associated with the disease. There, it will compete with ESAs (erythropoiesis-stimulating agents), which include Amgen’s (AMGN) Epogen, which had Q2 2020 sales of $166 million, down 28% y/y because of biosimilar competition. Note, Reblozyl was approved for the treatment of anemia failing an ESA and requiring 2 or more red blood cell units over 8 weeks in adult patients with very low- to intermediate-risk myelodysplastic syndromes or with myelodysplastic or myeloproliferative neoplasm, with ring sideroblasts. Thus, it is currently for use after ESAs fail, and not for all forms of MDS. Nevertheless, the potential number of MDS patients under the label is far larger than the potential beta thalassemia patients. Estimated new cases of MDS in the United States range from about 10,000 to 20,000 per year. Acceleron estimates Reblozyl sales by BMY in these first two indications could reach $2 billion annually, resulting in about $400 million per year in royalties. However, that depends on success in the marketplace, which is not guaranteed.

Ongoing trials could extend the label for Reblozyl. It could also be extended to other anemias that result from red blood cells failing to mature, with a trial for myelofibrosis expected to start relatively soon. This slide provides a summary: 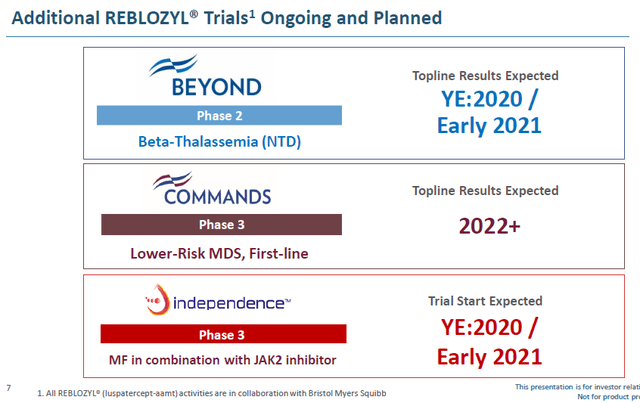 Because of the recent FDA approval in MDS and the June approvals in Europe, it is fair to say the revenue ramp is just getting started. If the first-line MDS Phase 3 trial comes in with positive results, that could greatly increase the revenue potential in the 2023 time frame.

Aside from seeing how well Reblozyl revenue and royalties play out in the real world, the next major potential stock price mover is sotatercept for PAH (pulmonary arterial hypertension). This has been granted breakthrough therapy designation by the FDA and Prime designation by the EMA (European Medicines Agency). In June 2020, Acceleron reported positive Phase 2 results at the meeting of the American Thoracic Society. A second Phase 2 trial is expected to generate preliminary results in the first half of 2021. A Phase 3 trial is already planned and could start before the end of 2020.

Since Acceleron retains full rights to sotatercept and PAH has a high unmet medical need, it could be a major revenue generator, if approved. The company will hold an investor and analyst seminar in October to discuss the Phase 3 trial design and timeline.

We know little about what Acceleron may have in preclinical development. The only other known piece of the pipeline is ACE-1334, which is a bit of a mystery. On the Q1 2020 conference call, ACE-1334 was said to be in a Phase 1 study of healthy volunteers, but the disease indication was withheld. We do know it targets TGF-betas 1 and 3 and the indication is a pulmonary disease. Hopefully we will know more soon, with the company promising more information in 2021.

In Q4 2019, Acceleron signed a collaboration and license agreement with Fulcrum Therapeutics (FULC) to identify small molecules to modulate specific pathways associated with a targeted pulmonary disease indication. No details on the actual target have been released yet.

Given the centrality of the TGF-beta superfamily in cell metabolism and the company’s expertise, I expect the platform to continue to produce novel therapies. It is not possible to place any specific value on it, however, while Acceleron keeps a veil on it.

The net loss for Q2 2020 was $18.5 million, leaving a cash balance of $390 million. Revenue in the quarter included a $25 million milestone payment, so I expect losses to increase for a while until royalty revenue ramps significantly. In July, Acceleron added $493 million in cash from a public stock offering. It says that is enough to operate into 2021, but unless expenses ramp significantly, that should be enough to reach well into 2022.

As usual, there are a number of risks involved in buying Acceleron stock, but the largest single risk – that of the FDA rejecting Reblozyl for commercial sales – has been eliminated. There are risks in the commercial marketing of Reblozyl, and of course, good Phase 2 results with sotatercept do not guarantee good Phase 3 results or FDA approval for the drug.

At the end of day on Wednesday, August 26, 2020, Acceleron had a market capitalization of $5.5 billion. That is a lot of money based on Q2 royalty revenue of $11.1 million. Clearly, investors are assuming revenue will continue to ramp and at some point Acceleron can reach profitability. As revenue ramps, I expect expenses will ramp too, as biotechnology growth companies are more about expanding the pipeline and generating more commercial drugs than they are about generating profits. Sotatercept looks good, but first, a successful Phase 3 trial needs to be conducted. I believe Acceleron is worth accumulating at this level, but I would also like to know more about ACE-1334 and anything in preclinical development. That has not yet been communicated to investors by company management.

Disclosure: I am/we are long XLRN, BMY. I wrote this article myself, and it expresses my own opinions. I am not receiving compensation for it (other than from Seeking Alpha). I have no business relationship with any company whose stock is mentioned in this article.