As my speculative portfolio crumbles in light of COVID-19, I am periodically checking in on those candidates which I retain to evaluate their rebound prospects. This is my evaluation of Acadia (ACAD).

NUPLAZID revenues look to remain strong as 2020 unfolds, however the COVID-19 virus may scramble the picture to some extent

Acadia’s sole FDA-approved therapy, NUPLAZID in the treatment of hallucinations and delusions associated with Parkinson’s Disease Psychosis [PDP] was approved in 2016. With the exception of a brief lull traceable to a muckraking CNN article during Q2 2018, Acadia’s NUPLAZID revenues in this indication have risen on a reliable Q/Q basis.

The excerpt below from Acadia’s Q4 2019 earnings slide deck illustrates how these have grown on a Y/Y basis since approval. 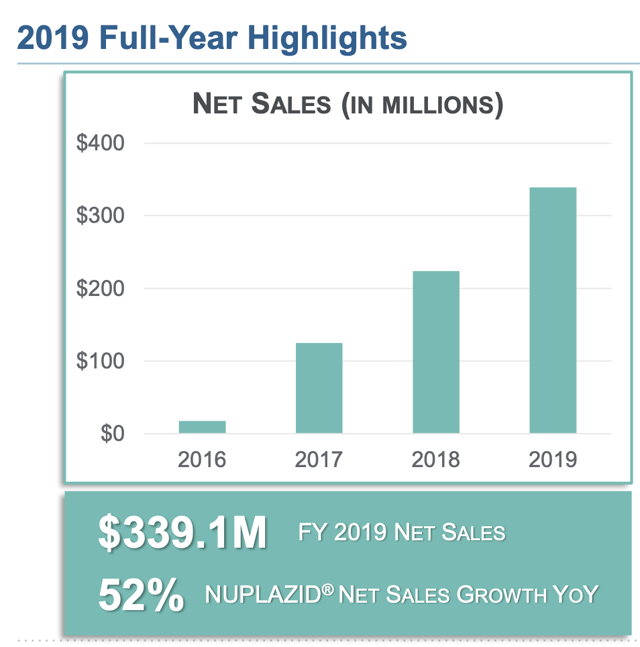 During Acadia’s earnings call for Q4 2019, it issued 2020 net sales guidance per the slide excerpt below. The slide deck is dated 2/26/20, several weeks prior to 3/11/20, the date when the WHO labelled the coronavirus outbreak a pandemic. In late February, the full extent of the United States’ disruption was yet to unfold.

Accordingly, I do not regard the guidance as fully reflecting NUPLAZID’S likely sales trajectory for the balance of the year. NUPLAZID sales are not automatic, rather they reflect ongoing interactions between Acadia representatives and patients through their representatives. During Acadia’s Q4 2019 earnings call, EVP and CCO Yang described such ongoing activity as:

We’ve become much more sophisticated in our approach to the market meeting the physicians and customers where they are.

And so many of the roles or the bulk of those roles are what I would call traditional blocking and tackling demand generating, sales representatives both in long term care and the community, but we do have a very sophisticated group of people that help with patient pull through. They work with the offices to make sure of the product. We have a center of excellence team that works with the academic teaching hospitals.

The extent to which sales are negatively impacted by social distancing and general disruption is unknowable. Judging by my own mental gyrations associated with the pandemic, I would expect that many patients would find extra motivation for starting and staying on NUPLAZID therapy.

Suffice it to say that guidances issued prior to actual full disruptions do not strike me as reliable, whether for NUPLAZID or anything else.

Acadia’s expenses are discouragingly high and seem to grow with unnerving regularity, yet its overall financial health is improving

Acadia’s product revenue growth as shown above is stellar. It is also essential. Acadia has an expense structure, both SG&A and R&D, that continues to grow aggressively; all the while its share count is doing the same.

Nonetheless, as shown by Acadia’s Financial Highlights graphic below, Acadia’s NUPLAZID revenues growth is sufficient to keep its EPS growing at 18%. 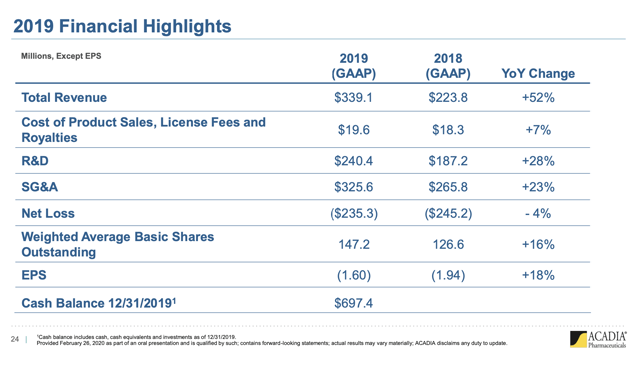 When it comes to liquidity, Acadia boasts a cash balance of $697.4 million. Its cash flow statement at p.F-6 of its latest 10-K sheds interesting light on this balance. Its line for net cash used in operating activities has been declining nicely as excerpted below for years 2019, 2018 and 2017:

The liability section of Acadia’s balance sheet is nearly pristine. It shows no debt and capital leases of a mere $6.4 million. With a cash burn of ~$151 million for 2019, its cash on hand should be sufficient for it to continue operating for several years without new raises should it elect to do so.

Acadia’s pipeline is trim. It features its FDA-approved NUPLAZID (pimavanserin) in the treatment of PDP. As shown below from its Q4 2020 slide deck, it also included three other indications for pimavanserin, dementia-related psychosis [DRP], major depressive disorder [MDD] and negative symptoms of schizophrenia. Its lone pipeline asset which fails to include pimavanserin is its Trofinetide in the treatment of Rett Syndrome. 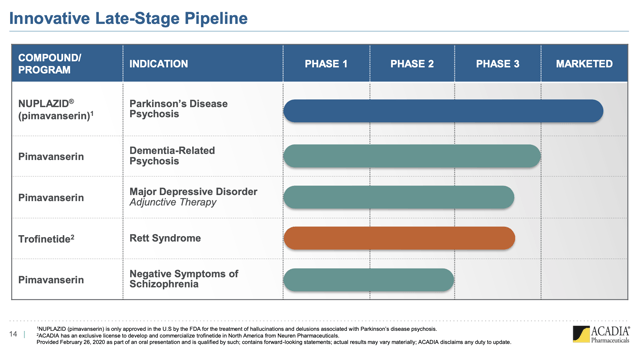 While admittedly trim, Acadia’s pipeline is high powered. Acadia is targeting its lead therapy behind NUPLAZID, pimavanserin in the treatment of DRP, for sNDA submission later this year with a potential approval this year as shown by the Q4 2020 earnings slide below: 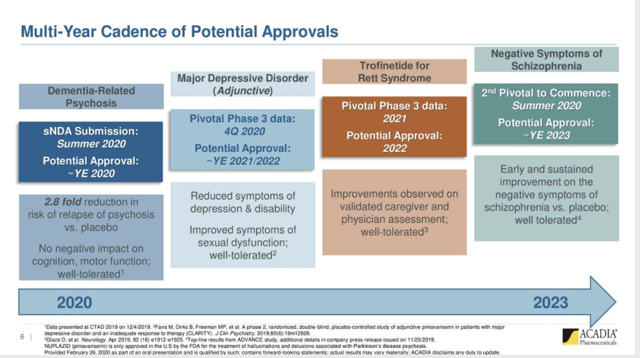 Talk about a game-changer. An article titled “Drug Might Be Safer For Dementia Psychosis” in WebMD, points to pimavanserin in the treatment of DRP as a much-needed therapy for a condition that traumatizes frail elderly patients and can be the trigger that sends them into long-term care.

The article notes how standard antipsychotics used to treat this condition are unsatisfactory for compelling reasons. They do not work very well, they have serious side effects, and they impact the patient’s balance creating risk of falls. Pimavanserin offers significant improvement in each of these.

Of course, the “not approved for” DRP will have to go by the wayside if Acadia’s upcoming sNDA is successful. Such a deletion should burnish pimavanserin’s safety profile, however as discussed below, pimavanserin may still face safety concerns as the future plays out.

In terms of market size an approval for pimavanserin in the treatment of DRP would expand its potential market reach by a factor of ten, per company presentation below, with more to come should it achieve additional approvals: 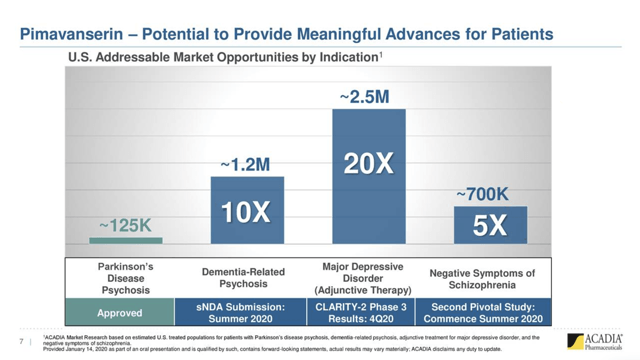 Approval of pimavanserin in the treatment of DRP places it in potential mega-blockbuster territory. Consider the midpoint of the $0.45 billion guidance for NUPLAZID revenues in 2020. Add any multiplier to that and Acadia’s prospects go from bright to exceptional.

The current market seems to punish those who dare to purchase favorites that they find in the bargain bin. Biotech has been something of a favored sector per the chart below, however, it has not escaped from the overall gloom.

Accordingly, I have been hesitant about making stock investments as I shelter in place. Perhaps I am carrying social distancing too far, but I am keeping my distance from stocks as I do from people.

I note that Acadia has characteristics which help protect it from the worst pandemic risks. It should not have to raise funds in the near term. It plans to submit its sNDA for DRP without any need for additional clinical trials. Still yet, headquartered in San Diego, California, it is subject to shelter in place orders. While this doesn’t mean that its DRP sNDA filing will be delayed; how can it not render such a delay far more likely?

Another point that bears watching with Acadia is competition from other drug companies that are working hard to get their therapies approved. I have not been able to pin down any specific therapy waiting in the wings which poses a particular risk to pimavanserin in the treatment of DRP.

ClinicalTrials.gov is no help whatsoever. There are many different flavors of dementia that may give rise to psychosis. Fortune Business Insights pegs the market for antipsychotics as exceeding $20 billion by 2026. It notes that there are three generations of therapies.

It lists eleven named companies (this doesn’t include Acadia) as antipsychotic drug players, with a catchall for “other prominent players.” It lists trends in the market which include “advances in R&D leading to significant reduction of extrapyramidal motor control disabilities.” This trend plays directly to pimavanserin’s strong suit.

Despite its manifest advantages, safety concerns are likely to dog pimavanserin from time to time. Back in 2018, Acadia got temporarily coldcocked by muckraking CNN articles. The FDA looked into the matter and issued an analysis substantially putting the matter to rest.

In researching the matter, I encountered an article dated 4/1/19 titled “Questions Remain About Safety of Parkinson Disease Psychosis Drug.” Apparently CNN is still anxious despite the FDA analysis. As noted in the article:

The nonprofit Institute for Safe Medication Practices (ISMP) called for Nuplazid to have stronger warnings on its label for patients and their families, CNN reported.

…documents from the FDA evaluation of Nuplazid fail to answer a number of questions about the drug’s safety and efficacy. As a result, the “reassurance” from the FDA was not warranted, according to the medical researchers, safety experts, and doctors who wrote the report.

NUPLAZID’S label is definitely an advantage for it, however, the longer it exists in the marketplace, the more its actual track record will be available to guide patients and their physicians. Accordingly, its label will diminish in importance.

Acadia has sorely tempted me to increase my stake in it. Its potential near-term FDA approval for pimavanserin in the treatment of DRP is just too enticing. I like its chances for approval as highlighted by its breakthrough designation, the early termination of its Harmony trial for efficacy and its high level of patient need.

Despite the attraction, I am holding firm with my existing position. Acadia has been bouncing around with the rest of the market; on some days, COVID-19 concerns take control of prices, per the stock chart above. Should it hit an overwrought price challenge because of COVID-19, I may re-examine my stance.

Acadia’s market cap of nearly $6 billion on 3/25/20 as I write, suggests to me that investors are pricing in revenues that likely exceed anything that NUPLAZID in its currently approved indication is likely to generate. Under such a reckoning Acadia is a strong hold, not yet a buy

If Acadia corrals FDA approval for pimavanserin for DRP, everything changes, the sky is the limit. Under such a scenario, Acadia might be irresistible to one or more of the antipsychotic therapy heavy-hitters, companies including notables such as Eli Lilly and Company (LLY), AstraZeneca (AZN), Pfizer (PFE) and Bristol-Myers Squibb (BMY).

Disclosure: I am/we are long ACAD. I wrote this article myself, and it expresses my own opinions. I am not receiving compensation for it (other than from Seeking Alpha). I have no business relationship with any company whose stock is mentioned in this article.

Additional disclosure: I may buy or sell shares in ACAD over the next 72 hours.