The importance of interest rates

Whether interest rates are about to change has great importance to us as investors. Clearly, it’s vital to us if we’re interested in bonds. But the effects upon equity values are substantial as well.

So, we’re interested in changes in interest rates as announced by the Fed. In terms of macroeconomic investing much of last year was spent mulling over how the Fed was going to do so. If the economy was slowing would they lower rates? What about the inflation rate – specifically, the core PCE which is what the Fed targets – hitting its target or not? What did that mean for the amount of room there was for action?

Near all of this is now moot. For we’re most unlikely to be getting any changes in interest rates any time soon.

We’ve the latest from the Open Market Committee including their projections for inflation, growth and so on. There is bad news in there, they’re gloomier about growth than most thought they would be. That’s why the market is down as I write. But they also put to bed the idea that monetary policy is going to change any time in the near future. That’s something we can forget about for the moment therefore.

You can see the projections here. This is, for me, the interesting bit: 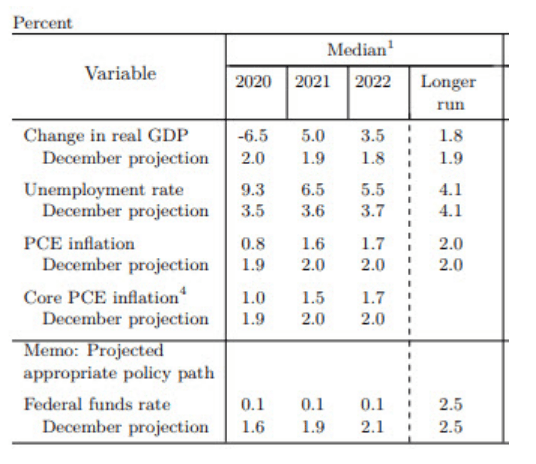 (Projections from the Federal Reserve)

Or, perhaps, negative growth and shrinkage in GDP this year. I do think that’s an over estimate of what it’s going to be. I think that the fall in this quarter is going to be hugely larger than that on an annualised basis but I expect the recovery to be rather more rapid than most others – including the Fed – do.

There’s little I can point to as proof of my contention. It is somewhere between prejudice and observation of other substantial GDP declines, no more than that. I just do think that where we know the reason for a recession then once that reason is dealt with recovery is swift. For the 1920 recession – a very deep one – for example, by 1921 it was difficult to see that it had happened.

That also means that I think growth in 2021 will be lower than the Fed does as more of the recovery will have happened by then. Thus, also and obviously enough, I think unemployment will fall faster than they do. Logically, to believe that any one of the three will happen faster means that all three will.

The Fed is assuming – predicting if we like – that inflation isn’t going to rear its ugly head any time soon. That makes good sense but we’ve substantially raised the risk that it will appear sometime, even if not soon. Printing trillion upon trillion of new money is going to do that unless we have a mechanism of drawing it back out of the economy at some point. Fortunately we do. The Fed can, if it sees inflation rising, just run down the balance sheet at whatever rate they think right. That will remove that new QE money from the economy.

This brings us to interest rates, The Fed’s target is full employment consistent with a 2% inflation rate. They use PVE core as their definition of inflation that they target. As we can see they don’t think it will even reach target, let alone exceed it, for the next couple of years. We can thus put aside concerns of rising interest rates for the next couple of years.

The true importance here is that Fed policy, if reality follows the above path, isn’t going to change. what will change Fed policy is variance from that path laid out above. So, we’d like to know what to look for to see what might change the Fed’s future actions.

On the downside, well, there’s not all that much more that monetary policy can do. Sure, they can do yet more QE but we do, eventually, get to a point where even that is pushing on a string. An effort and not all that useful. Fiscal policy is going to have much more effect than monetary if the economic revival doesn’t turn up on time or at speed.

So, the concern is the upside. The upside of inflation that is.

We have, after all, just expanded the narrow money supply by an amazingly large amount. The V in MV = PQ is indeed very low now, the relationship has almost certainly changed entirely. But while the result of MV with V at any particular rate has changed that there is a relationship hasn’t. There is going to be inflation from this at some point.

We do, fortunately, have a method of dealing with that too. The Fed simply sells back those bonds into the market, collects the money and cancels it. As it was doing, shrinking the balance sheet.

So, what should we be looking for?

So, that’s the thing to be looking at going forward. We have various proxies, the CPI (which is near always some amount above PCE) and so on but that’s the thing to be looking at, the inflation rate. If that starts rising then we’ll see a change in Fed policy. My expectation is that it’ll be a shrinking of the balance sheet first – unlike last time when they put up interest rates first – but action there will be if inflation rises.

I’m less than enamoured with the entire subject of macroeconomics. It always appears to be too much math and not enough consideration of people for me, unlike microeconomics. However, what people believe about macroeconomics is what determines macroeconomic policy so we’ve got to try to be up with it.

The Fed’s not going to lower interest rates, not from here, as it wouldn’t have any greatly useful effect. They’re also not going to raise them, not until they can see the whites of inflation’s eyes. So, that’s what we should be using as our warning sign, even a hint of inflation being higher than the Fed currently thinks it will be.

In one sense this is all terribly simple. We just don’t have to worry about changes in Fed policy for the next year or two. But beyond that we now have that guide to when we should start thinking about it again. Any sign of inflation and a change in monetary policy is back as an option. Until then we can put the issue to bed.