A Winner When Britain Is Moving Again: Stagecoach (OTCMKTS:SAGKF)

A Winner when Britain is Moving Again: Stagecoach

Stagecoach (SAGKF) is well-positioned for a medium-term recovery to business levels close to what they were previously, which should produce a solid annual profit. That means it is significantly undervalued at today’s price.

Stagecoach is a British-based bus and coach company. It previously had other operations which weren’t rewarding: massively overpaying for Coach USA and ultimately ill-fated involvement in railways in the U.K. The company has returned to its core for now and is the biggest UK bus and coach operator with around 8,400 buses and coaches. It runs buses in cities and rural areas across the U.K. It also runs inter-city coach service “Megabus” in the U.K. and has a joint venture for Scotland’s leading intercity bus service “Citylink”.

Stagecoach has been around for four decades and has deep expertise in bus and coach services, although the key founding figures have largely wound down their involvement from the start of this year, with Sir Brian Souter retaining a role as non-executive director. Notwithstanding that, there is deep organisational expertise in running U.K. bus operations. A large part of its business is running bus routes, which has been in existence for decades.

My investment hypothesis is predicated on management sticking to its knitting in U.K. buses. Management has never been able to replicate its success on a durable basis outside the U.K. or in national rail, so if it decides to expand in those directions again, it would be a red flag. U.K. bus operations throw off substantial cash, and this would much better be returned to shareholders rather than gambled on bad bets like Coach USA.

Bus Ridership is in Long-Term Decline

Bus ridership in the U.K. has been in long-term decline. It basically halved between 1970 and 2000. Since then, it has started to show growth but not consistently, and nowhere near its historical level. The most recent peak was over a decade ago, since when local authorities have had their finances straitened, and so, in many cases, have withdrawn subsidies for local bus routes. So we may characterize this as a mature market, whether in decline or stasis. However, it is still a sizeable market. In many areas, buses will retain their position for decades to come, as there is no viable transport alternative for swathes of citizens. 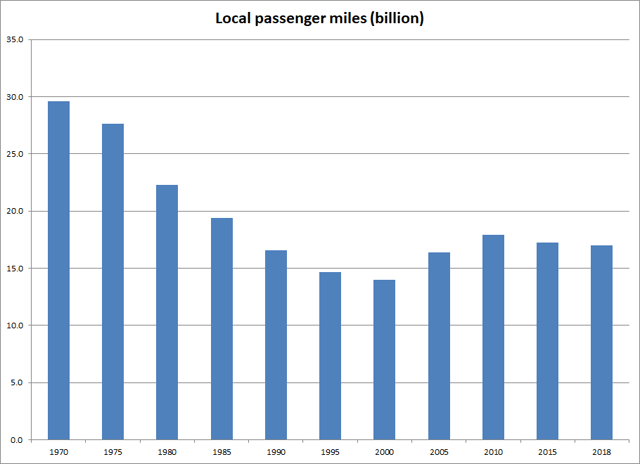 I suspect that regional bus ridership in the U.K. is not suffering the same decline. It offers substantial cost savings versus rail, and the coaches are much better than they used to be. Anecdotally, the last time I tried to buy a Megabus ticket from London to Glasgow, there were no seats available on the next few buses. Both Megabus and National Express have helped sustain and, I suspect, grow the intercity coach market with fleet upgrades and infrastructure improvement at key coach stations.

It’s helpful to understand how Stagecoach makes money. It’s not as simple as passengers paying fares. Rural areas often subsidise bus services they regard as vital to connectivity regardless of ridership. According to the company, “Around 33% of our regional bus revenue is ordinarily receivable from public authorities in respect of concessionary revenue for passengers who receive free or discounted travel, revenue to support socially desirable services and revenue for operating school services.” In London, meanwhile, “The London bus business is paid by Transport for London to operate specified bus services and the revenue of the business is not directly affected by short-term changes in passenger numbers.” Note that margins on the much larger regional business are higher than the London ones:

So basically, when people stop riding buses, Stagecoach loses some fares but will often still receive some revenue regardless from local authorities. That matters more than usual this year in the context of the COVID-19 lockdown.

Stagecoach is a Declining but Reliable Money-Making Franchise

As the largest operator in the declining U.K. bus market, Stagecoach’s core business is also in long-term decline. In addition, in the past several years, it had wound down its operation in U.K. rail franchises. This has cut free cash flow significantly.

Nonetheless, the company has been and continues to be cash-generative. 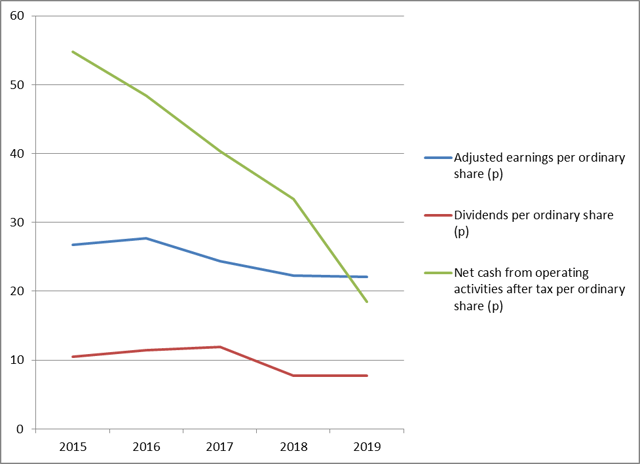 Graph compiled by author with statistics from company website 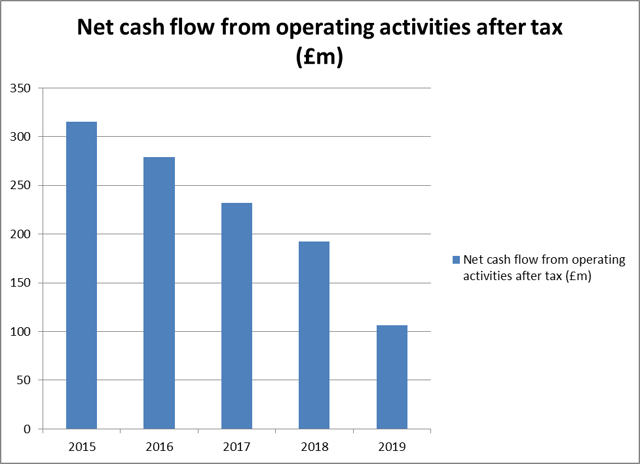 Graph compiled by author with statistics from company website

Stagecoach issued a trading update on 23rd March. It took a number of steps to reduce the impact on the business of the COVID-19 lockdown, including cutting non-essential capex, discretionary spend and recruitment. It did some refinancing and also stated that “(b)ased on existing contractual arrangements and discussions with government bodies, we expect to maintain a significant proportion of our revenue during the downturn”.

The company said that it was unlikely to pay any further dividends for the current financial year.

The lockdown has seen a reduction in bus services and must have seen a significant reduction in ridership. Before the lockdown, however, ridership was still running at around 60% of normal rates, and services were cut to something more akin to Sunday service, also roughly a 40% cut. The company made the decline in ridership sound manageable. At the cost level, some of the business impact could be mitigated by using the government’s scheme to cover 80% of wages for some staff. Some staff continued to work providing a reduced timetable.

Stagecoach announced on 26th May a phased return of services in England. Likely the rest of the U.K. will follow in short order.

The real question now is what will the transport environment look like as the U.K. comes out of lockdown and beyond? My thesis is: basically fine. More specifically:

So, while Stagecoach’s business will take a hit in terms of ridership in the coming year, it feels more likely to be an annoyance rather than a mortal threat.

Last week, the owner of significant U.K. coach operators Shearings and National Holidays went into administration, hot on the heels of the closure of the coach holiday business of Scottish tourism operator Urquharts. It seems relevant to note that these were tourism operators, whereas Stagecoach is operating basic transportation services. Demand for that is more robust and is also more politically sensitive.

The Bear Case Against Stagecoach

Set against the above, there are some additional factors which mitigate my enthusiasm for Stagecoach:

Calculating a Fair Price for Stagecoach

The prior dividend of 7.7p per year cost the company about £44 million annually. It covered this more than two times out of earnings. Stagecoach did reduce dividends after exiting the U.K rail business, but if we take 7.7p as the new normal.

Stagecoach’s historical yield was about 3%, increasing to around 5-6% between 2015 and 2017. It hovered there afterwards, but this year, the share price has fallen dramatically.

However, if the dividend restarts at the end of 2020 or start of 2021 at its former rate, the current share price would represent a 13% yield – slightly more than twice its historical norm. If it represented a yield of 5-6%, the share price would need to be somewhere in the range of 138p-154p.

There are some unknowns between here and then, but given its proven long-term skill at cash generation, I expect Stagecoach to return its business to something approximating normal health in 2021. From this point, then, I’d expect today’s 64p share price to increase at least 115% at some point in the coming 12-18 months to a minimum of 138p.

Stagecoach faces significant headwinds and unknown future demand. But its revenue model provides some insulation, while the essential nature of its business means long-term demand destruction following the lockdown will likely be limited.

I expect that it will hit 138p in the coming 12-18 months, a premium of 115% from Tuesday’s closing price. The key factors in the company’s revival will include uptake of bus transport in the months after the U.K. ends its lockdown, and whether any other shocks occur to demand, such as a second lockdown. Stagecoach is due to provide guidance in interim results at the end of June, which should confirm (or not) my thesis.

Disclosure: I am/we are long SAGKF. I wrote this article myself, and it expresses my own opinions. I am not receiving compensation for it (other than from Seeking Alpha). I have no business relationship with any company whose stock is mentioned in this article.