A Tough Quarter For Heineken As Bar Closings Bite (OTCMKTS:HEINY)

Heineken (OTCQX:HEINY) (OTCQX:HKHHF) surprised investors on Thursday by publishing preliminary highlights of its H1 earnings. The market reaction was negative because it looks like Heineken is underperforming market expectations that were partly set by early data from a peer. I believe that there is more pain to come for Heineken and that its 12.5% loss so far this year is justified.

Most significantly, revenue declined by 16.4% on 13.4% lower volumes in H1. In Q1, the company saw a volume decline of just 3.9%. Mathematically, this means that consolidated volume was down 22% in the second quarter. This is a poor result that not everybody must have expected after Heineken’s large European peer Carlsberg (OTCPK:CABGY) posted a volume decline of only 7.8% in Q2. Carlsberg’s revenue was down by just 11.6% for H1, and as with volume, Heineken was outperforming on revenue in Q1. Adding insult to injury, Carlsberg sees an organic operating profit decline of just 8.9% in H1, while Heineken wrote about a drop of 52.5%.

The differences are so stark that they need some explanation. I discussed the reasons in detail in this earlier PRO Income article, but Heineken finally gave similar hints in its release. Specifically, the company mentioned its strong position in on-trade channels. On-trade are pubs, sports events, and basically, any place where you can buy a beer and are expected to drink it in the same location. This is a contrast with off-trade, which consists mostly of liquor stores and supermarkets for the brewers.

Another element that troubled Heineken is its geographic exposure. South Africa and Mexico are important markets for the company and alcohol sales were forbidden in South Africa and large parts of Mexico during most of the second quarter. Mexico is an especially important market to Heineken, as more than 10% of its group profits were made there in 2019. Also, when we turn to Asia Pacific, Heineken is hurt by its under-exposure to China. Data from Carlsberg tells us that sales in China picked up strongly in Q2 after a slump in Q1.

An element that is set to bite in Q3 is tourism. Heineken is over-represented in countries that are net receivers of international tourism. These places include Latin America, Southeast Asia, Africa, and Southern Europe. The table below shows tourism for large beer markets and/or markets in which Heineken has a large market share.

Source: author’s own calculations, World Tourism Organization for outbound and inbound data. The Netherlands is the home market of Heineken.

To put the table above into some context, the chart below shows the sales and volume mix of Heineken in 2019. 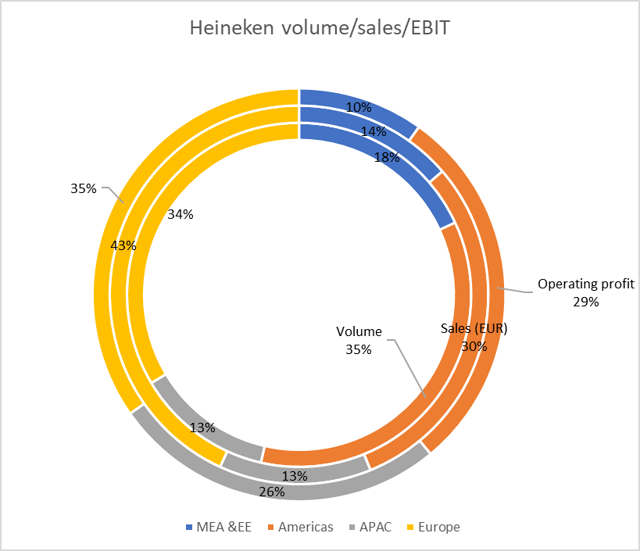 A point I would like to reinforce is that Heineken is geared towards the Southern part of Western Europe, which is why I showed Spain and Italy in the table above. A factor I also took into consideration is the size of the country, the beer consumption per capita, and Heineken’s share. For example, while France has the same population as the UK, its beer consumption is half that of the UK. Germany, on the other hand, is the largest beer market of Europe, but like most international brands, Heineken has a very small market share there.

Heineken is very small in the Nordics, and even its UK presence should be seen in context. A lot of Heineken’s UK volume is on-trade. Due to its pub culture, the UK is a big on-trade market (responsible for 46% of beer sales), and Heineken is big in UK on-trade because of its large network of owned pubs. The company acquired a large number of these pubs a few years back.

Aside from company-specific factors, the industry is at a risk of suffering from renewed lockdowns and pain in the on-trade channel. The quarterly results have shown us that off-trade does not compensate on-trade losses in full.

A problem for brewers is that social distancing and facial masks are effective and popular measures to stem the spread of the coronavirus, but these measures don’t combine well with drinking alcoholic beverages in groups. So, it shouldn’t come as a surprise that closing bars to stop the virus is backed by science, in the words of a July Associated Press article. From a policy standpoint, it is also reasonable to assume that closing bars is a relatively easy choice compared to shutting down larger parts of the economy.

The chart below shows the development of COVID-19 in the 10 most affected countries to give an idea of where the pandemic is headed. 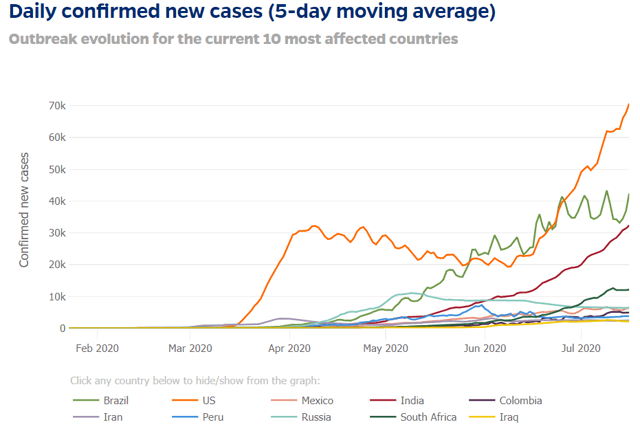 Also, when looking at the data from a higher level, the numbers look to be accelerating after an initial slowdown in May. Both Asia and the Americas show a notable uptick in cases, while Europe stabilized.

While the path of the current pandemic is impossible to predict, we do know that the Spanish flu had a second wave of cases in the fall. UK virologists pointed to the high likelihood of a second wave in winter as coronaviruses have proven to spread more readily in colder seasons.

Heineken said in its press release that it sees signs of recovery. Investors will likely take this into account and may underestimate continued hits to Heineken’s sales and profitability in the second half.

In my view, the table is being set for a second wave of infections as many restrictions are eased – at least in Europe – and people’s sense of urgency is abating. A second wave will be bad for both on-trade sales of beer as well as tourism, and this will hurt Heineken hard.

The closure of on-trade channels to which Heineken is particularly exposed has hurt its sales badly in Q2, perhaps surprisingly so compared to Q1. Meanwhile, the stock has recovered a bit on the back of relaxing restrictions in many places. However, there is a severe risk that the virus will return in many markets and that bars will be closed again. Because of these possible negative catalysts remaining for this year, it does not look like the best time for investors to bet on Heineken as it is particularly exposed to on-trade and tourism.

Previous PostTop HHS official says ‘most’ of the coronavirus transmission is from asymptomatic peopleNext PostHydroxychloroquine: The One Chart You Need To See