U.S. West Texas Intermediate and international-benchmark Brent crude oil futures are in a position to close higher for the week after starting the week with a slightly bearish tone. Helping to underpin prices this week was a surprise decline in U.S. inventories and optimism about more efforts to support prices by OPEC and its allies. Gains were likely capped by gloomy growth forecasts over the outlook for global demand.

At the end of the week, traders continued to react to Wednesday’s government weekly inventory report that showed an unexpected drop in supply.

According to the U.S. Energy Information Administration (EIA), crude inventories fell 1.7 million barrels in the week ended October 18, compared with analysts’ expectations for a 2.2 million barrel build. This was a stark contrast with earlier inventory data released by industry group the American Petroleum Institute (API), which showed a build of 4.5 million barrels in U.S. crude stocks.

The EIA said the drawdown in weekly stocks came as refiners hiked crude runs and oil imports fell, which prodded a jump in both benchmark crude grades on Wednesday.

Traders are betting on OPEC and its allies extending supply curbs to offset the weaker demand outlook in 2020.

Saudi Arabia, OPEC’s de facto leader, wants to focus first on boosting adherence to the group’s production-reduction pact with Russia and other non-members, an alliance known as OPEC+, before committing to more cuts, sources told Reuters.

Concerns about demand are weighing on prices with headwinds facing the U.S. and global economy likely to intensify in the months ahead.

Although trade talks over the first phase of a partial trade deal between the United States and China are progressing well, crude oil traders don’t feel an agreement between the two economic powerhouses will have much of a positive impact on demand until the tariffs are lifted.

Economists in a Reuters poll said a steeper decline in global economic growth remains more likely than a synchronized recovery, even as multiple central banks dole out rounds of monetary easing.

Another Reuters poll of economists found the recent truce in the U.S.-China trade war is not an economic turning point and has done nothing to reduce the risk that the United States could slip into recession in the next two years.

In Europe, a survey from economic powerhouse Germany, showed employment in the nation’s private sector fell for the first time in six years in October, suggesting that a third-quarter slowdown could stretch into the closing months of the year.

Economic growth across Asia is set to slow more than expected, according to the latest projections by the International Monetary Fund (IMF).

Earlier this week, the IMF had projected the Chinese economy could grow at 5.8% next year – slower than the 6.1% forecast for 2019. 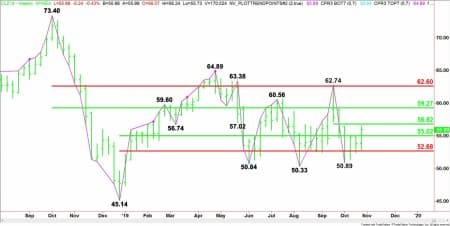 The main trend is up according to the weekly swing chart, however, momentum has been trending lower since the week ending September 20.

A trade through $50.33 will change the main trend to down. A move through $62.74 will signal a resumption of the uptrend.

The minor trend is down. However, a new minor bottom was formed at $50.89.

Based on this week’s price action, the direction of the December WTI crude oil futures contract next week is likely to be determined by trader reaction to the 50% level at $55.02.

A sustained move over $55.02 will indicate the presence of buyers. If this move creates enough upside momentum then look for a move into the minor pivot at $56.82. Look for sellers on the first test of this level.

Overcoming $56.82 will indicate the buying is getting stronger. This could trigger an acceleration to the upside with the next target the major 50% level at $59.27.

The inability to overcome $56.82 will indicate that sellers are coming in to stop the rally. Crossing back under the 50% level at $55.02 will indicate the selling is getting stronger. This could trigger a further break into the 61.8% level at $52.68. This is the last potential support before the $50.89 minor bottom and the $50.33 main bottom.

The rebound in the crude oil market this week was mostly driven by expectations of additional production cuts by OPEC and its allies. The group will meet on December 5 – 6 to decide on the new strategy. This news is expected to continue to underpin the market over the near-term. Meanwhile, concerns over demand will prevent a huge surge to the upside.

The wildcard is U.S.-China trade relations. As long as the two sides are negotiating then look for a slight upside bias. The announcement of a trade deal could spike prices higher. However, prices could plunge if trade talks come to a halt.