A Look Inside Unity Biotechnology’s Transition To An Ophthalmology Company (NASDAQ:UBX)

Home Financial news A Look Inside Unity Biotechnology’s Transition To An Ophthalmology Company (NASDAQ:UBX)
2020-11-282020-11-28By finanz.dk

In my prior article on Unity Bio (NASDAQ:UBX), I focused on how positive UBX0101 Phase 2 data in osteoarthritis was a make-or-break proposition for the company and how the stock price was likely to go up, or down, dramatically based on whatever data was reported.

Unfortunately, as you can see in Figure 1, Unity reported on August 17 that UBX0101 for osteoarthritis failed to meet its Phase 2 primary endpoint, and Unity dropped the entire developmental program in that indication.

The company has since pivoted towards its ophthalmology programs which relate to several retinal diseases. I didn’t cover these in my last article because they weren’t the company’s strategic focus at the time. Now, that has changed, and I wanted to take the time to profile the ophthalmology opportunity.

The retina is the key structure of the eye that Unity is targeting. The retina is the layer of tissue that covers the entire back of your eye and is responsible for receiving light and converting it to the neural signals that are sent to the brain and eventually interpreted as what we see. 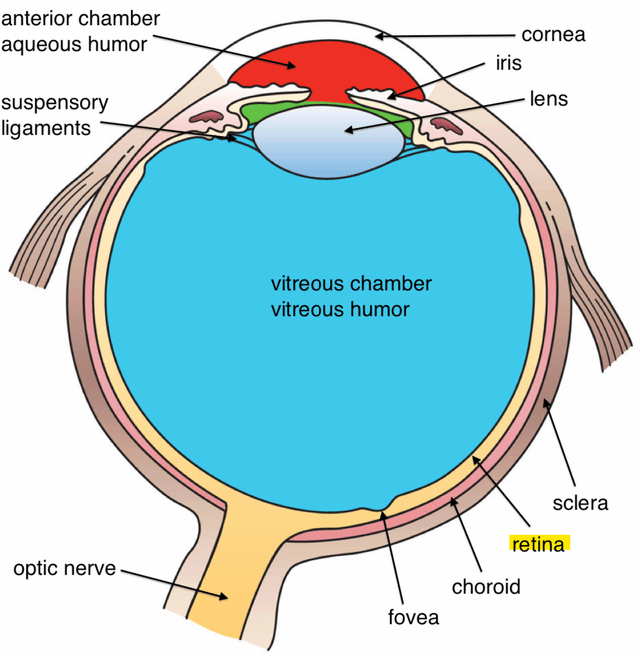 One specific part of the retina, known as the macula, is responsible for central vision and is particularly at issue in the diseases that Unity is targeting.

Age-related macular degeneration, diabetic retinopathy, and diabetic macular edema each appear to stem from inflammation, abnormal blood vessel growth, and other factors that all are associated with the senescence associated secretory phenotype (SASP) that I discussed in detail in my prior article. Age-related macular degeneration is a deterioration of macular tissue leading to central vision loss. The wet form is caused by abnormal blood vessel growth and typically treated with anti-VEGF drugs. VEGF is a factor known to be secreted by senescent cells which are known to accumulate in the aging eye.

The dry form is associated with deposits of lipid and protein behind the retina that are known as drusen deposits. Unity has shown that senescent cells are associated with this drusen accumulation. Diabetic retinopathy is caused by damage to the vasculature supplying blood to the retina caused by the elevated blood sugar levels in diabetes patients. Diabetic macular edema is then the accumulation of fluid under the retina caused by this same blood vessel damage in patients with diabetic retinopathy. Unity has also shown that senescent cells accumulate in the retina of patients with these diseases.

Now, as we saw with osteoarthritis, it’s not simply enough for a particular condition to be associated with an accumulation of senescent cells or with components of the SASP. If senescent cells are a result, rather than a part of the causal pathway, of these eye diseases, then clearing them out may not really do much to improve outcomes for these patients. There seems to be a bit more here in the eye disease setting, though, to suggest that senescence is, in fact, a part of the causal pathway. 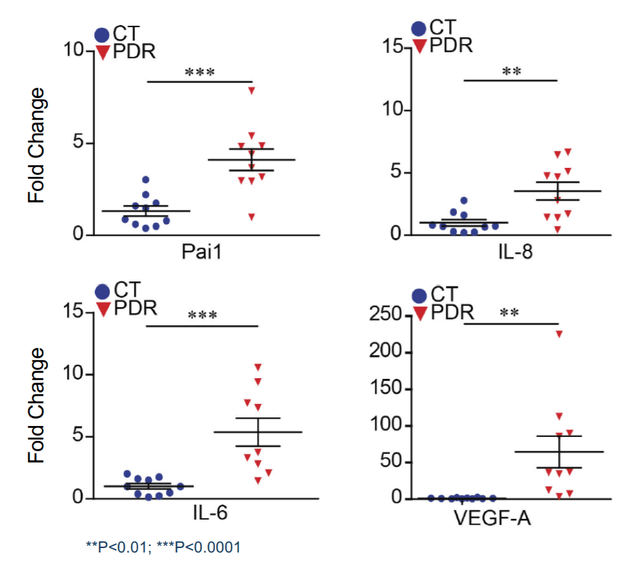 Figure 4 shows measures of known inflammatory SASP factors from the eyes of diabetic retinopathy patients. VEGF, in particular, is important in these retinal disease phenotypes, and this is suggestive that its secretion is due to the accumulation of senescent cells. Thus, decreasing the levels of senescent cells should decrease the accumulation of these harmful factors which in turn might alleviate retinal disease progression.

UBX1325 and its backup ophthalmology molecule, UBX1967, target a family of regulator proteins that are encoded by the Bcl-2 gene and regulate apoptosis or programmed cell death. Unity’s preclinical work has demonstrated that inhibiting these Bcl-2 family proteins leads to preferential elimination of senescent cells via apoptosis. UBX1325 is intended to be an injection into the vitreous (inner gel like center of the eye) that will selectively clear out senescent cells in the eye if successful while sparing other healthy eye cells.

Although UBX1325 is just now entering the clinic, Unity has already achieved promising results in both cell and animal studies. In cell cultures, Unity has demonstrated that UBX1325 has a high affinity for binding to Bcl-2 family proteins, and a separate study in multiple human cell lines, including one using vascular tissue, demonstrated that UBX1325 was potently, yet still selectively, having a senolytic effect.

As far as animal studies go, a single injection of UBX1325 into the eyes of mice suffering from an oxygen-induced retinopathy showed a statistically significant inhibition in the formation of new, abnormal blood vessels that are largely responsible for disease progression in the eye diseases that Unity is targeting. In another mouse model, this time using mice with underlying diabetes, Unity demonstrated that UBX1325 statically-significantly decreased vascular leakage, another hallmark of degenerative eye disease progression.

Unity has also presented a comparison of mouse data from UBX1325 with that of aflibercept, which is the compound better known as Eylea, a multiple blockbuster drug in the degenerative eye diseases that Unity is targeting. 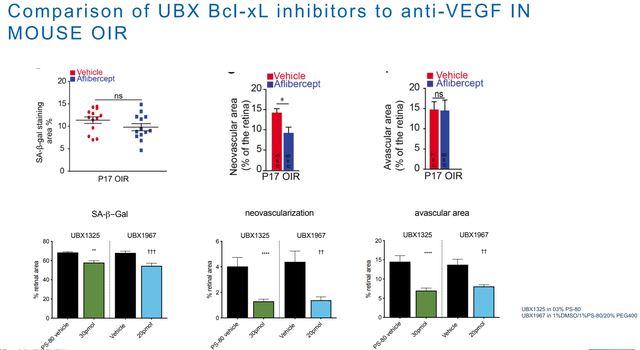 Figure 5 shows results of this comparison, and although it’s not apples to apples, UBX1325 seems to potentially be having a larger and more complete effect in these three measures of disease progression. Again, this is just in mice, but it’s nice to see the company targeting something this time for which there are easy comparators that will allow us to judge UBX1325’s comparative affect. This will be particularly helpful as we start to get clinical data.

These data were sufficient to support moving UBX1325 into the clinic, and as discussed below, Unity is pushing forward with UBX1325’s clinical development as its top priority.

Based on these promising data, Unity has explicitly pivoted to focus almost exclusively on the ophthalmology programs in the near term. On September 15, just a month after announcing UBX0101’s failure, Unity laid out a plan to shareholders for how this pivot would take place. 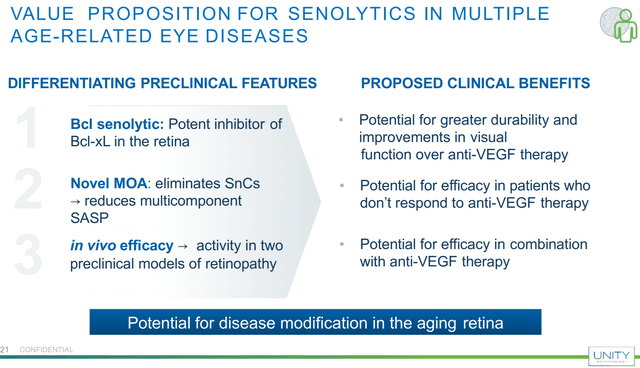 Unity said that UBX1325 is indeed its lead asset now and that diabetic macular edema is the first condition that will be tested in the clinic. Unity guided that a Phase 1 in that indication would get started in the second half of 2020, and that indeed has occurred, with Unity announcing that a first patient was dosed on October 12. This trial is focused on safety and tolerability in four cohorts of three patients each, with three extra patients being enrolled in the maximum tolerated dose group, for a total of 15 patients.

In addition to safety and tolerability data, plasma concentrations of UBX1325 at the various doses used will be reported as a secondary endpoint. Unity has said that data from this trial should come in the first half of 2021 and that a proof-of-concept study will get underway shortly after and likely still in the first half of next year.

Unity also announced some changes with the rest of the pipeline as well as some structural changes to preserve cash. With respect to its pipeline, Unity has started emphasizing its neurology program as a secondary area to its ophthalmology compounds. This is obviously a high area of interest, but Unity’s program is still just at the lead optimization stage, with no definitive targets announced and not even an IND-enabling study ongoing yet. Neurodegenerative disorders are a huge, unmet need, and this could end up being a valuable area for Unity. That said, there won’t be any real impact, if any, from this program for years.

As far as the structural changes go, Unity immediately announced that it was laying off 30% of its workforce to preserve capital. The company will now have just 75 full-time employees moving forward, and Unity estimates that these changes will extend its cash runway out to mid-2022, which should be plenty of time to get key proof-of-concept data in for UBX1325 if it continues to look promising. Unity reported having $132.2 million in cash and equivalents at the end of Q3, so this implies that the company expects its net losses of about $25 million per quarter to narrow some moving forward.

I think it goes without saying that, if Unity has a setback with UBX1325 like it did with UBX0101, it will likely lead to substantial dilution at best, and current shareholders would almost certainly suffer significant losses.

While I’m a big fan of the company and am certainly rooting for its technology to ultimately succeed in targeting multiple diseases of aging, I sold all my shares after the osteoarthritis failure and do not intend to consider taking another position any time soon. The science behind Unity’s technology is completely novel, and this makes the risk extremely high for now, especially given the technology’s failure to translate into clinical success in the first indication.

I try to focus my analysis more on companies with some element of de-risking already in my Marketplace Service, Biotech Value Investing. Biotech Value Investing provides in-depth coverage of my approach to finding high-quality, value-oriented companies in the biotech sector. This approach, developed through years of studying the value investing greats, is intended to use the inherent volatility of the biotech sector to my advantage by sticking with high-quality companies for the long-haul and using options to help generate a high compounded return while ensuring optimal entry and exit points. Check us out today with a free trial.

Additional disclosure: I’m not a registered investment adviser. Please do not mistake this article, or anything else that I write or publish online, as any type of investment advice. This article and anything else that I post online are for entertainment purposes only and are solely designed to facilitate a discussion about investment strategy. I reserve the right to make any investment decision for myself without notification except where required by law. The thesis that I presented may change anytime due to the changing nature of information itself. Despite the fact that I strive to provide only accurate information, I neither guarantee the accuracy nor the timeliness of anything that I post. Past performance does NOT guarantee future results. Investment in stocks and options can result in a loss of capital. The information presented should NOT be construed as a recommendation to buy or sell any form of security. Any buy or sell price that I may present is intended for educational and discussion purposes only. Please think of my articles as learning and thinking frameworks–they are not intended as investment advice. My articles should only be utilized as educational and informational materials to assist investors in your own due diligence process. You are expected to perform your own due diligence and take responsibility for your actions. You should consult with your own financial adviser for any financial or investment guidance, as again my writing is not investment advice and financial circumstances are individualized.