A Limited Risk Play In A Shaken Market

It has been another crazy week in the stock market as traders have reacted to a signal of impending recession sent by U.S. Treasuries. At one point earlier this week, the yield on the 10 Year Treasury Note briefly dropped below that on the 2 Year, completing the “inversion” of the yield curve that started to form back in December when the 5 Year yield fell below the 2 Year. As I’m sure you are aware by now, the 2s 10s inversion has preceded every recession in the last 50 years, but what has not been said as often is that not every inversion has resulted in a recession.

Given the distortion in global bond markets that has resulted from post-recession central bank intervention around the world, there is a good chance that this will be one of the false signals. Stock traders, however, have reacted as if a recession is certain, and one of the hardest-hit sectors has once again been energy. That isn’t a surprise. It has been a frustrating year for energy investors as every hint of a slowdown has put stocks in the sector under pressure, and a full-blown recession would obviously impact energy demand.

After such a bad year, though, much of the pessimism that the inversion has engendered in stock traders was already priced into the more globally sensitive energy markets. That makes this push lower look like a good opportunity for those with a longer-term view to start picking up something like the energy sector ETF (XLE) at what looks like a discount.

I’m sure some of you are thinking, I’ve heard this before, and you would be right. I, for one, have seen an opportunity for a bounce in energy before, only to be frustrated as the sector, after a brief recovery, dropped even lower. That, however, doesn’t mean that you should ignore an opportunity like this. Providing you employ good position management, even a short-term bounce allows you to bet on a long-term bounce without risking much if anything at all. 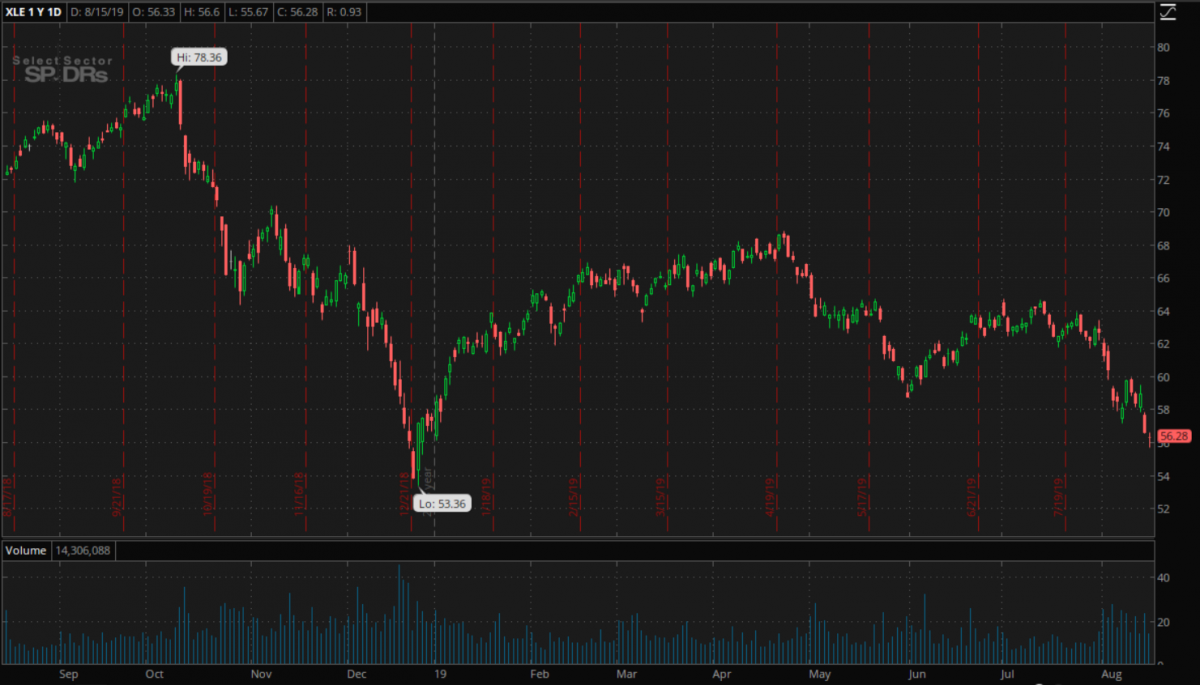 In this case, the multi-year low in XLE of $53.36 formed at the end of last year is close enough to be the basis of an initial stop-loss order at, say around $53. That would limit potential losses on a position at this morning’s levels around $56.50 to just over six percent. The real trick though is to adjust that stop should we see a short-term bounce. If we move just a couple of bucks higher, it should be possible to structure the trade to have minimal losses, if any at all, but still have the potential to benefit from a real turnaround in energy stocks.

So, what are the chances of that short-term bounce coming? I would say that, for political reasons if no other, they are good.

Everyone is aware by now that Donald Trump follows the stock market. Much of his claim to success in his time as President has been based on stocks at record highs. One of the things I have noticed is that, probably as a result of that, a bad run in stocks is often followed by some optimistic comments from the President and/or others in the administration about the trade negotiations. It would come as no surprise if we saw the same again over the next few days. Even the energy markets, where supply is at least as important as demand, have been reacting recently almost entirely to trade-related news, so if we do see some optimism, a significant move up will follow.

None of this makes buying XLE a certainty, of course; that is why an initial stop loss is part of the trade design. But there is a good chance of some positive trade news, the Fed looks resigned to cutting rates again, and pessimism looks priced in almost completely. That limits the downside from here and makes an upward correction likely, so it is a trade with an attractive risk/reward.