A historic gender gap: why men and women are voting differently

Genevieve Woodard Hartley and her husband used to vote for the same presidential candidate. Not this year.

While both describe themselves as Republicans, the couple, who live in Houston, Texas, is “splitting” its ticket. Ms Woodard Hartley will vote for Joe Biden, the first Democrat she has backed for US president, while her husband is sticking with Donald Trump.

“I would ask him how he could vote for someone who speaks in a misogynistic way about women and his bottom line is, ‘I will vote for the Republican, I will vote for a goat if it’s a Republican, it doesn’t matter’,” said Ms Woodard Hartley, whose husband declined to be interviewed and asked that his name not be used.

Ms Woodard Hartley added: “That’s his bottom line. And my bottom line is the complete opposite.”

The couple is a microcosm of a wider trend. Polls suggest that this election could result in the widest gender gap on record, with 50 per cent of men projected to support Mr Trump versus 35 per cent of women, according to an average of this year’s Wall Street Journal-NBC News surveys. 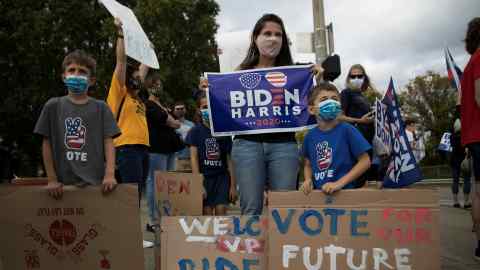 If replicated in the actual vote, the 15-point gap would be 4 percentage points larger than the 11-point divide in the 2016 election.

“We’re headed for a historic gender canyon, not gap,” David Wasserman, the US House editor of the non-partisan Cook Political Report, tweeted on Sunday.

In all presidential elections since 1980, the gender gap has ranged between four and 10 points, according to data from Rutgers’ Center for American Women and Politics, with the exception of 2016 and 1996, when there was also an 11-point gap.

While an equal number of women and men broke for Jimmy Carter in 1976, a gap began to open up in subsequent elections. Historians attribute the trend in part to the women’s rights movement and the Democratic party’s support for the Equal Rights Amendment and the Supreme Court’s decision in Roe vs Wade.

In Maricopa County, Arizona, a key battleground in this election, Lorna Romero, a Republican consultant, said Mr Trump had lost a significant amount of support among moderate Republican women and those who were conservative leaning but registered as independent.

“It really comes down to the behaviour of the president. When you look at women, especially in this category, a lot of them are moms,” Ms Romero said. “These are not behaviours they want reflected in the commander-in-chief.”

She added: “I think for men to see that type of brash leadership isn’t something unfamiliar. You see that in the corporate world, you see that in the sports world. There is a certain type of demeanour that men are more used to. They’re not as offended.”

Ms Woodard Hartley, who worked on George W Bush’s campaign and as a junior staffer in his administration, said she believed there were more women like her in Republican-leaning Texas who were backing Mr Biden because they had “a character issue” with Mr Trump.

As for her husband, she said: “We don’t really talk politics in the house any more, because it would cause arguments.”

In Harrisburg, Pennsylvania, Amy Albright, a Bush-Obama voter who has changed party affiliations multiple times and voted for Mrs Clinton in 2016, said she had also stopped talking to her husband about politics since Mr Trump was elected.

Her husband was more sympathetic to Mr Trump and liked that he was a businessman and was not a normal politician, she said. Ms Albright said she considered the president and his behaviour “horrible” and was backing Mr Biden, a politician who was not her first-choice candidate but whom she believed would put the country back on track.

“I would take Darth Vader at this point,” Ms Albright added.

Mr Trump is making a last-minute pitch to college-educated suburban women, but Lara Brown, a professor at George Washington University, said he had already lost many of these voters in 2018 when they helped Democrats to flip the House of Representatives in the midterm elections.

“The real question is ‘will suburban husbands catch up with their wives?’” she added.

In the Dallas suburbs, Sharon Valdez, an independent voter, cast a reluctant vote for Hillary Clinton four years ago, a choice she considered “the lesser of the two evils”. Now she is voting enthusiastically for Mr Biden and has convinced her husband to follow her lead after he wrote the name “Mickey Mouse” on his ballot in 2016.

“He was one of those uninformed people who just didn’t really like Hillary,” she said. But she has convinced him that Mr Trump is bad for the country and that this is an election he cannot afford to sit out.

Kelly Dittmar, a scholar at the Center for American Women and Politics, said that if enough white college educated men did move into Mr Biden’s column, it could reduce the projected gender gap.

Mr Trump has also been losing ground among non-college educated white women, according to Mike Mikus, a Democratic strategist in the Pittsburgh suburbs.

“The blue-collar white guys for the most part are voting the same way they voted in 2016. Where I notice a difference is the blue-collar women . . . they’re just done with his behaviour,” Mr Mikus said.

Ms Dittmar said the Republican party might be able to win back conservative women who had turned against Mr Trump if he was ejected from the White House.

But a chunk of these voters are probably more moderate than the Republican party and had likely shifted to the Democrats because of issues including gay rights and climate change, she added.