A Crisis Is Brewing For Offshore Oil 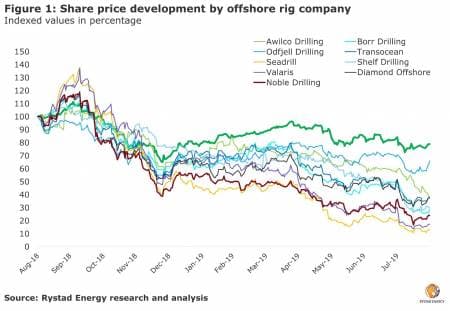 – The stock prices of offshore drillers have declined sharply this year, falling faster and farther than the price of oil.

– “Yet the offshore rig market as a whole hardly seems to notice, propelled by the increased sanctioning of greenfield projects coupled with a substantial amount of brownfield work aimed at maintaining legacy production,” Rystad Energy said in a report.

– Drillship utilization has fallen sharply since the oil bust in 2014, but rebounded by 14 percentage points in a nine-month period through July.

– However, looking forward, “there is a lack of long-term work embedded in the current contract portfolio,” Rystad said. The “healthy utilization growth seen in the first half of the year is poised to fall off a cliff within this environment of short duration contracts, where term contracts do not appear prevalent in the near future.” 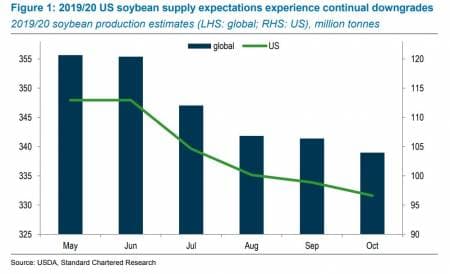 – Floods earlier this year in the U.S. Midwest slashed expected corn yields, but the later planting schedule for soybeans was thought to minimize impact for that market. Weak Chinese demand due to the trade war also kept the market soft and prices down.

– A swine flu outbreak in China also cut into demand after a widespread culling.

– “However, optimism has returned to the soybean market, with prices firmly above USD 9/bushel since end-September and CFTC managed-money positions moving into net long territory last week for the first time since February,” Standard Chartered wrote in a note on October 15.

– The price increases have come as the forecast for production for 2019/2020 has been repeatedly downgraded.

– The partial trade deal announced a week ago, and “goodwill buying” of soybeans in the lead up to the talks, has also tightened the market. 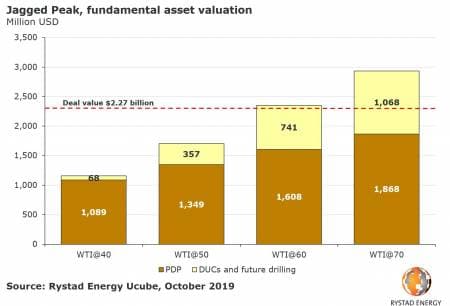 – Market analysts and investors have been banging the drum on consolidation in the shale industry, with a surplus of unprofitable drillers hanging on for dear life.

– “The deal implies a WTI oil price of $60 per barrel, which, from a fundamental perspective, suggests that the rather negative initial market reaction may be warranted,” Artem Abramov, head of shale research at Rystad Energy, said in a note. “Parsley Energy must prove to investors that it is able to integrate the acquired assets into its portfolio, and generate more value than previous indicators have suggested.”

– The acquisition would expand Parsley’s footprint in the Permian, implying higher spending levels.

– “As such, our model suggests very little valuation upside in $40 WTI world, with at least a $60 WTI needed to bring JAG’s fundamental asset value in alignment with the announced deal value,” Abramov said.

– Parsley’s stock dropped by more than 11 percent on the day the deal was announced, but it regained ground mid-week. 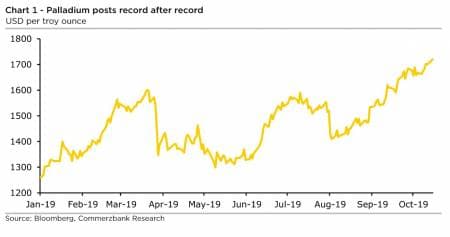 – “Palladium appears unstoppable and has reached a new record high of just shy of $1,730 per troy ounce this morning,” Commerzbank said in a note on Tuesday.

READ ALSO  Tired and awestruck: the troops defending US democracy

– “From a fundamental perspective, however, we see no compelling reasons at present why the price should keep being driven ever further up,” Commerzbank cautioned. The bank cited a contraction in car sales in China. Palladium is a precious metal used in emissions control technologies in cars.

– “There is still no light at the end of the tunnel, even though the Chinese authorities have taken measures to kick-start car sales,” Commerzbank concluded. 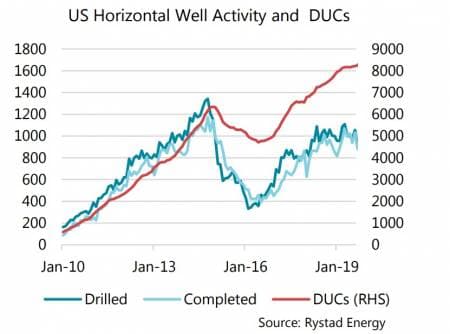 – U.S. oil production growth has ground to a halt this year, after explosive growth over the last few years.

– “Growth slowed in 2019 as capital discipline has become a higher priority for producers with investors demanding better returns,” the IEA said in its latest Oil Market Report.

– Pure-play shale companies have already cut upstream spending by 6 percent this year relative to their initial guidance. Drilling has plateaued after several years of growth.

– “Operators shed another 29 rigs during September so that by end-month, there were 172 fewer active rigs than at end-2018. The frac spread count has declined 23% since March, to a 2.5-year low,” the IEA said. 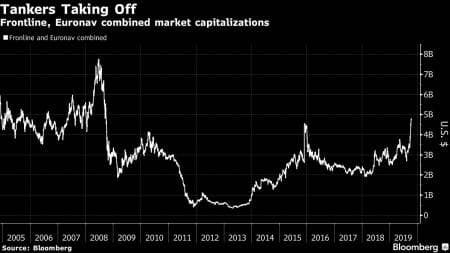 – The cost of shipping spiked to levels not seen in a decade over the past few weeks. Tanker attacks in the Middle East have pushed costs higher, but the real spike came after the Trump administration decided to slap sanctions on Chinese shipping giant Cosco.

– Shippers not named Cosco are happy. “This is an exciting dynamic that could create the foundation for a steady improvement in rates and a sustainable period of out-sized cash generation,” said Robert Hvide Macleod, CEO of Frontline Ltd., told Bloomberg.

– But refiners are not as pleased. Daily rates for a VLCC running from the Persian Gulf to China soared by 90 percent to over $300,000.

– China’s largest oil refiner, Sinopec, is planning on cutting run rates due to the high cost of shipping. That ultimately could push up product prices (gasoline, diesel) in Asia. Higher product costs could actually hit demand, which could lower crude prices.

– That could boomerang back on U.S. oil producers. 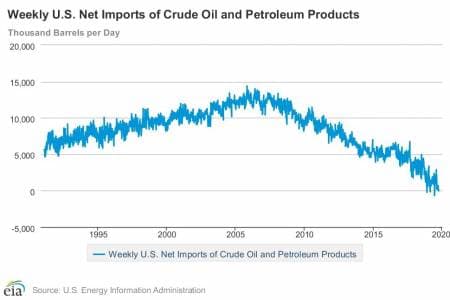 – The U.S. has been a major exporter of refined products for years, and a significant crude exporter more recently. But even as exports have climbed, imports have remained much higher.

– However, EIA data from the past two weeks shows that the U.S. has become a net exporter of crude and refined products for the first time in modern history. The net balance just barely favored exports by 30,000 bpd in the last two weeks.

– This is part of a longer-term trend that began in 2005, which was the peak year for net import dependence.

– Flat demand and rising production and exports have steadily moved the balance towards positive territory.

– With more crude export terminals under construction on the Gulf Coast, combined with a slow trend towards efficiency in transportation, the shift towards stronger net exports will likely continue.