Local officials on the ground in northern Syria say that hundreds of ISIS figures have already escaped. Turkey has rejected US calls for a ceasefire, and now Syrian regime forces have entered the region on behalf of the Kurds, with Russians right behind and positioning themselves between Turkish and Syrian forces.

American forces previously were stationed in blue areas listed below but have stepped aside. Syrian government forces have now rolled into Manbij, which the US has abandoned. 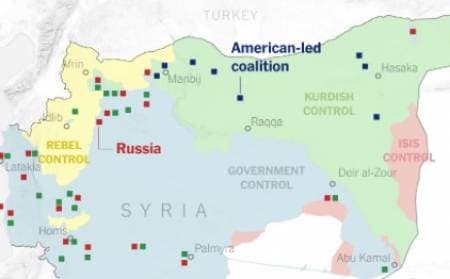 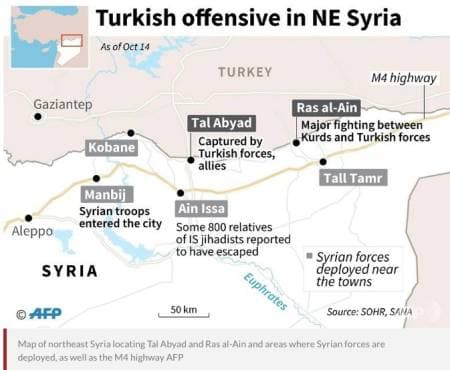 All the onshore in Syria is in this region, and now it’s effectively up for grabs. No one wants it to go to ISIS. Even the Syrian Kurds will choose Assad over ISIS.

But what, exactly is up for grabs?

Russia has long been working to secure Syrian oil for itself. It needs this oil – and pipeline access – to strengthen its position in the Eastern Mediterranean. Syria is the key to maintaining Russia’s control of the Mediterranean and getting out in front of any new gas projects that threaten its EU market share. Eventually, Europe’s gas is going to come from the Mediterranean: The question now is who will control that gas.

Until last week, the US was nominally in control of the Syrian Kurdish forces who control the key onshore oilfields in the country’s northeast. The vacuum, very abruptly created by the retreat of US forces, was a greenlight for a Turkish invasion that is going to get extremely tricky. The Turks certainly don’t want the Kurds controlling this oil. But having been abandoned by their US allies, the Kurds will now run to Assad, and Russia, and another front in this conflict will open up because the Turks’ agenda won’t line up with the Russians.

Supported by US military advisors and NATO aircraft, the Syrian Kurd SDF forces had succeeded in driving ISIS out of the territory and taking control of the oil-rich Deir Ez-Zor area. This entire area became a major threat to Turkey because it united a large collection of Syrian tribes and clans and ended up weakening Turkey’s ties with the Al Nusra Front. Turkey is now desperate.

Russia, Iran and Turkey are now going to war for Syrian oil and infrastructure. On paper, Russia has the exclusive rights to produce oil and gas in Syria. The regime has also given the Iranians the port of Latakia, much to Moscow’s dismay; plus, Syria is in substantial debt to the Iranians for credit for fuel. The Russians get the much smaller port of Tartus, which will probably be used for Syrian offshore gas facilities in the prolific Levant basin.

In the meantime, Washington has slapped new sanctions on Turkey, but only after allowing the Turks to invade in the first place. For starters, the US has stalled a $100-billion trade deal that was in the works with Ankara, and renewed 50% tariffs on Turkish steel. Washington has also imposed sanctions on senior Turkish officials in the defense and energy ministries. So far, Turkey has simply ignored these sanctions and is pressing on with its invasion. The level of sanctions is not close to enough to get Turkey to halt its invasion.

The US abandonment is pushing the Syrian Kurds towards the Russians, who have already cut a deal between the Kurds and the Assad regime. Publicly, the Turks have been scheming to invade northern Syrian in order to push Syrian Kurd forces further from the Turkish border to reposition that threat further away, and at the same time, create a buffer zone where it Ankara could effectively get rid of 2 million Syrian refugees it’s currently housing in Turkey. It’s not a sound policy. Turkey’s move will create yet another front in this never-ending conflict and will work to displace many more people, creating additional refugee problems and opening up another advantage to ISIS which was nominally defeated in Syria. The Syrian invasion will not end well for Turkey, Turkey’s economy, or Mr. Erdogan who clearly did not expect to get his way on Syria.

The EU is also preparing new sanctions targeting Turkey in response to its gas drilling activities off the shore of its member country Cyprus, and possibly in retaliation for the Turkish incursion into Syria. Measures could include EU travel bans and asset freezes, but the Cypriots aren’t really holding their breath that any sanctions will be devastating enough to scare of Turkish drillships. Last week, Turkey dispatched a drillship to waters where the Cypriot government licensed Italian energy company Eni and Total to conduct an oil and gas search. Also on Monday, European Union countries committed to suspending arms exports to Turkey over Syria.

– US sanctions on the Turkish Energy Ministry will affect two key companies: BOTAS, the country’s state-run gas importer, and TPAO, the state-run oil producer. TPAO also owns and operates the drillships that have been deployed to the Cypriot offshore EEZ. TPAO also operates in Azerbaijan, Russia and Afghanistan. BOTAS has gas import contracts with Russia, Azerbaijan, Iran, Nigeria and Algeria, and buys spot LNG from the US and Qatar primarily.

– The U.S. Treasury Department has imposed sanctions on two South Sudanese businessmen and six of their companies for alleged corruption. Kur Ajing Ater and Ashraf Seed Ahmed Al-Cardinal are both said to be linked to the country’s oil industry, and US authorities claim that the government paid them 3 million barrels of crude in 2017 for the “provision of undisclosed goods and services”. Ajing is also alleged to have bribed government officials to maintain influence and access to South Sudan’s oil market. The Treasury is citing a report by The Sentry, a US-based NGO.

– Chinese Sinopec, the largest refiner in Asia, may cut crude oil imports in December and reduce refinery output due to increased global tanker freight rates that are eating away at margins following a series of Iran-related incidents and sanctions on Chinese shipper COSCO for dealing in Iranina oil.

– Angola is expected to launch an international tender later this month for the construction of the Soyo oil refinery, near its northern border with the Democratic Republic of Congo. The government is looking for a consortium to finance, build and operate the 100,000 bpd crude oil refinery, which they hope can be completed by 2023. The country needs the equivalent of 360,000 barrels of oil processed per day, which accounts for 80% of imported refined products, to meet the needs of the domestic market. In total, that means building three new refineries and expanding the existing Luanda refinery.

– Santos has agreed to buy the northern Australian assets of ConocoPhillips for $1.39 billion, including the Darwin LNG plant and gas fields off northern Australia. Conoco will retain its stake in the Australia Pacific LNG plant in Queensland state. Santos has had success in Australia, the most recent from the Caley reservoir of the Dorado field, with a flow rate of 30,000 bpd. Santos owns 80% of the project.

– Back in the US shale patch, oil and gas producer Parsley Energy has said it would buy Jagged Peak Energy Inc in an all-stock deal valued at over $1.6 billion. The merger is expected to take place in 2020 and will give Parsley 267,000 net acres in the Permian.

– Saudi Arabia is still trying to muscle through Aramco’s IPO, and recent reports indicate that Aramco has shelled out near $450 million on advisers from 20 banks. Aramco’s prospectus is due is just two weeks, and the vague but emphatic word from Saudi officials is that it will happen “very, very soon”. The next milestone will be a meeting between advisors and Aramco’s board to approval the share sale of the local part of the listing. Locally, investing in Aramco is seen as a patriotic duty, and Saudi banks are prepared to lend money to interested parties to invest. The $2 trillion valuation will still be a sticking point. But other negative factors are threatening the success of the IPO as well, the first being the September 14 attacks on Aramco’s infrastructure that took offline almost 6 million bpd, and then the death of at least two and wounding of as many as 18 workers at Aramco’s SASREF oil refinery that it operates with Shell.

– Ecuador has buckled under the pressure of protests, reversing its decision to end fuel subsidies and agreeing to deal with indigenous groups who had taken over state-run oil facilities and forced Ecuador’s state-run oil company to declare force majeure. Ecuador had cancelled the long-running fuel subsidies after prompting from the IMF who had loaned Ecuador money. The IMF had blamed Ecuador’s poor economic situation in part on the hefty fuel subsidies, claiming that politics had prevented Ecuador from acting fiscally responsible in this area. The deal has ended two weeks of violence that had forced the president to flee the capital.

– Two anonymous US officials claim that Washington has engaged in a secret cyber attack against Iran following the September 14 attacks on Saudi Aramco facilities. The purpose of the attack, which targeted physical hardware, according to sources, was to keep Iran from spreading propaganda.

– Russian state-run Rosneft oil company is being used by India’s Nayara Energy as an intermediary for Venezeulan oil. The deal is a swap deal that sees Nayara paying Rosneft in fuel instead of cash to bypass US sanctions after Washington banned US-dollar transactions for Venezuelan oil at the beginning of this year. Nayara is part-owned by a consortium led by Rosneft, according to an ongoing investigation by Reuters. They aren’t technically violating sanctions unless this is converted to cash that goes to Maduro.