A Comment on Walter Block’s ‘Bad Capitalism and Good Socialism’ 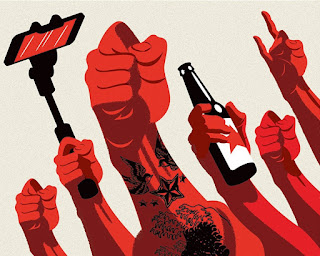 The great and important libertarian Walter Block (He deserves a Nobel Prize) has done it again. He has managed to place one of his essays in a mainstream publication. This time The Wall Street Journal. In the past, he has successfully placed commentary in The New York Times.

I must commend Dr. Block for this success. However, my view is that he is being too much of a nice guy to socialists of the world. The title of his Journal article gives it away, Bad Capitalism and Good Socialism.

There is nothing wrong with reaching out to socialists but it is extremely dangerous to throw away foundational principles to do so.

Is socialism the enemy of the civilized order? It depends on what kind of socialism we are discussing.

I believe what both Ludwig von Mises and Friedrich Hayek proclaimed, that socialism is impossible.

Now, Dr. Block attempts to get around this by providing examples of supposed “good socialist” groups that freely associate in some type of communal fashion where everyone is “equal” rather than coercive type socialism.

He makes clear the contrast between his “free association socialism” with coercive socialism:

There is a second, just as historically accurate a definition of socialism as the first. It is predicated on the Marxian nostrum: “From each according to his ability, to each according to his need.” If this goal is attained on a coercive basis, then, yet again, this compulsory egalitarianism is surely uncivilized. It amounts to stealing from the innocent rich. But suppose people agree to live under this principle? Ayn Rand might not like this too much, but, if it is truly voluntary, then instead of being incompatible with civilized principles, it is a paradigmatic case of them. That is, the rich agree to be “expropriated” in favor of the poor.

Are there any such institutions that actually flourish? Here are a few: the convent, monastery, kibbutz, commune, syndicalist association, cooperative. I teach at a Jesuit school, and all members of this order subscribe to the “from each, to each” philosophy.

But there are many problems with this framing. First, it is giving away the foundational principle when one does not make clear that egalitarianism can not occur even on a voluntary basis for society at large. (See: Egalitarianism as a Revolt Against Nature and Other Essays).

So one can play being an egalitarian or a socialist but that is about it.

Dr. Block mentions the Jesuits and their “from each, to each” philosophy. But does Dr. Block have the same size office and staff of assistants as does the president of the Jesuit Loyola University where he teaches?

And what about the Jesuit Pope? Has he invited all Jesuits to hang out in rooms in his palace at the Vatican?

And do the Jesuits not associate in exchange and associate with people outside of their community?

The largest kibbutz is Kibbutz Yagur in Israel. It has a population of only 1,604. That is, it is pretty much an extended family. It is for all practical purposes an agricultural operation that sells its product beyond the community, with a petting zoo for tourists.

As a rural, authentic kibbutz, everyone plays an equally important role in making the kibbutz function. Jobs vary from working in the Refet (cow farm), the laundry, the petting zoo, the cleaning staff, the wedding garden, and out in the fields. You will be placed in a job which matches your skills and the level of Hebrew you need to know to get the job done.

A half a dozen tasks divided is not exactly a complex society. It is a play society–that can’t survive on its own.

Indeed, even when it comes to cell phone carriers, they must reach out beyond their little goup. Kibbutz Yagur tells its interns:

Cell phones are a must in Israel, almost everybody has one. You can purchase a cell phone or a chip at the airport or at the kibbutz when you get settled. We recommend purchasing one right away. The three major carriers are: Orange, Cellcom and Pelephone. Both prepaid and monthly plans are available, but monthly plans require either a credit card or an Israeli bank account.

Monasteries, convents and cooperatives are also pretty much the same. They are clubs, some of whose members think they could extend their clubs to the entire complex world. Even though they can’t supply what they need for their own tiny clubs.

It is delusional thinking if these groups think that what they are doing can be expanded to the world at large and I wish Dr. Block would have made that clear. Yes, in a free world, you are free to do anything you damn want but it should also be made clear that no economy of any size at all could survive on socialist or egalitarian principles.

And that is only for starters. As Murray Rothbard put it:

To mount an effective response to the reigning egalitarianism of our age, therefore, it is necessary but scarcely sufficient to demonstrate the absurdity, the anti-scientific nature, the self-contradictory nature, of the egalitarian doctrine, as well as the disastrous consequences of the egalitarian program.

To think that a socialist society could freely emerge over a large population, if only everyone freely agreed to the concept, is to deny the fundamentals of economics.

As Mises put it:

And when Dr. Block introduces the concept of “Bad Capitalism,” when he refers to what is called Crony Capitalism, I can only think about the comment Mises made about Nazism:

I wish Dr. Block would not have written:

Yet under the veneer of economic freedom, markets have their dark side, too:

No, markets do not have a dark side, the stunting of free markets is dark.

And, thus, I wish that Dr. Block would have not concluded his essay with:

No, not all versions of socialism are the enemy of humanity and decency, nor are all types of capitalism their friend. It all depends on which variety of each we are discussing.

If AOC read his essay, she is going to conclude that some versions of socialism are good and that she is just more willing to fight evil, through coercion, than is Dr. Block. She won’t get at all the emphasis economists put on the fact that the world is a very complex place and that socialism is impossible for this reason for a greater society. It can not succeed beyond a play thing amongst a tiny group who live in a way that could never support even a tiny fraction of the 17.5 billion that now exist on the planet.

And so to Dr. Block, I say, “Please, please, Walter, stop being so damn nice to the socialists.”