The Federal Housing Finance Agency is the regulator of Fannie Mae (OTCQB:FNMA) and Freddie Mac (OTCQB:FMCC) and has finally released the long-awaited reproposal of the capital rule. At first glance, I like to think that Calabria didn’t bother spending a single second in trying to understand the actual business risk of Fannie Mae and Freddie Mac. Prior to conservatorship, Fannie and Freddie operated with far less capital than this rule proposes as the capital they held was based on the actual risk of the business. The previously proposed capital rule set capital requirements at what would have prevented the enterprises from “having to be bailed out” in a similar economic crisis that we had in 2008. This one seems to take it a step further and throws out the notion of business risk whatsoever. Instead, it seems Calabria sat down with financial advisors and lawyers and said, “I want you guys to come up with a capital rule that will allow Fannie Mae and Freddie Mac to raise enough money to irreversibly exit conservatorship while simultaneously forcing them to hold as much capital as economically viable.” That’s what I think this new capital rule is. It is a deal making framework that will get Fannie and Freddie out of conservatorship.

Investment Thesis: This capital rule sets the stage for putting Fannie and Freddie onto an irreversible path out of conservatorship via raising capital. To this point, the companies are on track to hire their financial advisors who will underwrite this process in the next month. The prevailing consensus is that the companies cannot raise capital until the lawsuits are settled. This sets the stage for a pretty straight forward series of events where the economics of the net worth sweep are reversed, the warrants are exercised and junior preferred are converted to common to settle the contract claims in Lamberth’s court and clear the capital structure to help facilitate the recapitalization. This creates space in the capital structure to raise money by selling new preferred and other securities to fill up the capital stack as fully as possible. My general overview of this capital rule is that it sets the stage to get the deal done. With this capital rule, I think both commons and preferred stock trade higher from here across the next 12 months.

This Capital Rule Looks Like A Deal Making Framework

As always, the devil is in the details. This thing is 424 pages long. The main point here is that there are restrictions to how much the company can pay out in dividends and bonuses based on how much capital they hold:

If an Enterprise is subject to a maximum payout ratio, the payout restrictions would apply to all capital distributions, which generally extends to dividends or payments on, or repurchases of, CET1, tier 1, or tier 2 capital instruments (except, with respect to a payment on a tier 2 capital instrument, if the Enterprise does not have full discretion to permanently or temporarily suspend such payments without triggering an event of default). The payout restrictions would also extend to discretionary bonuses, broadly defined to include any payment made to an executive officer of an Enterprise where the Enterprise retains discretion as to whether to make, and the amount of, the payment, the amount paid is determined by the Enterprise without prior promise to, or agreement with, the executive officer, and the executive officer has no contractual right to the payment.

FHFA expects that each Enterprise generally will seek to avoid any payout restriction by maintaining regulatory capital in excess of its buffer-adjusted risk-based and leverage ratio requirements during ordinary times.

So, long story short, you can bet your bottom dollar that management wants to get its maximum bonuses over everything else. As such, I expect that FHFA is right when it surmises that the companies will likely be exceeding this during ordinary times. Now, you may wonder, how exactly do you get two companies to raise what appears to be over $200B when there are so many restrictions? The answer is simply that FHFA is going to phase these restrictions in over time in order to get this recapitalization deal done:

FHFA is soliciting comments on whether some or all of the payout restrictions should be phased-in over a transition period. In anticipation of the potential development and implementation of a capital restoration plan by each Enterprise, tailored exceptions to the payout restrictions might be appropriate to facilitate an Enterprise’s issuances of equity to new investors, particularly to the extent that any tailored exception would shorten the time required for an Enterprise to achieve the regulatory capital amounts contemplated by the proposed rule or otherwise enhance its safety and soundness. For example, a tailored exception to allow for some distributions on an Enterprise’s newly issued preferred stock might increase investor demand for the offerings of those shares. Similarly, a tailored exception for some limited regular dividends on an Enterprise’s common stock might increase investor demand for those shares.

Further, the capital raise doesn’t have to happen all at once.

Josh Rosner, who put together the original recapitalization framework that the Moelis blueprint was later based on, commented on the feasibility how much capital it takes to get Fannie and Freddie out of conservatorship:

Frankly, if you include a year and a half of retained earnings, the overpayment of Treasury’s SPSPA, capital from issuing new preferred to fill the place of existing preferred, the amount of new commons you have to sell in order to get this show on the road isn’t a deal killer. With this deal making framework, you could even say that these new preferreds as well as the common sold to raise the money could pay dividends as long as they are on the road to recapitalization. This would help facilitate interim capital raises. I also expect FHFA to hike guarantee fees another 10 basis points this summer to help get this done.

The Trump administration appears to be staging this so that it doesn’t have to do anything controversial until after the election this year, but no matter what, the outcome will set these companies on an irreversible course out of conservatorship. The big bang is the government’s write-down of senior preferred stock and putting overpayments back to the GSEs as a means of neutering the vast majority of the lawsuits against how it has accounted for Fannie and Freddie’s conservatorships in the spirit of taking the only non-cash action that paves the way for Fannie and Freddie to be able to raise the necessary capital to exit conservatorship. Without this, Fannie and Freddie cannot raise capital, which kind of defeats the purpose of coming up with the plan last year, stopping the sweep as an interim step of the plan, hiring a law firm and a financial advisor and now coming up with a capital rule.

ACG Analytics is a firm that has been on the cutting edge of GSE reform, and although its timeline has been a bit too bullish in the past, perhaps this 10th version is closer to reality: 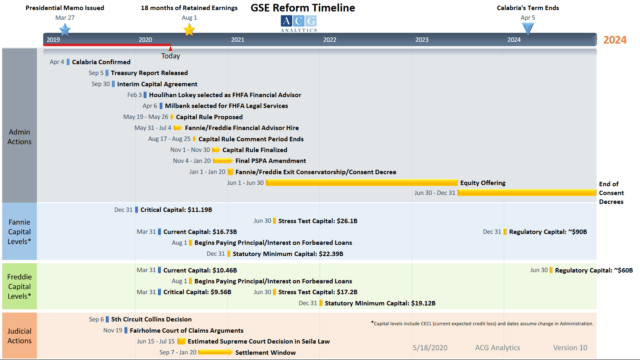 As a preferred shareholder, the companies cannot raise money via an equity offering until the breach of contract claims in Lamberth’s court are settled. If you look at ACG’s timeline, that puts preferred in the settlement driver’s seat as soon as five months from now with an expected settlement within eight months. It’s expected that they convert to common. It doesn’t make sense that they see any cash dividends on their existing shares. This is a recapitalization. If you look at the capital rule, there is no way Fannie and Freddie managements spend money paying existing preferred a single dividend when they can retain that money at the enterprise level so they can pay themselves bigger bonuses sooner.

Tim Pagliara, who has over $1 billion in assets under management and has a position in Fannie Mae and Freddie Mac preferreds and commons, commented that he thinks the companies can completely exit by 2022:

I’m confident that the bulge bracket financial advisors, which are probably Goldman Sachs and JPMorgan, that are hired by Fannie and Freddie can figure out how to get this done with this capital rule.

Just to kind of give you an idea of how this works. The most recent Moelis plan values the equity between $234B and $266B:

Not surprisingly, FHFA sets the capital requirements at $233.9B: 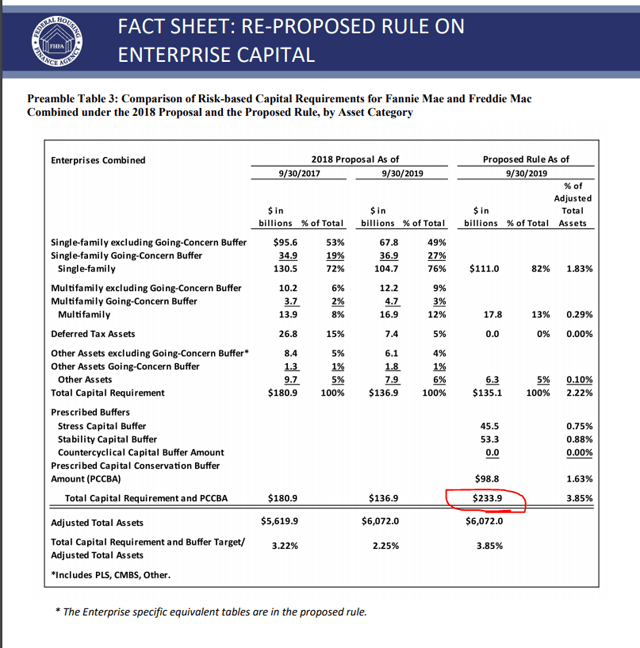 Calabria might as well have just taken the Moelis plan and said that Treasury didn’t need the $100-$125B as much as the companies did. What you see here is simply Treasury’s profits being shifted into capital held by Fannie and Freddie. Given that Treasury Secretary Steven Mnuchin applauded Calabria’s new capital rule, it is safe to say that Mnuchin isn’t mad that Treasury will make less money on this new capital rule than it would have if Calabria would have finalized a less onerous capital rule:

I commend Director Mark Calabria and the FHFA for their work on this issue. Establishing regulatory capital requirements for both GSEs represents an important step toward bringing the conservatorships to an end. Appropriate capitalization of the GSEs will be critical to protecting taxpayers, fostering market discipline, promoting stability in the housing finance system, and ensuring durable consumer access to mortgage credit.

Maybe instead Treasury will get $20B-$40B from its warrants on the way out of conservatorship. That puts commons $3-6. I figure junior preferreds may convert subpar with common at $3 and then common are worth $5 as a possible workable scenario with this capital rule.

I own preferred shares of Fannie Mae and Freddie Mac. I had previously contemplated the possibility that FHFA came out with a onerous capital rule that basically forced Fannie and Freddie to hold more capital than any reasonable person could ever imagine them actually needing during Armageddon. OTCQB:FNMAS trades at around 35% of par. I expect that gets closer to 50% in the next month and a half and here is why. Fannie and Freddie are going to hire financial advisors who are going to be responsible for underwriting their capital raises. These financial advisors are going to make hundreds of millions of dollars if not billions in my opinion putting this together, and frankly, they deserve it because that’s what underwriting is. Underwriting securities offerings involves taking the risk of backing the capital raise transaction. It stands to reason therefore that firms that underwrite large and successful offerings stand to make bank.

In the spirit of making bank, if you work at the firm that wins the lead underwriting position here, you basically are eligible to make a multi-million-dollar bonus for putting together an order book that basically requires calling your buddies at pension funds who need securities like those being offered in this capital raise and connecting the dots. Hey, wait a second, that could be me.

That said, assume you’re at the firm that is the lead underwriter here. Once they win the deal, it’s basically a race to start lining up capital for this. As such, I expect the back channels for explanations for what is going to happen here to start getting people ready as quickly as possible. The word hasn’t yet really had hundreds of investment bankers building their bonuses around working out this deal and backing it with actual capital. That stands to change as soon as next month and that’s one reason why I think the preferred moved more on the announcement of the financial advisors than the capital rule, not to mention that it takes time to digest over 400 pages versus a quick blurb that underwriting financial advisors are going to get hired. It’s like trying to run after eating a salad versus a cheese burger.