500 Scientists: “There Is No Climate Emergency” 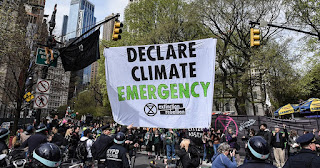 More than 500 scientists and professionals in related fields sent the Secretary-General of the United Nations an urgent message: “there’s no climate emergency.”

“There is no statistical evidence that global warming is intensifying hurricanes, floods, droughts and suchlike natural disasters, or making them more frequent,” the European Climate Declaration stated. “However, CO2-mitigation measures are as damaging as they are costly. For instance, wind turbines kill birds and bats, and palm-oil plantations destroy the biodiversity of the rainforests.”

‘The general-circulation models of climate on which international policy is at present founded are unfit for their purpose,” the Declaration states. “Therefore, it is cruel as well as imprudent to advocate the squandering of trillions on the basis of results from such immature models. Current climate policies pointlessly, grievously undermine the economic system, putting lives at risk in countries denied access to affordable, continuous electrical power.”

The scientists invited the Secretary-General of the United Nations to participate in a “constructive” debate early in 2020.

Signees of the declaration include:

Bullet points from the “European Climate Declaration” are also below.