Wells Fargo (WFC) has negative momentum and sentiment building against it on the stock market. While competing banks reported similar results of lower provisions and lower net interest income, sellers are ganging up on Wells Fargo.

The credit card scandal from a few years ago and the Federal Reserve cap are near-term headwinds hurting the stock. To offset the nearly $4 billion in profits it missed out on, the bank will need to cut costs. And because it cannot do that until after the elections, the stock will languish.

Investors may take advantage of the unique timing scenario by waiting until after the elections before buying shares. There are three reasons to continue considering Wells Fargo.

Wells Fargo was vague in sharing any of its cost-cutting plans. The bank is likely unwilling to cut tens of thousands of jobs before the election. It is unfair for the bank to get constrained in offsetting lost profits from the asset cap and the lower net interest income. Yet, becoming the primary target of politicians vying to win votes will prove costlier.

In the third-quarter conference call, analyst Steven Chubak at Wolfe Research asked, “as you begin executing on the cost plans and headcount reductions, what efforts you’re taking to help limit revenue attrition and your confidence level that you can achieve efficiency gains while protecting revenues?”

CEO John Shrewsberry cited the drop in NII as having a bigger relative impact on the bank than on the others because of its business mix. To offset the lost revenue, the bank will look into what segments to exit. It will make those decisions while considering the ones that will not damage customer relationships.

Improving the franchise is another goal but is nothing unique. Removing redundancies in multiple platforms across common products is achievable by embracing technology. Still, it will include many job cuts. On October 7, the 700 commercial job cuts will not attract attention. Conversely, a looming job cut will have caught the government’s attention if Wells had done it during the third quarter.

Wells Fargo said that while the jobless rate improved, consumer spending slowed. The slower pace of reopening and the stimulus program coming to an end hurt the economy. And even though WFC stock scores an A+ on profits, it fails on value and growth due to the restrictions:

Based on the scores alone, Bank of America (BAC) has a better score than Wells Fargo. Goldman (GS) fares well on growth, while Citigroup (C) has the best value among all the banks compared. The savvy “do-it-yourself” investor should not rely solely on quantitative analysis when deciding on what stocks to invest in. The art of stock picking involves picking the company characteristics that are favorable for the long term.

For Wells Fargo, its ugliest characteristic – the cross-selling credit card scandal – may become its greatest strength. Cleaning up the layers of management and firing those involved in the scandal is only a start. Unfortunately, to this day, the bank had to fire 100 dishonest staff over COVID-19 relief fund violations.

Value investors will know all too well how badly a controversial stock will fare years after a scandal. In the drug manufacturing space, Bausch Health (BHC) still trades at a steep discount to the sum of the parts. It announced a spinoff of B+L, which only boosted its stock price temporarily. Teva Pharmaceutical (TEVA) is still the target of opioid litigation. Even as the CEOs of those firms grow cash flow to pay down debt, investors are unwilling to accumulate shares. The same may be said for Wells Fargo stock.

READ ALSO  BP Midstream Partners: A 12% Distribution Yield With A Solid Base For Growth (NYSE:BPMP)

Below: Wells Fargo fared the worst in the last six months. A different time frame will show underperformance for different banks.

Wells Fargo earned 42 cents a share, which would annualize its price-to-earnings at 13.4 times. This is above that of Citi and on par with that of JPMorgan (JPM) stock. Cutting costs would increase profitability. Its top priority of implementing risk control and regulatory work should improve its image. Furthermore, Wells Fargo is keen on winning back its customers’ trust. The bank booked a $961 million customer remediation accrual. The amount increased because it expanded the customer population and the:

Period and/or the amount of reimbursement as part of our ongoing analysis of doing the right thing for our customers while resolving outstanding matters, as quickly as possible.

Although loans are down, deposits are up: 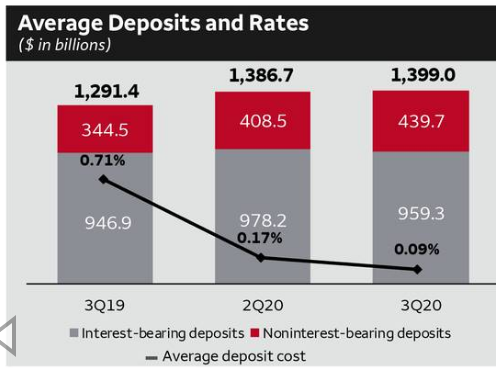 Loan deferrals are also down:

Since risks of COVID-19 lockdowns around the world are increasing, investors should brace for continued weakness in commercial real estate and auto loans. Both fell in Q3 and may not recover until businesses function normally. The vaccine availability, probably in late January 2021, should let businesses plan for a demand rebound when things return to normal.

Lower provisions and a decline in loan deferrals are positive developments for Wells Fargo. The stock will probably languish in the near term, along with the other banks, as markets waver ahead of the elections. Value investors should set an entry price that is below the 52-week low. Eventually, the stock will snap back as macro uncertainties clear and the bank executes on its turnaround plan.

Please [+]Follow me for coverage on busted up stocks. Also,  Click on the [x] to get real-time alerts. Take a free look at DIY three-bagger returns or more.

Disclosure: I/we have no positions in any stocks mentioned, but may initiate a long position in WFC over the next 72 hours. I wrote this article myself, and it expresses my own opinions. I am not receiving compensation for it (other than from Seeking Alpha). I have no business relationship with any company whose stock is mentioned in this article.