3 Reasons American Tower Corporation Could Be Worth Owning (NYSE:AMT)

If I were to own a REIT, American Tower Corporation (AMT) would be at the top of my list. It’s an interesting, stable business that appears to be relatively safe (certainly much more so than something like a mall REIT in 2020). The company is a market leader and has a strong history of compounding investors’ capital and increasing dividends. While the current yield is just 1.7%, for investors that don’t require large amounts of immediate income, I think AMT is a solid choice to add to one’s portfolio going forward.

American Tower Corporation rents out land and telecommunications towers to carriers, and can have up to three tenants renting out the same land and tower at the same time. Tenants are generally charged based on how much of the tower they’re using, although second and third tenants can often pay more than the first “anchor” tenant. 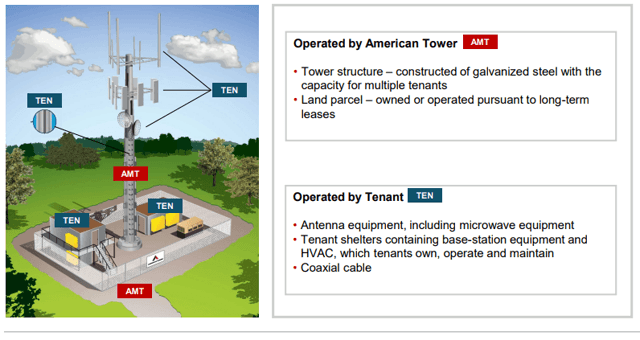 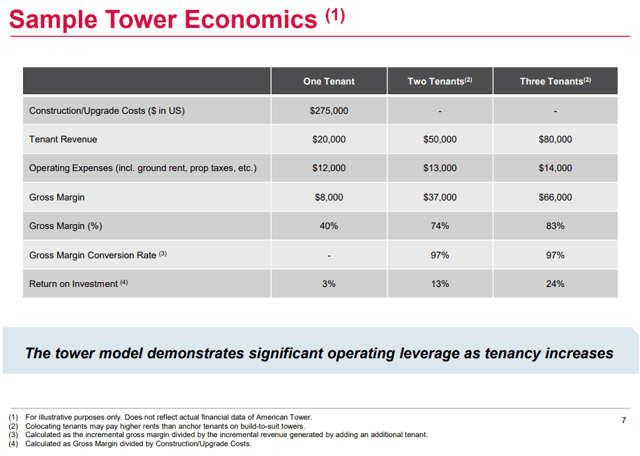 According to the company, and using its formulas, a tower with three tenants can generate an annual return on investment of 24%. The company calculates this as gross margin divided by construction costs. The cost to American Tower Corp. to add more tenants is virtually negligible, thus the more tenants it has, the better its margins are. This return can even increase to 32% in Africa and Asia.

Overall, it’s a business model that isn’t going anywhere anytime soon as wireless communications only continue to grow. Furthermore, American Tower Corp. is expanding into emerging markets that have extremely high potential, although the political and business environments in these emerging markets have more risk than developed markets. The company is compensated for increased risk through higher returns in these regions. Despite having a market cap over $100 billion and revenue near $8 billion, it still has a substantial growth runway to continue reinvesting with decent returns for a long time.

American Tower Corp. has consistently earned a return on invested capital (which the company defines as adjusted EBITDA less maintenance capital expenditures and corporate capital expenditures and cash taxes, divided by gross property, plant and equipment, intangible assets and goodwill) around 10%. In today’s environment, this is respectable, especially for a company as large as AMT. 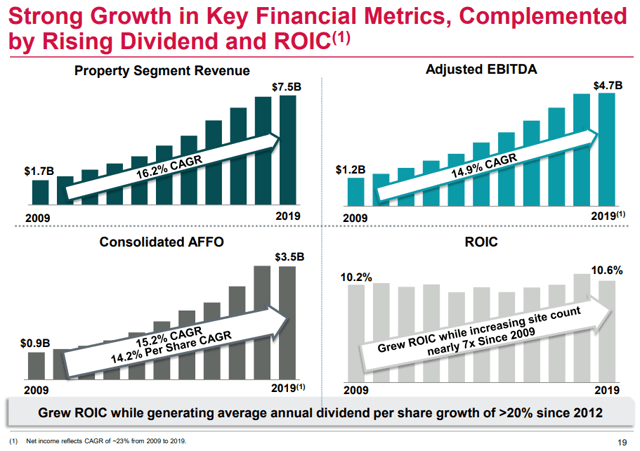 Revenue has grown at an impressive 16% over the last decade, although analysts are expecting this to slow down over the next 5 years. Adjusted EBITDA and AFFO have also grown double digits, but have lagged behind revenue slightly. 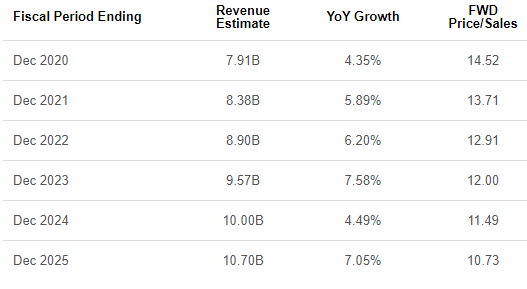 The near-term future is looking like it may not be as strong as the past few years growth-wise. This is definitely something investors should be aware of. However, I think there’s potential for the company to beat analyst expectations as 5G catches on and emerging markets continue to grow wireless telecommunications at a rapid pace. Only time will tell, but it’s a bet I’d be willing to make.

Finally, one of the most compelling things about AMT is that its contracts are usually non-cancellable and include price raises of 3% in the US (materially outpacing inflation recently). In international markets, contract escalations are tied to inflation. 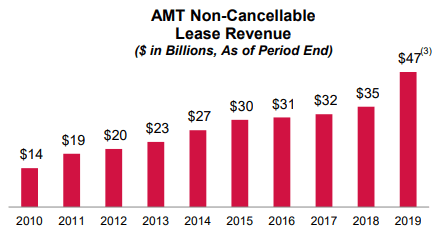 This results in extremely stable revenue for the company, even in difficult economic times. Recently in March, while some REITs got hammered, AMT’s shares pulled back a significant, but not disastrous, 30% from peak to trough.

American Tower Corporation is a solid dividend growth REIT that investors can comfortably hold as a core position in their portfolio. The dividend should continue to increase, and the company’s revenues tend to be highly reliable. Further expansion into emerging markets provides a respectable runway for the company to continue investing and growing.

I’ll be writing more articles on great (or sometimes not so great) stocks. If you enjoyed this article and wish to receive updates on my latest research, click “Follow” next to my name at the top of this article.