3 Blue Chip Stocks With Up To 8.6% Dividend Yield

Value investors have had quite the year so far with both peaks and valleys experienced in a matter of months. I recall a few days in March, during which I had the feeling of being a kid in a candy store with many stocks hitting levels that were previously unimaginable.

While the general market has largely recovered, there are still quite a few stocks that I think provide fundamental value at today’s prices. In fact, in my 12 years of investment experience, there has never been a time when I’ve felt everything was expensive. There is always something on sale.

The three stocks that I’m recommending today are all battleground stocks, with compelling bull and bear arguments. I’m bullish on all three as I believe that they are trading at attractive valuations, and I have the expectation that near-term issues will be worked out with the long-term thesis intact.

Considering that all three company names happen to start with the letter “A”, I couldn’t help but recall an old Warren Buffett saying. It goes something like this. When Buffett was asked what his secret was to becoming a successful investor, he said there is no secret, and that it all comes down to hard work and reading company annual reports, starting with the letter “A”! So, let’s get started! 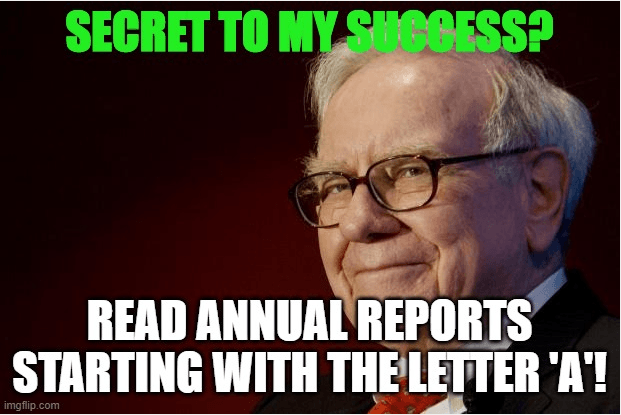 AbbVie (NYSE:ABBV) shareholders have certainly had a rough ride over the past two years due to concerns over biosimilar competition against its blockbuster drug, Humira, in Europe and the US. As seen below, shares have underperformed the S&P 500 market return by 15% over the two-year period.

I believe, however, that Humira concerns are somewhat overblown as it still grew 6% YoY in the latest quarter, driven by growth in the US, where it has patent exclusivity until 2023. This gives the company plenty of time to diversify away from the concentration with new drugs. In addition, it’s not as if Humira sales will go to zero when patents expire.

That’s because unlike traditional generics, which are chemically identical to the original drug, biosimilars are molecularly different from the original drug, thereby making them more expensive to develop than traditional generics. This, as a result, limits competition to only large, well-capitalized drug manufacturers who also need to recoup their own development costs. Due to these industry dynamics, Humira, while currently at 42% of sales, is still expected to be a top 10 selling drug for years after patent expiration.

AbbVie has a promising pipeline of drugs in the areas of psoriasis, rheumatoid arthritis, and oncology with potential for expansion into new treatment areas. Early results for Rinvoq, its rheumatoid arthritis drug, are promising, as it showed higher remission rates compared to Bristol-Myers’ (NYSE:BMY) Orencia according to a recent study published this month. 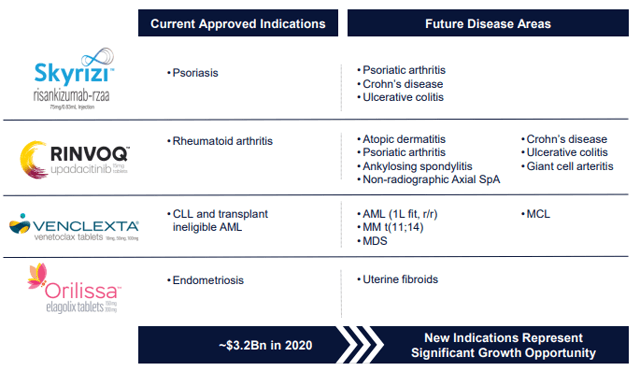 In addition, the recently closed Allergan acquisition will further broaden the product portfolio with the blockbuster Botox, which has both aesthetic and therapeutic applications such as for migraines, movement disorders, and overactive bladder. I particularly like Botox because it has become a household name and a cultural phenomenon. This bodes particularly well for the pricing power that this drug has due to its strong brand recognition.

Lastly, Allergan’s drugs in neuroscience and gastrointestinal health will provide further diversification. Not least of all, the database of scientific knowledge that comes with the acquisition will further strengthen future drug developments as well.

AbbVie’s current dividend rate is above 5% at a safe cash payout ratio of 48%. Management has committed to paying down its merger debt as it targets a Debt to EBITDA ratio of 2.5 by 2021, with further deleveraging through 2023. 2020 guidance is strong at 9.66 per share at the midpoint, representing an 8% YoY growth.

I see shares as currently undervalued and have a Buy rating at the current price of $92.46 and a PE ratio of just 9.6, with a one-year price target of $105. 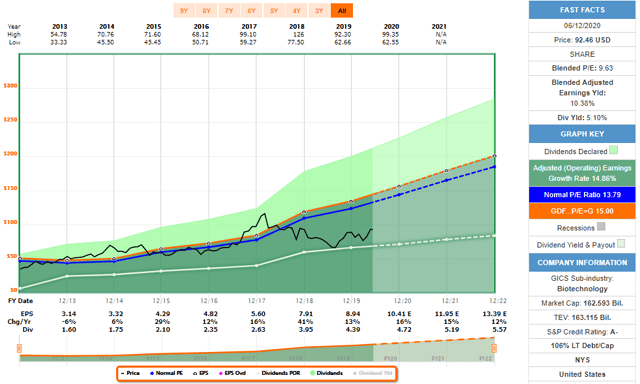 AT&T (NYSE:T) has been a battleground stock with bulls pointing to 5G and high potential for HBO Max, and bears questioning the media strategy and the overpriced $49 billion DirecTV acquisition at the peak of the linear TV market.

Last year, Elliott Management notably took a stake in AT&T and sent management a letter pressing for changes. The firm pointed that AT&T can achieve a $60 per share price by the end of 2021. It seems management and the board have so far heeded to Elliott’s strategic plan as it announced Randall Stephenson’s retirement to happen in July of this year.

So far, the company is executing well as its service revenues were up 2.5% YoY with 163,000 postpaid phone adds in the most recent quarter. The company is also making good progress on building out its 5G network, which is another of Elliott’s proposals as follows:

Fortunately, the ongoing 5G transition presents AT&T with a renewed opportunity to reset the wireless narrative and reclaim market leadership. AT&T today is in prime position to be the early market leader in 5G given its premier spectrum positioning, early LTE-Advanced work and recent network improvements (driven by the FirstNet build and its one-touch strategy).

I view Elliott Management’s involvement with the company as a positive as it has a strong track record turning around companies that have solid assets and in need of operational discipline, and I don’t see its $60 price target as being a pie-in-the-sky expectation.

READ ALSO  Von Greyerz: "Get Ready For The Biggest Collapse In Human History"

I’m also encouraged by the potential for HBO Max to capture substantial adoption in the marketplace despite its widely panned launch. I see the negativity around the launch as being short-sighted as negotiations are being worked on with streaming platforms such as Roku (NASDAQ:ROKU). This doesn’t take away the strong base of media content that AT&T possesses, which is just waiting for an avenue for deployment through HBO Max.

I have a Buy rating on shares at the current price of $30.50 and a PE of 8.9, with one-year price target of $38. I find the current 6.8% dividend yield to be attractive, especially in this low interest rate environment. The dividend is also safe with a cash payout ratio of 55% with room for slow bumps as the company continues to deleverage from the current 2.5x leverage ratio towards its long-term goal of 1.5x-2.0x. 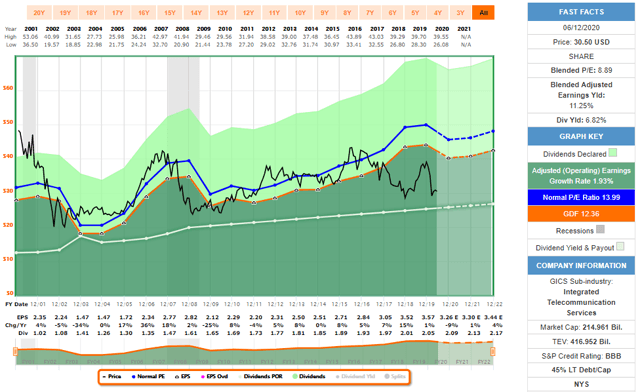 Lastly, I’m recommending Altria (NYSE:MO), which is one of my favorite income picks as it has a storied history of rewarding shareholders. Despite underperforming the S&P 500 by a wide margin in the short-term, it still managed to outperform the market since 2009 (after spinning off Philip Morris International (NYSE:PM)) when dividend reinvestment is factored in.

While there has been much focus on the company’s debt levels since the $12.8 billion Juul investment, which it clearly overpaid for, the Net Debt to EBITDA ratio as of the most recent quarter stands at just 2.2, which is below the 2.5 level that I consider to be safe. In addition, with the write-down of the Juul investment already being baked into the share price, I see upside potential as the cigarette volume declines can return to a more historical level due to the headline risks around vaping.

In addition, the U.S. cigarette market remains the largest and most attractive one. As Morningstar noted below, there is plenty of headroom for Altria to raise cigarette prices before the pricing inelasticity starts to become pressured:

Although it is in secular contraction, the U.S. cigarette market is a relatively attractive one. We forecast the volume decline rate of the U.S. cigarette to be around 4% per year, a slightly faster rate of decline than most markets. However, the ability to consistently price above the rate of volume declines should ensure that Altria can continue to increase its revenue, earnings, and dividend.

We estimate that the U.S. is the fourth most affordable market for cigarettes among the OECD countries, as measured by the minutes of labour required to meet the retail price of a pack of 20 sticks. This allows manufacturers ample room for raising prices over time. With a portfolio skewed to the premium segment, Altria must manage the price gap over the discount segment, so this pricing opportunity is likely to be realized over many years.

What’s perhaps most encouraging about Altria is the introduction of iQOS through a licensing agreement with Philip Morris International. Although the roll-out of iQOS has been slowed by the pandemic due to the closure of showroom stores, I believe the long-term growth story is intact, with the potential for even slowing down the net declines in tobacco consumption. As of now, Altria has the only FDA approved heat-not-burn product available for sale in the United States, giving it a strong first-mover advantage.

I have a Buy rating on Altria at the current price of $39.13 and a PE of 9.2, with a one-year price target of $50. I view the dividend of 8.6% to be very attractive and safe as the company prepares to roll out iQOS and deleverage its balance sheet. 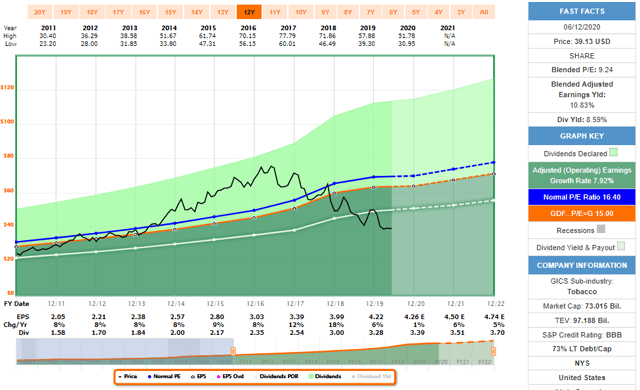 I hope you enjoyed my article on AbbVie, AT&T, and Altria. I believe all three stocks are trading at attractive value levels, with potential for strong share price appreciation. In addition, they provide a safe and high dividend yield that should reward investors for years to come.

Disclosure: I am/we are long T, MO. I wrote this article myself, and it expresses my own opinions. I am not receiving compensation for it (other than from Seeking Alpha). I have no business relationship with any company whose stock is mentioned in this article.