2020 Edition of Economic Freedom of the World is Out 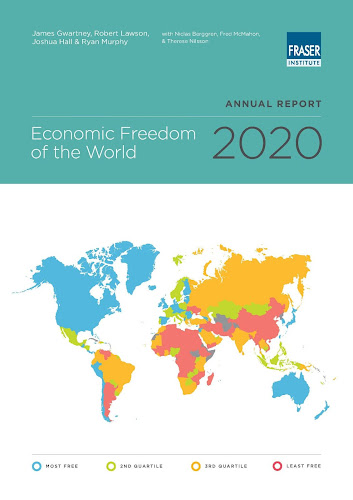 Hong Kong and Singapore retain the top two positions with a score of 8.94 and 8.65 out of 10, respectively in the 2020 edition of the Economic Freedom of the World report. The rest of this year’s top scores are for New Zealand, Switzerland, Australia, United States, Mauritius, Georgia, Canada, and Ireland.

Nations in the top quartile of economic freedom had an average per capita GDP of US$44,198 in 2018, compared to $5,754 for bottom quartile nations. Moreover, the average income of the poorest 10% in the most economically free nations is more than twice the average per capita income in the least free nations. Life expectancy is 80.3 years in the top quartile compared to 65.6 years in the bottom quartile.

That said, the guide does provide a rough guide as to which countries are most oppressive when it comes to the economy. Another reason most of these countries, especially the United States and Australia should be ranked lower (one hopes in the 2021 edition) is because of the oppressive COVID-19 business lockdowns.

The report is co-published by the Cato Institute, the Fraser Institute in Canada and more than 70 think tanks around the world.

Walter Block was instrumental in creating the report.